It has been a tough life for my mouse melons. Of the eight seedlings I started with, four have already perished* and the remaining four are still mightily underdeveloped for their age. But now that the weather has improved I feel it’s time for them to fly the nest and fight for survival among the various hazards they’ll encounter on the allotment.

Given their sensitive disposition I’ve decided against simply chucking them in the ground with the carefree abandon afforded to other allotment residents. Instead these flimsy fledglings are getting the very best home security a plant can receive… 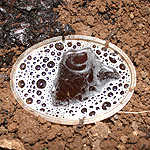 Beer moat
The biggest threat to their survival will be the slugs and snails who will be itching to get their slimy gums around some tender, new foliage. However, slugs also love beer. And beer kills slugs.
I could set traps with any old beery booze, but these plants deserve protection from the beeriest, booziest brew I can find. So when Rich proudly presented me with a couple of bottles of his Hambleton Best Bitter I new that I had to sacrifice my own drinking pleasure for the sake of the melons. 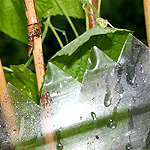 Plastic fort
An old water vessel has been turned into a handy cloche – constructed with an extra layer of slug defence. The plastic barrier will give the plants a little extra warmth (they’re Mexican, they can take it), while the spiky turrets should deter any inebriated slugs that have survived the beer bath. 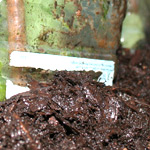 Mucky mulch
A layer of unidentified muck – acquired by Rich from an unnamed source –  has been scattered around the base of the plants. This will feed them vital nutrients and should also prevent weeds from invading their privacy. 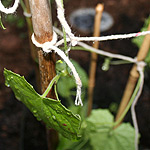 String support
A combination of sticks and string will allow the plants to sprawl in any direction that takes their fancy, keeping foliage off the ground.