Our broad bean plants have taken a battering this year. As seedlings they were bitten by frost and nibbled to near destruction by slugs. Then, having pulled through those traumas, the blackfly, pea weavils and chocolate spot got them. But they’re survivors and will soon be offering up their harvest. In the meantime here are 12 bugs (and fungus) that have been enjoying them before us… 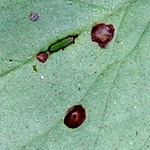 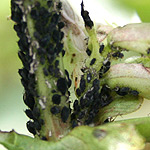 2. Blackfly: Small aphids. They attack in numbers. Read how to deal with them here. 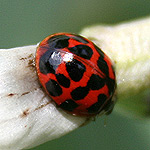 3. Harlequin Ladybird: Invasive ladybird which could be steadily extinguishing our native species. It also extinguishes blackfly. 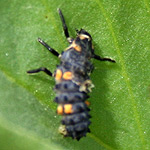 4. Harlequin Ladybird Larvae: Can you see why the children’s book company chose the adult ladybird for its logo? 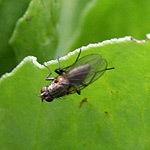 5. House Fly: Is there any point to the house fly? 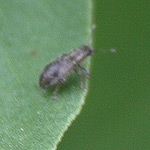 6. Pea Weavil: Nibbles ‘U’ shaped chunks from the edges of leaves. Like chocolate spot it’s not good news, but unlikely to signal the end of your plants. 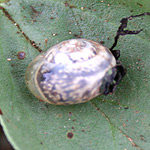 7. Snail: Seconds after his big moment in front of the cameras this snail was tragically killed under a size 10 boot. 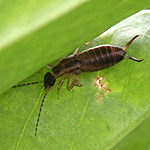 8. Earwig: Is there a more ridiculously named insect? 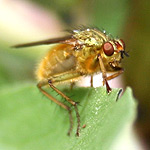 9. Unknown: Like a fly touched by midas. We fear it stings. 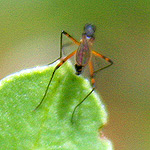 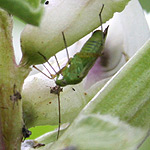 11. Unknown: It’s green and it can climb upside down. But we would be surprised if it was called the upside down green climbing insect. 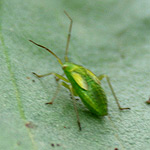 12. Unknown: Another green bug. The right way up. But that still isn’t helping us identify it.

Do you know what any of the unknown bugs are? Please let us know in the comments box below.