Seeing as our raspberry canes produce an abundance of fruit despite very little care and maintenance we thought it time to expand our soft fruit empire. We’ve also got new booze recipes in mind. Soft fruit, sold in pots as ‘bare roots’, should be planted between October and March before their growing season begins in earnest and the first new additions to our plot are blackcurrants. Here’s what we did…

1 Before digging the plants received a good soaking of water and were left to stand for a few hours.

2 We cleared the weeds and dug a hole roughly twice the width and depth of each plant’s pot.

3 This hole was partially back-filled with a mix of soil and well rotted manure.

4 The plants were eased out of their pots and sunk into the hole, with more soil and manure added so the level of earth was a few inches higher up the stems than the corresponding pot level.

5 Because we used ground that was previously home to weeds we surrounded the blackcurrants with a layer of cardboard which was then covered with compost – this will help suppress weeds and the cardboard will gradually decompose, improving the condition of the soil and steadily releasing the compost’s nutrients towards the fruit’s roots.

6 Our newly homed currant bushes received another thorough watering and will continue to do so until they’ve fully adjusted to their new surroundings.

Many growers more experienced than us recommend pruning newly planted fruit bushes to the ground. The theory goes that this will allow energies to be concentrated to new growth which won’t fruit until the following year but should make for stronger plants. We’ve ignored this advice and are going to see if we get a harvest this summer. 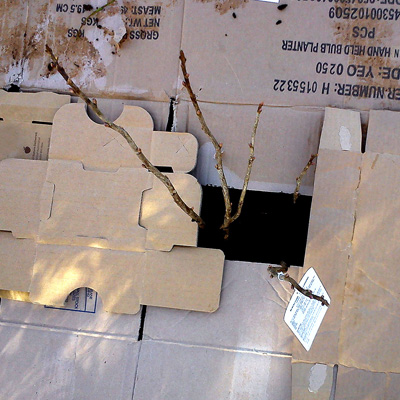 The newly planted currants surrounded by cardboard. Ideally you wouldn’t leave small gaps like we have done… 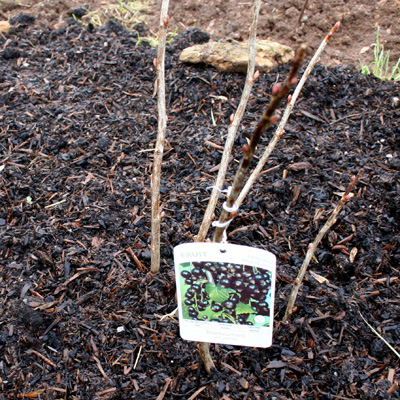 The cardboard is covered with compost. Adds nutrients, suppresses weeds and means at least one part of the plot looks quite tidy.