Who, or what, first inspired you to forage and create your own drinks?
Coming from the Lyth Valley in Cumbria there were always plenty of damsons around. Along with jams and chutneys etc my mother always made damson gin as I think lots of country people do. I grew up on a farm and even though I now live in London I’ve been lucky enough to never have the link between land and food broken. In the 70’s my father made wine from rose petals, blackberries or elderberries. And I’ve always seen growing fruit and veg, and foraging as part an everyday way of getting food. Whether it’s nipping off a bit of overhanging rosemary in passing for my roasties from an overgrown front garden, hunting in Epping forest for sloes or growing my own on the allotment.

A woman’s mind often turns to a potent but tasty drink, so I enjoyed experimenting with fruit and alcohol and subjected friends to rigorous and highly scientific tasting sessions. Mother’s Ruin all started as the result of a rather drunken evening round the fire trying out each other’s damson gin recipes. Someone said you should sell that. I believed them. It’s all their fault.

Can you distinguish a bullace from a sloe at 50 paces?
Probably not from 50 paces as it’s all about the prickles… If you’re not getting shredded it’s a bullace.

Some folk insist on only picking sloes after the first frost. Is this necessary?
No! You can be your own cold weather front – I put my sloes in the freezer which does the job nicely and also means you don’t have to prick them all as the skins split when they thaw in the gin.

We’ve calculated that every pint of cider we make contains an average of 10 apples. You must have to pick buckets of sloes…?
I pick a lot of sloes over a period of about 6-8 weeks. A lot. I shamelessly exploit family members as pickers and rope in neighbour’s freezers to stash my blue black bounty. In the Autumn I can be found out and about in the margin lands of East London, looking for all the world like a dull middle aged slightly scruffy woman, with my trusty shopping trolley which holds a good 20lbs.

What do you do with your leftover fruit after you strain off the alcohol?
To the victor the spoils I say! Damsons fat with gin and sugar are a fine and lucious delicacy. Because I leave them in the gin for so long mostly they are shrivelled and have released all juice and flavour into the liquor. But there is usually a small handful that are still tender. These get eaten quite quickly without any further adornment (though my mother used to make trifle out of them – which I can highly recommend as long as you have a designated driver organised).

With soft fruit, eg vodka soaked raspberries I have tried making chocolates – which I think could be great, but it’s harder than it looks and mostly creates a sticky delicious mess.

Blackthorn splinters can be nasty, we trust your workplace complies with all the relevant health and safety rules?
Yes, I have been conducting a thorough risk assessment out along the banks of the River Lea, along with thorns we also have commuting cyclists and pit bulls to contend with. All seem to be ameliorated by stout boots and thick sleeves.

Theres a real buzz coming from the growing London drinks industry. Battersea’s London Distillery Company are promising to produce the capital’s first whisky for 50 years, Enfield will soon be reeking of Forty Hall Vineyard’s crushed grapes, not forgetting the rapid growth of City based micro breweries. Do you think we are entering a golden age for British drinks producers?
I think we are, it’s very exciting! People seem to want to try things that have a real connection to where they live and this includes alcohol! High quality local ingredients, creative and witty producers who are real people rather than faceless supermarkets, are all catching the imagination. There’s a new micro brewery in a pub round the corner from me in Walthamstow called Wild Card, and a tiny gin producer called Little Bird from Portobello that are also producing some amazing stuff.

London has had a long and colourful association with gin, and there is a current desire for all things foraged. Your Walthamstow market ‘Gin Palace’ sounds bang on the money. Are sales brisk, and who’s buying?
I’ve had a really good reception. Lots of interest and lots of people coming in to the Gin Palace to chat about fruit growing (and to try and winkle my secret sloe picking spots out of me…), booze making and cocktail recipes which has been great. People seem to really like the humour in it, but also that it isn’t a big brand and that many of the ingredients come from the land around them. Which I suppose in London is a rare thing. Sales go up and down a bit, but generally have been strong and to my amazement I’ve been in profit in the first 6 months of setting up (ok, it’s only by about 50p, but I thought it would take years to get to that point). All sorts of people buy, from East London hipsters to people looking for a present for their mother-in-law for mother’s day.

Nick makes horseradish vodka that can clean sinuses and unblock drains in equal measure. We think we may have a new line for you. What are our chances?
It sounds most stimulating! Perhaps we could swap recipes – I’ve been trying a variety of experiments;

– Rosemary and bay in vodka, appalling – but with a mind altering quality which makes the world look quite shiny.

After a hard days foraging, what is your drink of choice? Be honest, now…
I need to keep the palate and brain bright for testing purposes so I lay off the liqueurs. A Double Dragon Ale from Felinfoel Brewery or Black Sheep Ale from Masham hit the spot… 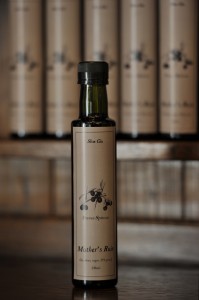 The ruin of many a Mother.

For more information on Mother’s Ruin Gin, head over to http://www.mothersruin.net or pop down to the Mother’s Ruin East London Gin Palace, which is situated in Wood Street Market in Walthamstow E17.