Chelsea Monroe-Cassel is the food fanatic, brewer and blogger responsible for The Inn at the Crossroads food blog and co-author of The Official Game of Thrones Cookbook.
We sit down for a Direwolf scone and a nice chat.
WARNING: This interview contains references to bastards, dog sausages and swan-eating.

How did you come up with the concept of  ‘The Inn at the Crossroads’ ?

Sariann and I started the blog because we were hungry. One night, we were trying to decide what to make for dinner, and couldn’t make up our minds. Instead, we started thinking about dessert, and thus our first attempt at lemoncakes came about. We had such a good time researching and testing those lemoncakes that we decided to try a few other dishes. Things quickly got out of hand, and the whole project snowballed into the blog and cookbook!
I’ve always loved immersive fantasy, and this adventure combined a number of my varied interests and skill sets, as well as adding a few more.

The Inn at the Crossroads is a location in the Song of Ice and Fire series. Although a lot of dodgy events happen there, I love the idea of a rustic country inn, with the rough-hewn beams and lots of savory dishes. At the time that Sariann and I started the blog, we also lived on the corner of two streets, so it seemed even more appropriate.

You’re inspiration stems from George RR Martins‘ very evocative prose. How easy was it to get him onboard for your book project?

GRRM loves his food, as is apparent to anyone who reads his books. I wrote him an email a few months after starting the blog, just to let him know how much we appreciated his work, and about our project. I also let him know that if he were ever to consider an official Game of Thrones cookbook, we were very much available. I didn’t actually expect him to write back, and was delighted when he did. I was later excited beyond belief when he said that he would mention the idea of a cookbook to his publishers.

Many of your featured dishes are adapted from recipes of medieval origin . How do you go about your historical research?

Each of the historical recipes has a heck of a lot of work behind it. I start by looking for medieval recipes that roughly match the description in the novel. When considering ingredients, I take into account the climate, geography, culture, trade routes, etc. of the place where the dish is being eaten in the book, and let those factors guide me. I think of it as a sort of “fictional locavore” approach. Once I have an initial recipe that looks good, the testing begins. Sometimes a dish is great the very first time, and sometimes it takes a few tries to perfect it.

Who tests your trial recipes to ensure a meal doesn’t lead to a ‘Game of Groans’?

We do! Plus a very happy group of friends, and one very fat cat. But it’s not always awesome; during the big crunch before the cookbook deadline, there were times when I’d be making five dishes or more each day. After so much food, it took a while before I could enjoy a pork pie again, but now they’re right back to being one of my favorite dishes. Getting to think about and eat these dishes is a really fun way to sort out dinner each week!

There’s a huge UK ‘Game of Thrones’ fan-base. Are there any plans to publish ‘A Feast of Fire and Ice’ over here?

Harper Voyager UK did a limited run of the cookbook, and we’re putting pressure on them to put out more. Unfortunately, it’ll be a while, and that version is still in US measurements! I’d love to see the publishers put out a metric version, but that’s up to them!

Have you a culinary eye on any other works of fiction? ‘Lord of the Pies’, perhaps? ‘War and Peas?’ ‘Hogshead Revisited’? ‘Cress of the d’ Urbervilles’?

Ha! It’s funny you ask, because I can’t read any book now without being on the lookout for food descriptions. I’ve explored a number of those on my third blog (yes, I’m a compulsive blog starter!), Food Through the Pages. Some of my favorite foodie series include the Gentlemen Bastards series by Scott Lynch, and the Vlad Taltos series by Steven Brust.

I’ve also got another exciting project in the works, but all I’ll say about that for now is that by late summer I will have dined on the finest taters and coney stew in the Shire.*

You have recently launched a companion beverage site, ‘A Game of Brews‘. This excites us. What’s on your ‘must brew’ list?

I LOVE brewing. Clearly. It was starting to take over the IATC site, so I decided to give the hobby room to grow on its own blog. On my list were Heather Ale, Gruit, and a variety of meads. From your site (whoo!) I’ve added sloe gin and subsequent slider, but will have to mail order enough dried sloe berries to make it work. Oh, the colonies.

I still haven’t quite nailed a concord grape mead (grape pies are a regional specialty in my family), but I hope to get it right this autumn. I’ve also had fun and great success trying out some of the stranger brew recipes that I’ve come across in historical cookbooks. Red apple wine with beets, lavender, and rosemary tops that list, along with an imitation port, an apple beer, and so on. Coming up with recipes that use spent grain and the yeasty beer sediments has also proved a fun goal.

We’ve followed a few old fashioned drinks recipes ourselves. Some of them turned out eye-wateringly bad.  Are any that you have attempted, too hideous to publish?

Spruce beer. It was absolutely undrinkable, like a floor cleaning solution that reeked of pine-smell. My first couple of meads were also not good, but in more of a boring sense. Overly dry and uninteresting. I’ve since learned that it’s tough to have too much honey, and that ale yeast is my friend.

When can we expect to see ‘Game of Brews- The Book’?

That would make me so happy! I’d say that it would take me a bit of time yet to accumulate enough brewing recipes for it. I’m a huge fan of mead, but it can take a long time to age and really come into its own. In the meantime, all the recipes and other info are going up on the blog for free, where I hope that lots of other brewers and Game of Thrones fans find them useful.

We’ve been laughing at your ‘dishes that beat us‘ section on your website. Maybe we could help out…
A footpath near us contains many ‘dog sausages’, and there’s plenty of spare swans floating about on the River Avon, would you like us to export some raw ingredients ?

Can’t you still technically get arrested for bagging one of the Queen’s swans? I did look into the swan thing here, and in some states it’s legal to hunt them. The best I could find was an online source that would deliver a live (and presumably very angry) swan for around $1,000. Not quite in the budget, but I’ll probably substitute goose or other poultry for those tasty sounding dishes.

Finally, what ‘s the best way to skin a rabbit?**

Ask Osha or Meera Reed to do it! 😉

*Awesome! We hope she means Wilt-SHIRE
** Nerdy question. If you’ve never watched Game of Thrones, this will mean NOTHING 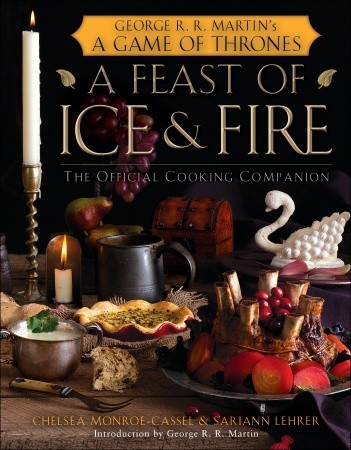 A Feast of Ice & Fire, Sadly not available in the UK… yet.