Believe it or not, there are few things that can divert our attention from tending to our allotment (stuff on TV, the pub etc.) but this summer, the World Cup is the biggest threat to our vulnerable veg and an event which dramatically increases the chance of us being served a big old eviction notice for our unruly, unkempt plot.
We can’t resist a bit of footy. In fact its a constant battle not to boot each other cabbages skywards on each allotment visit*. We have therefore decided to channel this excitement and produce pretend stickers with a booze recipe and/or recommendation for EVERY World Cup finalist. An impossibe task? Maybe. Will we give up half way through? Quite possibly.

Return to this page throughout the tournament … we shall be adding recipe sticker things as we go.

*“No, I have no idea what happened to your Savoys, Nick… maybe slugs came and took them in the night?”

Giddy with World Cup fever after viewing the opening match, we samba-ed over to our local booze emporium and acquired a bottle of cachaca (Brazilian white rum) with a desire to create some foxy latino cocktails. As every other Sunday supplement under the sun has covered the making of a caipirinha, our aim was to perform a Neymar-esque body swerve and make instead the awesomely monikered ‘friendly cashew’ cocktail. Having half read the recipe, we went out and bought some vastly overpriced cashew nuts only to find the recipe demands the fruit, not the nuts. Idiots.
But not to worry!** The caipirinha is a mighty fine drink, worthy of its place in our ‘World Cup o’ Booze, pretend sticker album. Try it yourself, using the marvellous recipe, below.

The second booze sticker is in honour of the Germans, who at the time of writing have just humped Portugal 4-0 and in doing so, made Cristiano Ronaldo cry. Great! It details one of our all-time favorite German boozes, the Andechs dopplebok. We urge you to seek it out, at all costs.

**insert here the sound of a car reversing at high speed. 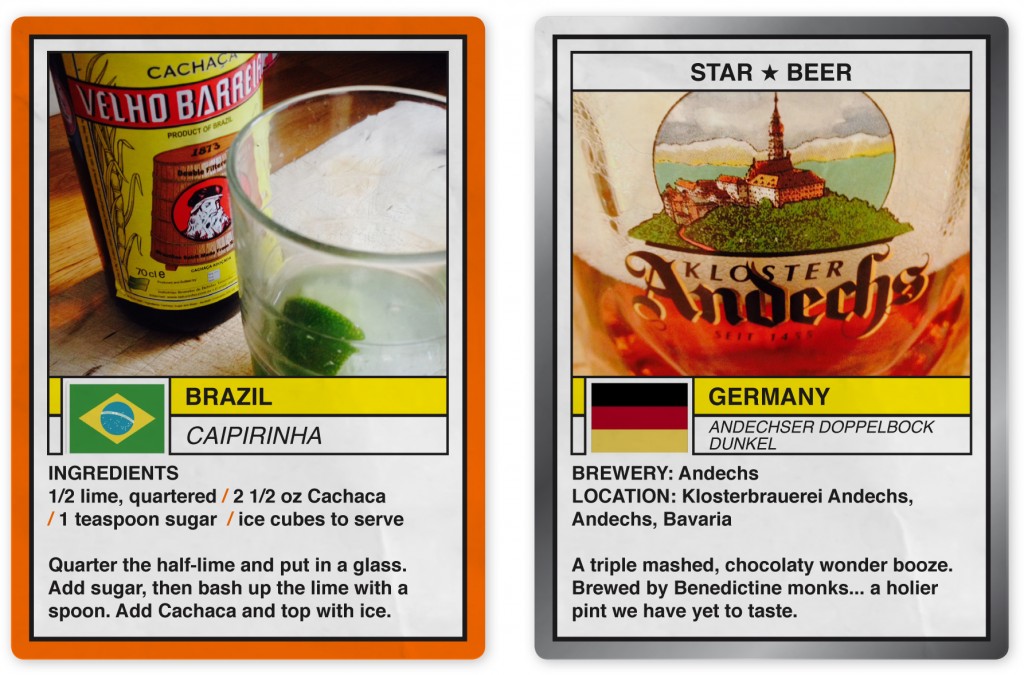 Two more World Cup recipes!  See below for our YOU ESS HEY bourbon-based ‘Old Fashioned‘, just like the one expertly constructed by Mr Don Draper on the suave retro misog-athon, ‘Mad Men’.

And in honour of the Dutch, we bring you a super ‘Gin Fizz’. The Dutch love a drop of jenever, and for this cocktail you’ll need to plunder your sloe gin reserves. (Not that any of ours lasts beyond Christmas) 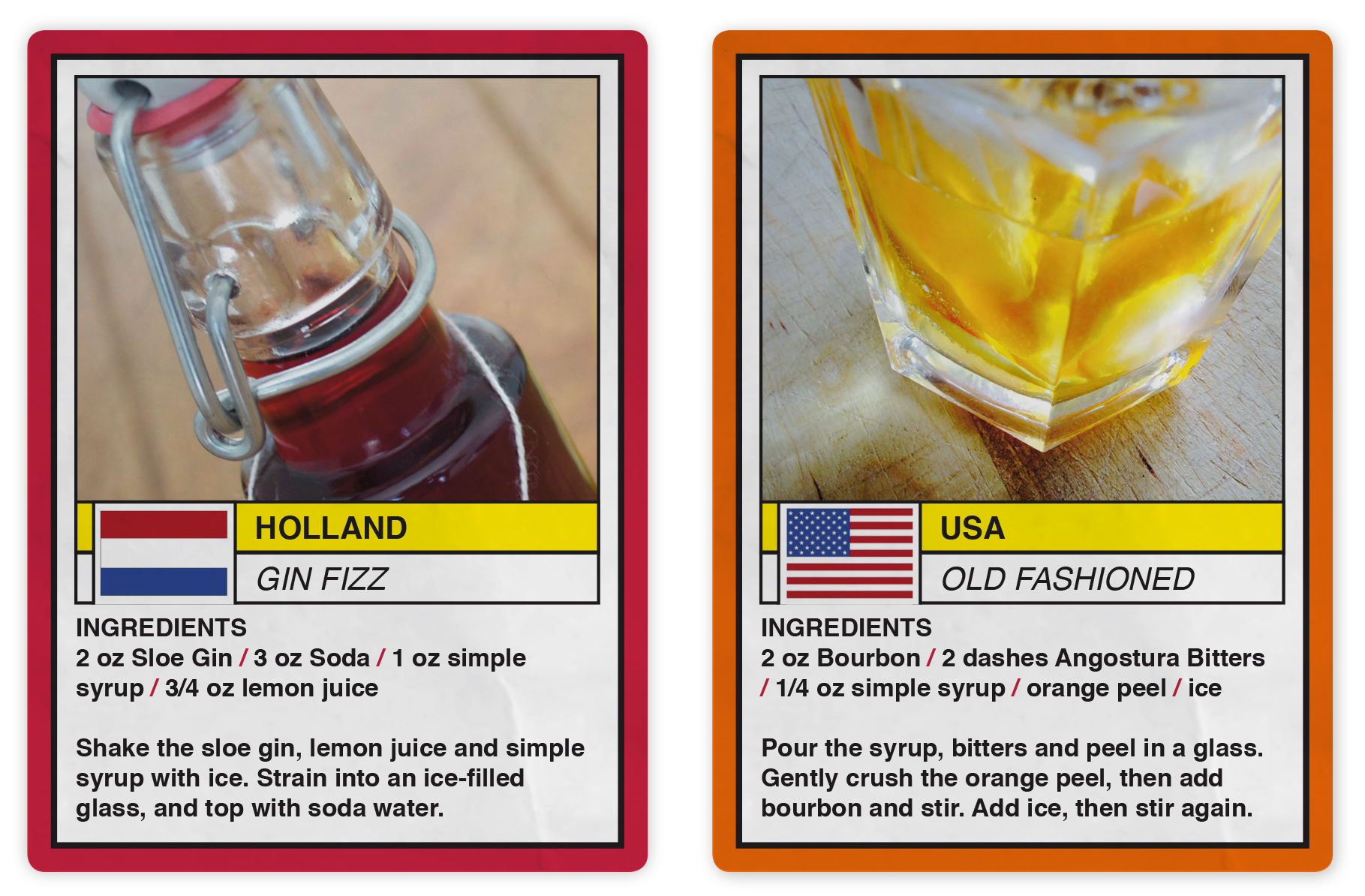 World Cup Booze factoid: #1
At $0.59, the Ukraine is the cheapest place to by a bottle of beer.
(0.5 litre bottle of domestic beer, based on Numbeo.com crowdsourced data)

Two more. First up, a classic Pisco Sour. This drink originated in deepest, darkest Peru, where the cocktail is traditionally made with the addition of egg whites and bitters. The Chilean version omits these two ingredients and we think is a better drink for it. Besides, Peru aren’t in the World Cup.

Our second World Cup booze hails from Belgium, and is one of the many consumed by Thirsty Nick on his recent trip to Antwerp. Note the blurred, low quality photo, a direct result of one to many Belgian brews. This was his second… 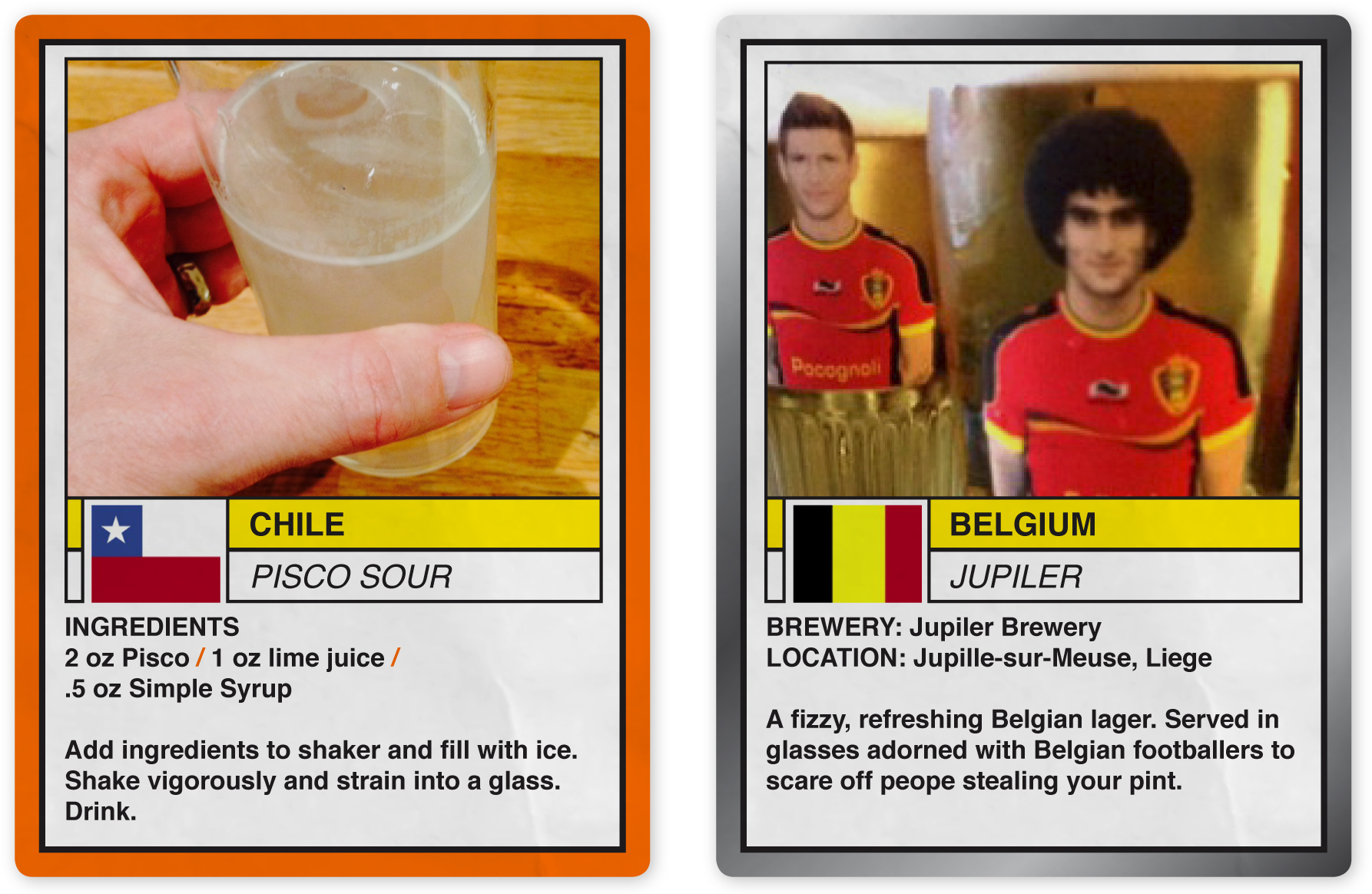 Time for another pair of World Cup boozes. France are first up and Sacre bleu! Nick has abandoned the cider of his West Country roots and started tucking into some ‘cidre’ from across the channel. His excuse? He put a hefty wager* on the French to lift the trophy and wanted to toast their progress with something fizzy.
* 50p

And following the French effort comes an eye-watering ‘cocktail’ from Russia. Hardened mixologists may struggle with the method, but hopefully we’ve translated it in simple terms. Garnish with a cherry for special occasions. 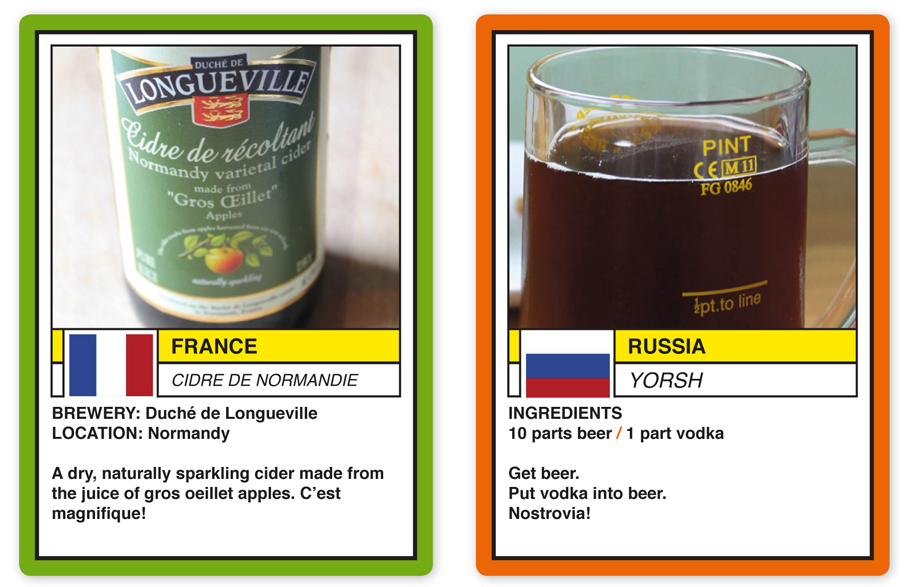 A quartet of boozes for the quarter finals…

Representing Nigeria, we bring you the ubiquitous ‘chapman’. This supermarket sangria-style cocktail is usually made sans-alcohol, but we’ve sneaked in a shot of bacardi to get the party started.

A splendid bottle of Coopers Sparkling ale is our Australian amber nectar, whilst a swish Swiss brew hailing from the 1936 Brewery is sending us cuckoo.

Finally, we bring you a mighty fine basil mojito recipe, proving that Costa Rica is not just about coffee beans and Ocelots. 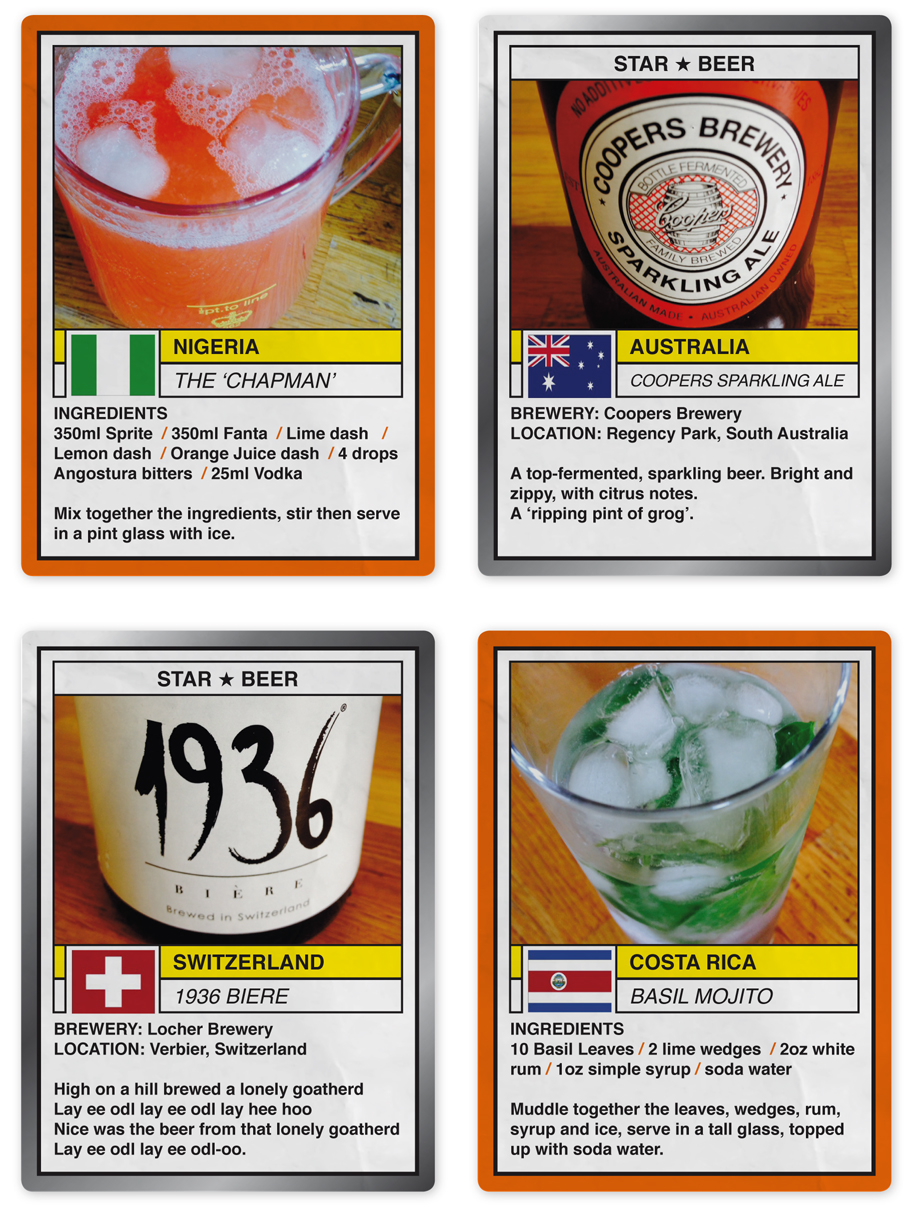 Another four. And yes, we really are spoiling you…

It came from Japan: a showcase pilsner from one of Japan’s leading breweries.

Mexico: The eagle-eyed among you will have already identified the Tequila Sunrise, starrin’ slowly ‘cross this blog post.

Responsible for more headaches than the Mensa Christmas annual, our Greek entry is a gift from Dionysus himself.

And showcasing Bosina & Herzegovina, we present to you the fermented Juniper drink known as Smreka*. 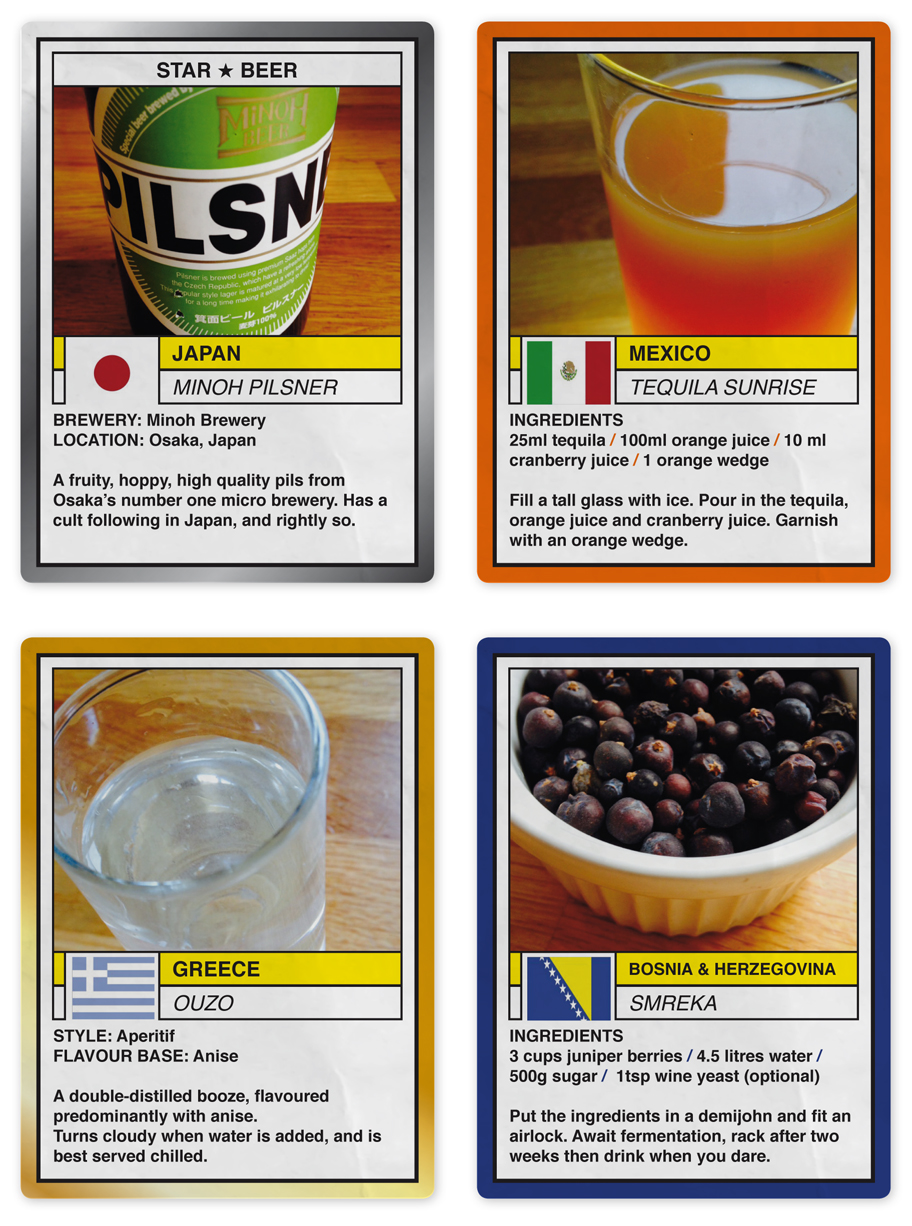 For our first offering, Nick went out of his way and bravely mixed his drinks just so he could get a picture of our Portuguese beer.
“The hangover wasn’t worth it”, he croaked.

Second up is a Columbian Refajo, which is either a beer cocktail or posh shandy, depending upon which way you look at it.

A steaming mug of cinnamon flavoured booze is our Ecuadorian entry, which sounds just the ticket for a sultry Quito evening.

Finally, our Korean entry has the enviable honour of being the world’s best selling liquor. IN THE WORLD. Meaning that it’s solely responsible for more hangovers than any other drink. And that includes Buckfast. 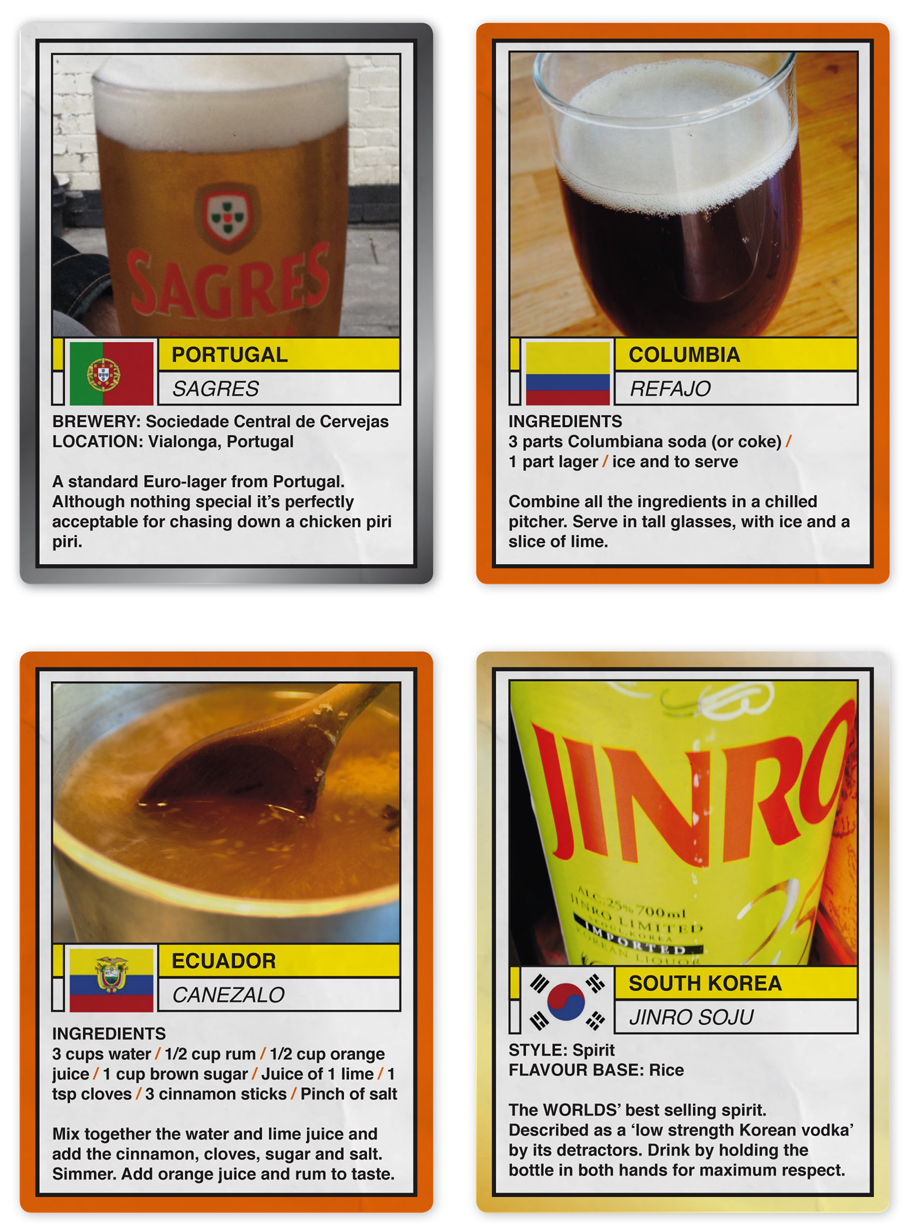 Who’s stupid idea was this? Another four goddamn stickers…

Croatia: Home to Dalmatian dogs, booze-hound Prosinecki, and a rather nice beer.

Honduras: They bring us this stupendously named cocktail. But is it a drink or desert?

Italy: Hailing from Venice, this prosecco-laden fizzy treat is well worth a punt. Geddit?

And finally, Cameroon. Ever wondered how Roger Milla got his moves? It was nights spent in Cameroonian dance halls, fuelled by this very spirit.* 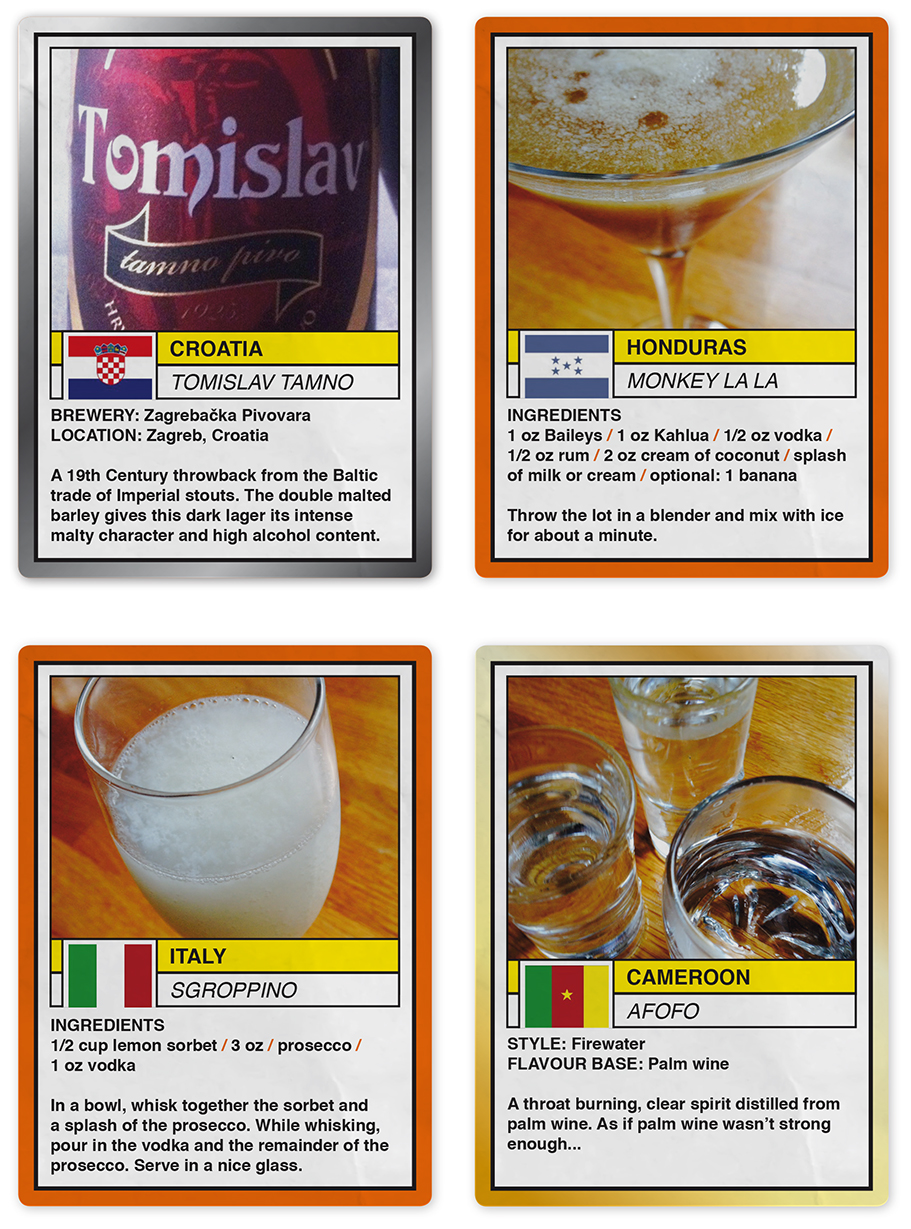 From A Coruña comes this tasty marzen, guaranteed to quench thirsts drier than a Spanish Sahara.

Ivory Coast are next up, with a drink so revered, it has it’s own music genre. (And no, we’re not talking about scrumpy and western)

An anaemic sangria-esque fruity brew is our offering from Uruguay. It contains a stack of fruit so there’s plenty to chew on in-between sips.

Finally, a Ghanaian home-brew that will rock your socks (and quite possibly rot your socks). 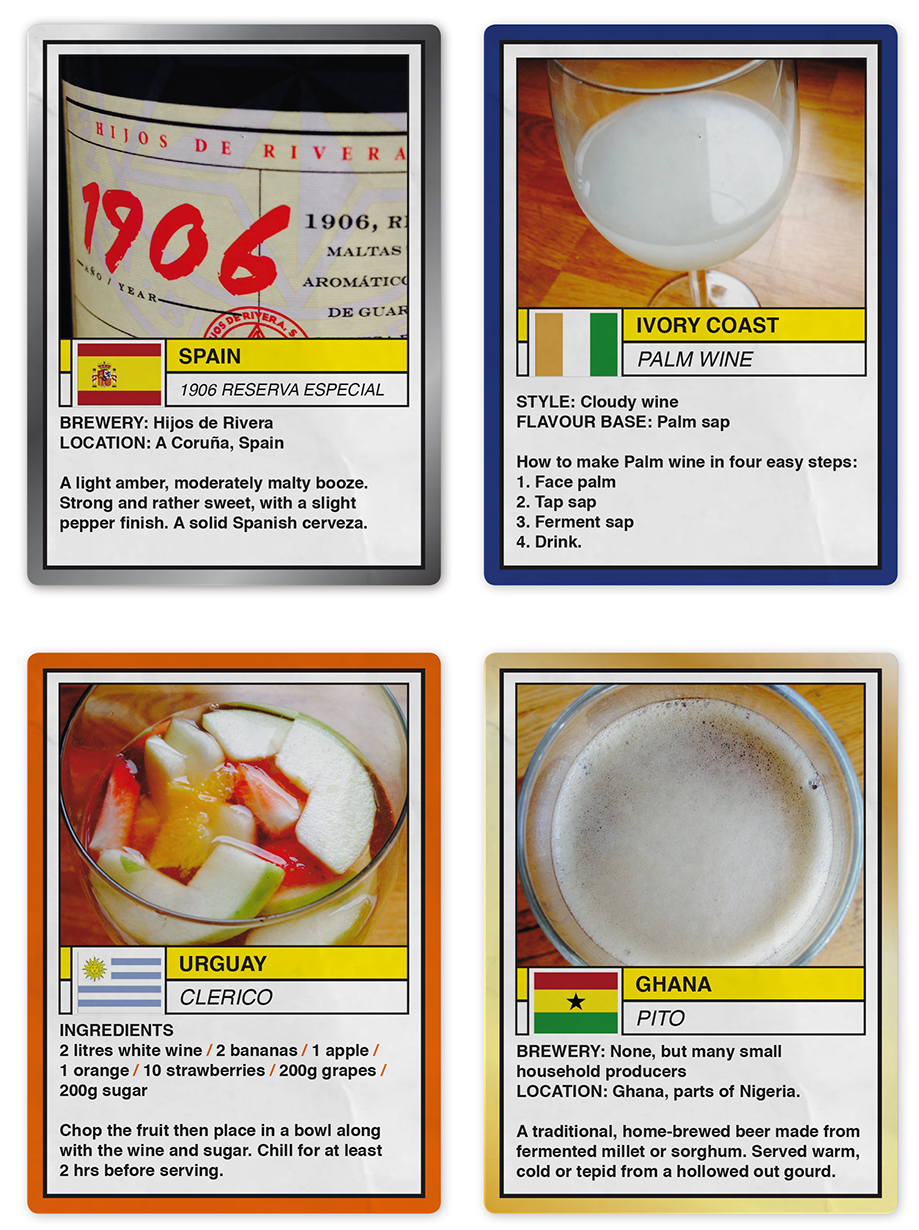 13 July
“The crowd are on their feet…they think the ‘Thirsty Gardeners World Cup o Booze’ is all over….”

FINALLY. The FINAL four. Just in time for the FINAL.

Here comes the England entry! Almost last…just like their World Cup placing in this years tournament. But unlike the shambolic rubbish witnessed on the pitch, we bring you one of the finest ciders money can buy.

An ALGERIAN wine, you say? Yes, we say in return. Algeria was once the Worlds leading wine exporter, until the French stepped in and spoilt it all.

The Italians may have provided the spirit, but this bittersweet booze from Buenos Aires is the drink of choice for any self respecting Argentinian.

Aaaaaaaaand last but not least, the most sensible beverage of all our World Cup entries. Hailing from Iran, this lovely cup of alcohol-free chai is just the ticket for curing your post-tournament, booze induced blues. 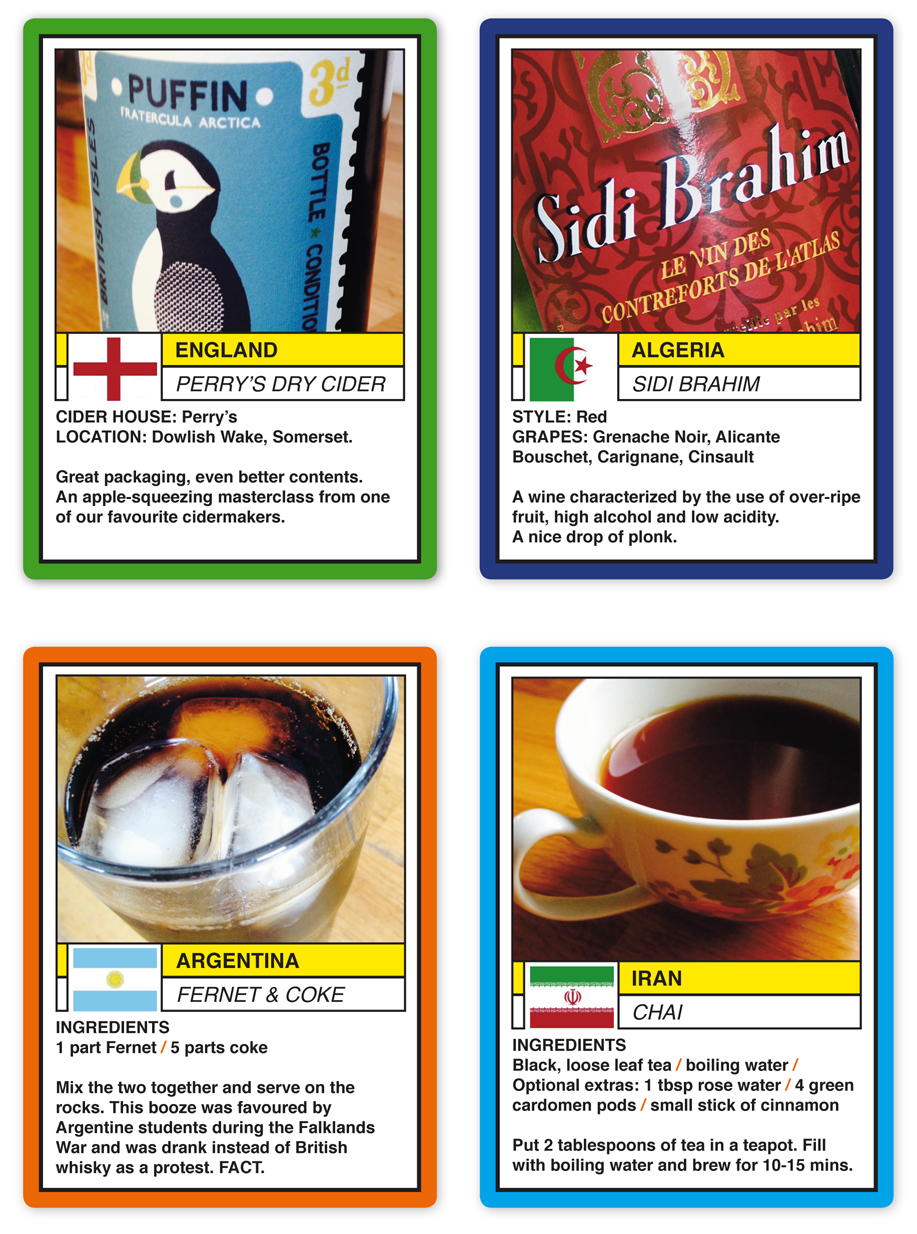 Thank you, and goodnight.