Most people are familiar with the traditional British boozy punch known as the ‘summer cup’ (Pimm’s being the most famous). But fewer folk are aware of its more unruly, appley cousin, the ‘cider cup’. With the surge of interest in fermented apple juice showing no sign of abating, we reckon it’s high time this summer mash up received a revival.

As luck would have it, we recently got a call from British food purveyors Waitrose, who have been asking bloggers to send them their favourite traditional British summer recipes. If we can convince the top brass at Waitrose that the cider cup is a serious tipple, then surely that revival is well underway. So we hot footed it to our nearest branch, raided their shelves and can now present you with our interpretation of the next big thing in summer party drinking.

Locate your summeriest looking jug and place within two tablespoons of sugar, the rind of one lemon and the juice of half a lemon (the same lemon for both is probably a wise idea). To this add around 150ml brandy or, if you’re feeling fruity, sloe gin. Give it a good stir to dissolve the sugar then pour in a litre of cider and some slices of cucumber. Place in the fridge to chill.

To serve, pour the cold booze into a glass until it’s around two thirds full and top up with soda water. Garnish with a slice of apple and guzzle. Easy. 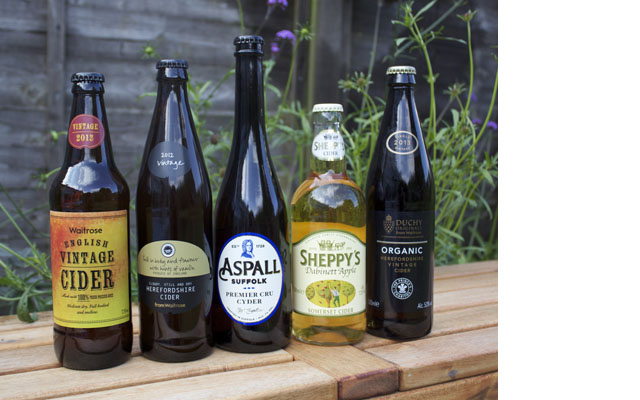 Although any cider will do for this recipe we thought it only right that we should test drive Waitrose’s finest beverages to see which one turned out best. Being a big supermarket chain the ciders they sell come from some of the country’s larger producers (Waitrose own brand of ciders is made by Westons) and are therefore unlikely to match the rustic oomph of those from the olden days, when this recipe first did the rounds. But that doesn’t mean these five drinks are without merit – they’re all decent tipples in their own right, although only one can be deemed the best…

Duchy originals organic Herefordshire vintage cider. 5.0%
A pleasant drinking cider with a light honeyed apple flavour and just a touch of musty tannin on the finish. It’s good, but the cidery flavours do get a bit lost in the cider cup.

Aspall premier cru cyder. 7%
Hailing from Suffolk this has a crisper acidic flavour with less tannin than the West Country offerings. Bright and summery in its own right it also makes for a refreshing cider cup.

Sheppey’s dabinett Somerset cider. 7.2%
This single variety cider is uncomplicated, juicy and a good first choice for anyone who is unfamiliar with strong West Country ciders. It’s also a good choice for mixing with brandy and soda.

Waitrose Herefordshire cider, 2012 vintage. 7%
Another Herefordshire cider (Westons are based in the county) this pours cloudy, is the driest of the five we tried, and the most likely to induce involuntary straw chewing. Not the most sophisticated beverage but perfect for a knockout summer punch. The winner!

Note: Waitrose supplied vouchers for the purchase of goods to all bloggers taking part in the challenge. We took full advantage by plundering all the cider as well.