Enough is enough. Being greeted with an avalanche of plant pots and general gardening detritus every time the shed door is opened has started to wear very thin indeed. Almost as thin as this year’s carrot crop. Trying to prize out a hoe from the belly of the shed has now resembled playing a giant, rubbish game of Kerplunk, so in a concerted effort to reign in some kind of order, alternative storage arrangements have been researched and acted upon.

We have limited garden space with which to relinquish for the purposes of extra storage, so after much deliberation and gnashing of teeth, we have opted for a compact Keter ‘mini store-it-out’, more commonly employed in our neighborhood as a device to stop degenerate badgers kicking over and defiling dustbins. We, however, have grander plans…
It will house our cider-press, barrels and bottles during the summer months to free up valuable shed space, but this autumn we will be trialing it as a place in which to ferment our ciders.

Unlike fussy old beer, cider will ferment under variable temperatures, and we’ve found that we get tastier results when our cider it is allowed to develop in an unheated out-building/shed where it can bubble merrily away, in harmony with the rise and fall of the fluctuating temperatures of autumn, winter and spring.
Just in case our plastic cider store gets too warm (which might aversely affect the cider), we have situated our cider store in a shady corner of the garden under a sprawling, bee friendly Cotoneaster-Horizontalis that in turn looks out over our raised strawberry bed/ giant cat litter tray.

The store was simple enough to put up, snapping and screwing together easily and induced very little ‘flat pack rage’ – no unexplainable ‘spare bits’, no angry hammering required. It was all done and dusted in less than thirty five minutes, twenty three seconds. (Not that I was timing it).
It comes equipped with a hydraulic lid, which should aid cider inspection throughout the fermentation process and has the added bonus of a lockable clasp on the front doors, should any rival cider makers come snooping round for our trade secrets.

If all goes to plan we should be enjoying the cidery, Keter–bourne delights early next summer… just as long as the badgers haven’t figured a way of breaking in. 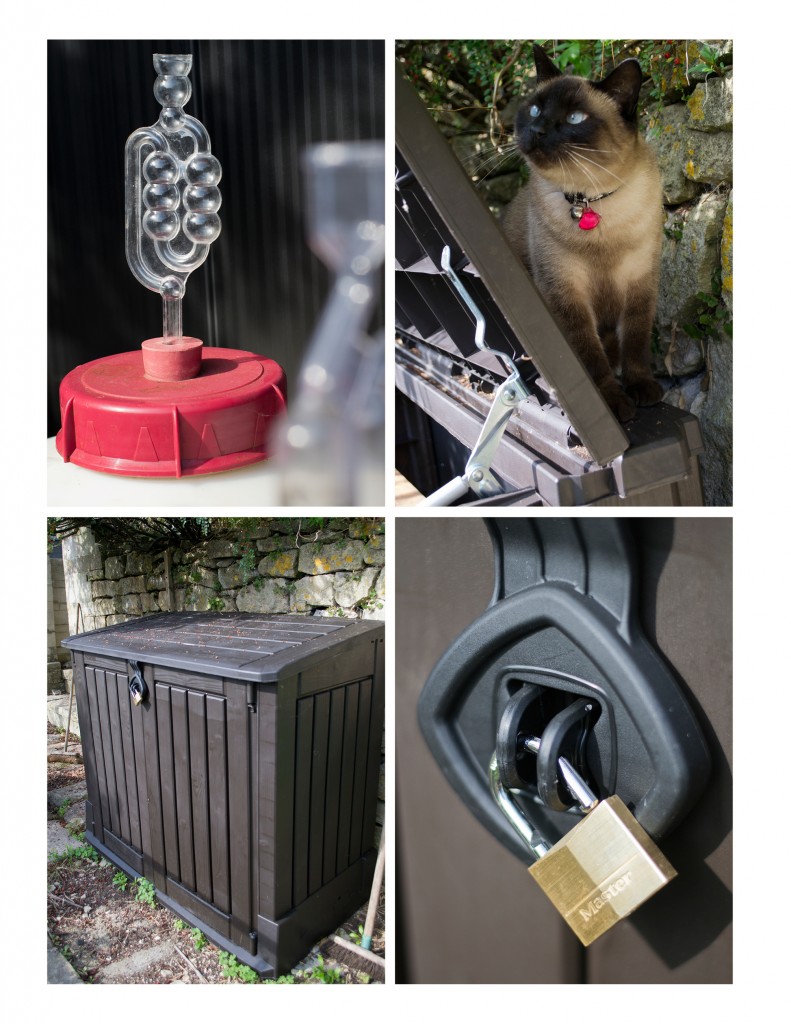 If you think one of these types of shed/box/cabinet things may solve your own storage woes, you can buy them online here. Alternatively, drive on down to your local Homebase store – we can confirm a ‘mini store-it-out’ will fit in the back of a Ford Focus with minimal swearing.

Note: Homebase contacted us to see if we would be interested in reviewing any of their products. We suggested the Keter and they provided it.