Elsewhere on this website we’ve extolled the virtues of horseradish, claiming it as a forgotten veg by chefs amidst a clamour for the more exotic wasabi. The horseradish’s reputation has stooped so low that it’s actually used to flavour wasabi snacks instead of the named veg, but isn’t even given the credit. We also point out how easy horseradish is to grow compared to the apparently difficult wasabi.

But recently we were contacted by The Wasabi Company who claim it’s easier to grow than we imagined and, to prove it, have started selling wasabi plants for UK gardeners. We got our hands on one last week and about to find out for ourselves.

The plant grows from a rhizome (the rooty bit that’s grated for wasabi paste) which apparently likes a cool, shady spot with access to plenty of water. We’ve got a murky corner of the garden in mind but, before being planted out, it will live in a pot on the windowsill until spring starts warming up.

A wasabi plant should reach a height of around 60cm and a width of a metre, sending out big, heart shaped green leaves and clusters of dainty white flowers – all of which can also be eaten. The plant needs two years to establish itself until the roots are ready to plunder, but as an early taste of what’s to come we’ve also got a couple of freshly harvested roots, grown by The Wasabi Company from their Dorset base, and a natty wasabi grater and brush.

It won’t stop us from promoting the virtues of the horseradish but, if successful, it will give us a wider choice of home grown hot stuff.

To get your hands on a wasabi plant visit www.thewasabicompany.co.uk 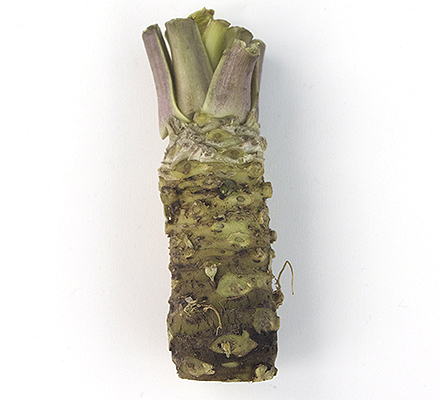 Note: as mentioned in the piece The Wasabi Company contacted us to ask if we wanted to feature their product and kindly sent the plant