New Zealand is a country with high horticultural standards. Not only do they effortlessly produce a delicious array of fruit and veg, but they also grow some of the most flavoursome hops in the world. So when we were asked to test out Gardenzest, a natural potion from New Zealand that claims to improve fruit yield and flavour, we said “sure, two return flights to Auckland please”. Not surprisingly, the only flight involved was a one way ticket for a bottle of Gardenzest.

Usha Amaranathan who, with her father, runs the business that makes the product told us a little more about its benefits: “Gardenzest is an elicitor – a compound that triggers the plant’s own system to react to improve its immune response. In the process of strengthening this immune system Gardenzest triggers a range of positive outcomes for us gardeners like increased brix (sweetness), flavonoids (flavour compounds), coumestrol (less damage) and a range of essential oils that are great for our health.”

Rich has always complained about trouble with his flavonoids so was keen for reassurance about any potential side effects. Usha was quick to reassure him. “Gardenzest is not a hormone so we avoid the negative side effects that often occur when tweaking finely balanced hormones. Gardenzest does not cause phytotoxicity, it’s safe to apply and safe to eat the fruit or veg after spraying.”

Happy in the knowledge that there will be no tweaking of his finely balanced hormones, Rich gave it the thumbs up and we agreed to unleash the elixir. Using it is a doddle. A cap full of murky brown goodness goes into a litre of water and is sprayed onto the plant’s leaves once a week.

To give it a full and thorough test we enlisted the help of a pair of jalapeno plants. These were grown from near identical seeds, in an identical environment, and have grown up looking like identical twins (albeit ones that are dressed slightly differently). One will be zested. The other will look on with envy.

To remind us which one receives the weekly treatment we gave it a cheery pink pot to match the bottle’s livery. Unless our jalapeno guinea pig has a natural aversion to pink we expect to see it producing healthier, happier (and hotter?) peppers in a few months time.

We will, of course, keep you posted… 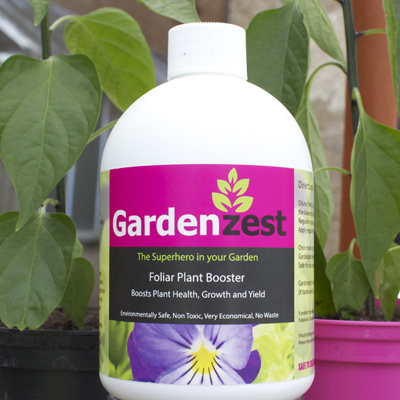 Note: as mentioned above, this product was sent to us as a trial. The chillis had no knowledge that it was sent to us for that purpose and their decision to grow was not influenced by the fact we didn’t have to buy the stuff.