First of all, apologies for the subject of this post, for it contains talk of neither swigging nor digging. It is, however, a heartwarming tale of both stupidity (on my part) and the kindness of others.

Around this time, two weeks ago, I was busy preparing and packing for our annual family excursion to St Ives, and decided it’d be a great idea to borrow the very expensive company GoPro camera* and take it on holiday to capture some Cornish seaside antics**.

And when I mean ‘take’, I mean ‘sneak out from the Thirsty Gardener safe deposit box without telling Nick’.

On arrival, and after purchasing a circulation–stopping wetsuit for myself, and two massive, baggy ones for the kids (they’ll soon grow into them, right?) it was time to hit the waves for a spot of bodyboarding. That’s if  ‘flopping around in the waves like a beached porpoise’ qualifies as bodyboarding, of course.

All was well. The sun was out, the surf was up, and the cheapo bodyboard I had purchased seemed to be holding my weight. But surfing funtimes were soon to come to an unscheduled, undignified halt.

After one overexuberant attempt at clambering onto said board, I managed to knock the GoPro off my chest harness, causing it to plunge lens first into the watery depths. On realising what had occurred*** and after emitting a curdling cry not dissimilar to a seagull choking on a plastic fork, I spent the next 20 minutes frantically wading through surf in search of the missing camera, my vision obscured by both crashing waves and salty tears.

My mind turned to thoughts on how best to explain its loss to Nick. (“Didn’t you have it last? Big boys came and took it away. What GoPro?” etc.)

Then, after much fruitless wading, a young lad approached.

We waded to the shore where the lad’s family were waiting. His dad pulled the camera from the depths of his pocket, and GoPro and idiot were reunited at last.

“You haven’t also lost some sunglasses, have you?” Said his mum. “He’s found a pair of those as well. He’s always stepping on things, he is”

Now here’s the best bit…
The camera recorded the whole episode: the joyous frolicking in the frothy surf, the descent of the camera down to Davy Jones’ locker, the 20 minutes it spent tossing around on the seabed, and its miraculous recovery thereafter. See the action-packed camera stills, below… 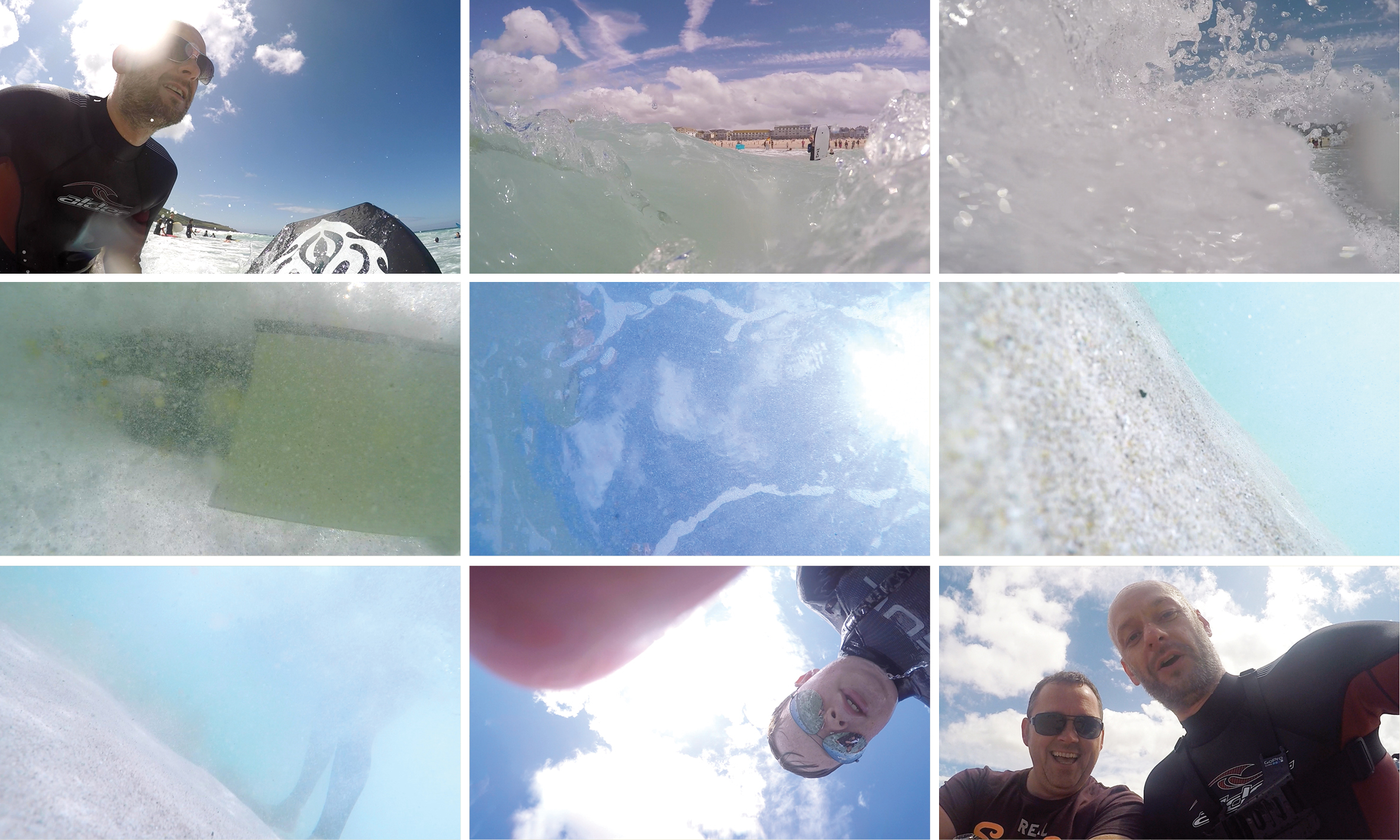 I managed to get the dad’s name – Dale – but not his surname. Mawker, I think. It was difficult to make out… my ears were full of sand. But if anyone recognises the family featured in the above pictures who visited St Ives on or around 23rd July, please get in touch through our website. I’d like to thank them again.

** Could’ve been a lot worse. One of my ideas was to strap it to a pasty, hold it aloft and record a savage seagull attack.

*** My eldest daughter suggested that we call out the lifeguards.