This year, not for the first time, I failed to properly label my pots of sown squash seeds and had no idea as to the identity of each variety by the time they were ready to plant out. So I randomly selected nine plants to grow on, waiting until they bore fruit before I could be sure of their names.

The final count ran to a single black beauty courgette; two yellow sunbeam courgettes; one pink banana squash; and five spaghetti squashes. I definitely sowed some Lebanese squashes (I actually thought the young pink bananas were Lebanese, which is more of a courgette, and ate them while soft, thus not enjoying a fully ripe banana). And I’ve got an open packet of butternut squash seeds but no evidence of them ever having been sown.

Overall, the final selection wasn’t bad for pot luck. It may look a little heavy on the spaghetti but fortunately they’re the family’s favourite.

Spaghetti squash gets it name because, when cooked and served, the soft yellow flesh resembles spaghetti pasta: thin ribbons of vegetable that sit in a shaggy mound demanding the close attention of a thick sauce.

Like all squash, they’re pretty easy to grow*. Keep the young seedlings warm, planting out when the frost risk has passed, and give them a good dose of compost to feed off. Of all my squash plants they looked the healthiest, grew the biggest, and were the last to succumb to leaf mildew – finally perishing some time after I’d harvested the goods.

To maximise size and quality it’s best to restrict each plant to just two fruit, but as their tendrils grow so long and fast (and my veg garden is a mess) it’s quite easy for a squash to emerge and steadily expand hidden from general view, so my five plants rewarded me with 13 oblong blobs in a range of sizes.

You can harvest and eat them when they look like they’ve finished swelling and their skin starts to deepen in colour, but give them a little longer to harden if you want to store them for a while.

How to cook spaghetti squash

To cook, simply slice them in half lengthways, scoop out the seeds (roast these separately – they’re good for you) and score the flesh with a knife. Rub a bit of oil into the cuts and bake in the oven until soft enough for a knife to slip right through them with ease (around 40 minutes at 180C as a guide). Then the magic begins. Grab a fork and ruffle the flesh with its prongs: spaghetti-esque strands instantly emerge in an appetising mound, ready for serving. Its mild, buttery flavour goes well with almost any pasta-style sauce and – I like to eat serve mine with spicy chorizo and tomato, but with 13  squash to get through I’ll have plenty of new serving options to try over the coming months.

*Except, perhaps, butternut squash. I’ll find out next year for sure. 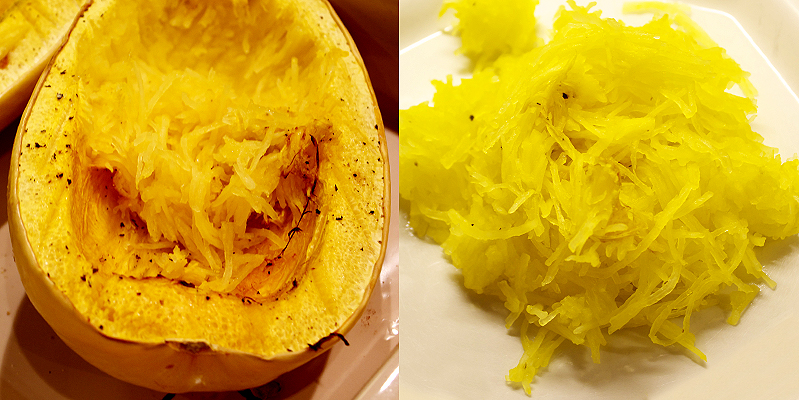 Is it a veg? Is it pasta? Freshly cooked spaghetti squash.