Those familiar with the inner workings of book publishing will know that publishers require* their authors to engage in a certain amount of promotional activities to help flog the book. This can be a demoralising affair which, more often than not, involves sitting lonely and tearful at a backstreet bookshop signing event, fronting up a queue of two, consisting of your mum and a confused pensioner who thinks they are in line for a free eye test.

Not for us. Seduced by tales of our silky cider-making skills, bigwigs at the Royal Horticultural Society got in touch with our publishers, wishing to invite us down for a two-day apple bashing frenzy at their London Harvest Festival Show. A show where we could also sell copies of BIY, thereby appeasing our book bosses. Naturally, we said yes, and immediately started polishing our finest apples in preparation.

Having tumbled out of our airing cupboard-sized hotel rooms on the morning of ’show day’ we pitched up at RHS HQ. Armed with sacks full of (shiny) apples, a scratting stick and Alan, our faithful cider press, we set up stall in the ‘naughty corner’, adjacent to the table of enormous carrots, just to the left of the bulbous beets. (But tellingly, just far enough away from the prize apple display for it not to become a ‘conflict of interests’).

As you would imagine, the RHS Harvest Festival is all about the show veg. Described by many as the ‘Crufts of vegetables’, all veg were here; turnips, chillis, radishes, the lot. Pride of place, however, were the giant pumpkins. They had arrived pre-show, winched into place from groaning flat bed trucks. The winner** was so grotesquely huge that the editor of a well known, posh gardening magazine commented on its striking resemblance to that of ‘Bubbles Devere‘, Matt Lucas’ generously fleshed comedy creation from Little Britain.

Our first frantic show day was, er, frantic. Apples were pressed at a rate of knots, whilst fielding cider-y questions from an endless stream of inquisitive visitors (and then pointing them towards the bookstall). A 6pm ’til 9pm evening shift saw the Lindley Halls echo to the sound of live fiddly folk music and tinkling glasses – the Midnight Apothecary pop-up bar popped up and started cranking out posh drinks for the evening crowd, including a special ‘Thirsty Gardener cocktail’, using some of our freshly pressed apple juice. (The cider making demo got a bit more chaotic after a few glasses of these).

Day two proved to be even busier – someone at the RHS had the bright idea of letting groups of schoolkids*** through the doors, so our cidermaking demo was quickly rebranded as ‘apple juice making’, swearing was curtailed and full concentration was needed to prevent inquisitive fingers getting mangled within Alan’s gaping maw.****

At 4pm, our work was done. All apples (and a few crates that the guys from Wisley kindly passed over) were juiced, we’d sold out of books, appeared on London Live TV, and somehow managed to get an invite to do a booze demo at next years Hampton Court Flower Show.*****

After liberating a giant carrot from the leftover show veg, we loaded up the thirsty wagon and attempted to find the M5. Unaccustomed in the ways of inner-city, rush hour motoring, Nick used the method of straddling a couple of lanes at once, just so we didn’t miss a turn. And judging by the honks of delight emitted from the numerous black cabs en route, it was evident that London cabbies whole heartedly approved of his technique.

Curiously, on arrived back home with our pressed apple juice, it had already started to ferment. We usually wait at least a week before the wild yeasts kick in. We’re not sure what the orchard managers at Wisley have been feeding their trees, but we’re certainly looking forward to sampling our super-charged RHS cider next Spring. Cheers! 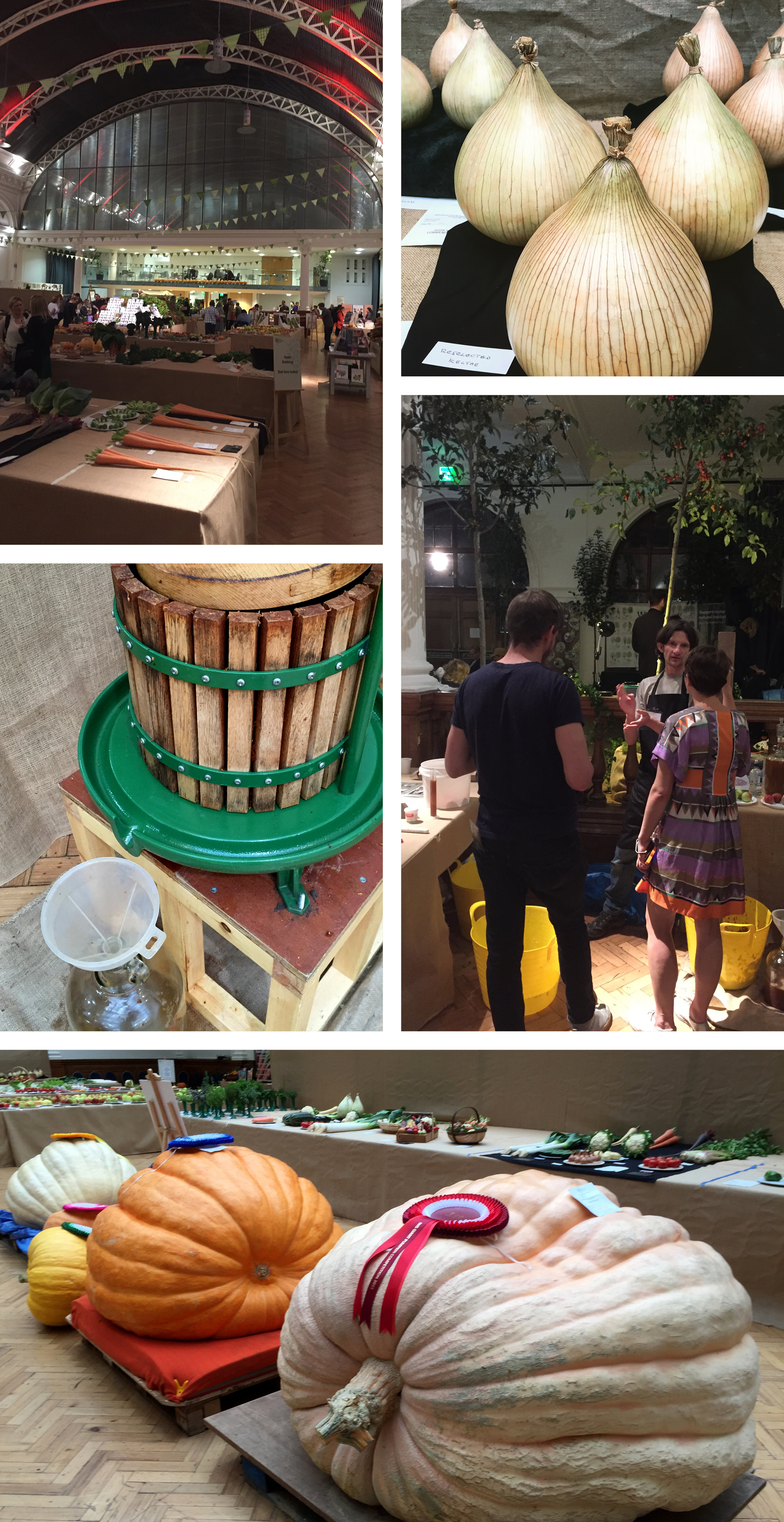 * Usually written in 5 pt type at the back of the contract.

** It weighed in at 509kg. That’s the same weight as two shetland ponies. Or a medium horse. Or a malnourished cow.

*** Smashing kids. Really keen to get involved and learn about the process. So keen in fact, one year five lad snuck off from his school party and tried to buy a bottle of cider from us.

**** We are fully insured against accidents. Just worried about the cider being contaminated with haemoglobin.

***** This depends on whether they can scrub the apple juice stains out of the wooden parquet floor.

Lindley Hall Hot Tip!
Just round the corner from the hall is one of the finest cafes in London. Nick had bubble and squeak with his fry-up on the second morning – his post breakfast gut was so bloated, people thought he was part of the pumpkin display.