We’re only eight days into Tryanuary, and I’ve already had a belting beer that’s going to take some beating.

It’s a corker from Beavertown Brewery, the much lauded ’British Guild of Beer Writers Brewer of the Year’ and a brand I’m familiar with – not least due to their shiny, spot varnished cans that have often seduced my magpie-eyes from atop the offy shelves, resplendently adorned with the illustrations of in-house artist, Nick Dwyer.

Heavy water is an Imperial stout with a sour cherry adjunct. Now I’ve had plenty of beers that have boasted exotic adjuncts with promise of a booze that will dance an ambrosial tango on the tongue – only to be let down by heavy-handed hopping or mountainous malt additions.

Not in this case.

It’s a perfect example of a ‘Ronseal beer’. Not in the sense that it’s brown, viscous and sticky (even though it is) I mean something that delivers EXACTLY what it says on the tin. Right from the very first glug, sour cherries surf over your tongue atop a slick black wave of silky stout, carried in by a salty sea breeze that lingers on the palate before giving way to a long, smooth malty finish.

And despite the eye-opening 8% ABV*, Heavy Water manages to hide the alcohol expertly. Like Oz Clarke in the ‘nothing to declare’ isle. It’s quite possibly the most session-able 8%-er I’ve ever had the fortune to sup. (falls off chair).

Admittedly, I may be rendered giddy and emotional by the dark, swirling liquid in my glass (I’m weeping as I type this), and there’s certainly a LOT of beer yet to flow under the bridge, but could I already have supped my favourite beer of 2016? 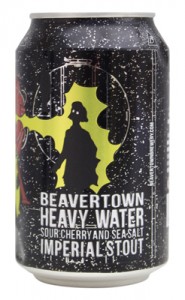 * Relatively restrained for an Imperial stout, which usually range between 7-12% abv. Favoured by the Tzars (Peter the Great was a huge fan), Imperial stouts were originally brewed in Burton, shipped to Russia and traded for (amongst other things) St Petersburg oak to make beer barrels for… Imperial Stout.