There was a time when Fuller’s London Pride was my favourite beer in all the land. Unlike many other English beers in general circulation during the early 90s it had a decent flavour, was served at a consistently high standard and you didn’t have to hold your nose to drink it.

Tedious work trips to London were made worthwhile with the promise of a pint of Pride and, on occasions, it would even make the journey across the M4 to one of my local West Country haunts as a most welcome guest ale.

Back then, the London brewing scene didn’t offer much choice for real ale seekers and Pride was, indeed, the city’s proudest brew. These days the place is in the midst of a craft ale furore and Fuller’s is now the oldest and biggest fish in a very overcrowded pond. To move with the times the brewery has been steadily updating its range, attempting to maintain its popularity in the midst of the craft epidemic and, for the most part, those additions have been a success.

One of these new brews that I had always shied away from ordering is Frontier. The reason for my reticence was the word ‘lager’ tacked beneath the slab serif logo. Despite knowing better, an old prejudice still surfaces in me that suggests any lager served in a traditional British pub is to be avoided, especially when it shares the bar with a London Pride pump.

However, we recently met up with a chap from Fuller’s brewery to chat through some of the innovations they’ve been making, and he explained a little more about Frontier lager that made me toss away my previously held assumptions. For starters, it’s made with Fuller’s own yeast. A marvellous microorganism that has been carefully cultivated over the years, doing the important task of converting sugar to alcohol and imparting its own unique flavour profile into their beer output.

This also means it’s a top fermenting yeast (lager tends to use bottom fermenting yeasts) which makes it a much more suitable style for a big English brewer like Fuller’s. The rest of the ingredients – grain and hops – mix the traditional with the modern and include a sprinkling of new world magic, creating a drink that should appeal to younger craft ale drinkers and old timers alike. As you would hope from a lager it has been slowly brewed, going through a five week lagering stage before it finally sloshes into consumers glasses. And to keep in vogue with drinking fashion they’ve even started storing their beers in cans, developing their own canning techniques to allow those traditional yeast-made flavours to maintain their freshness after packing.*

After that education I ordered a pint at the next opportunity (the Fuller’s bar in Paddington Station), supplanting intrepidation with hopeful expectation, and took a glug to clear away a head-full of London grime. New expectations were met: light and refreshing in the best lager traditions; swirling with invigorating hop flavours; but with a soft, English maltiness that gives it a degree of instant familiarity.

Since then I’ve also got myself a few cans of the stuff, and it makes the transition to metal perfectly well. I’ll still be in the market for nostalgic pints of London Pride whenever I’m in the Big City, but I’ll no longer be turning a blind eye to Frontier.

*Some of these innovations include in-can-conditioning, although at the moment Frontier hasn’t been given that treatment 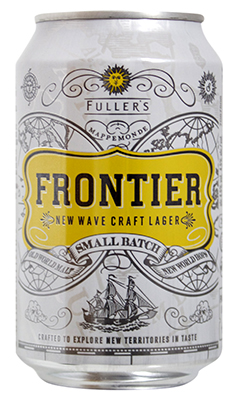