My petrol garden strimmer is currently out of action, lying motionless in the shed having been worked like a dog for the last 12 months. Its carburettor needs a good clean, garden detritus clogs every crevice and the plant guard has cracked and flops open like a gaping mouth. As luck would have it, Flymo recently got in touch, offering up one of their entry level trimmer/edgers to have a go on. I was slightly reticent, not wishing to upset my faithful grass-munching pal, but realised that a nice, quiet, battery operated trimmer probably wouldn’t rouse it from its slumber, I decided to take them up on their offer.

Now my garden is not the largest – a hamster driving one of those exercise balls could probably traverse it in three or four rotations – but it does have a good mixture of hard and soft borders and an undulating, mixed-media* grassy surface which is just the ticket for testing products such as this. I also took it down the allotment to see how it coped when presented with serious, heavy-duty foliage.

Ease of assembly
Shamefully, I struggled slightly when assembling the trimmer prior to use. It should be a simple case of pairing the shaft assembly together, but for some reason the wire innards refused to make room for the two parts to meet. A bit of semi-aggressive waggling combined with a smattering of light/medium swears did the trick. The clip on wheel was easy enough to attach, likewise the plant guard. From box to lawn, it took me 10 minutes. Five minutes for someone more adept, I’d say.

Design
Smooth and sleek, the Contour Cordless looks resplendent in a fiery Flymo orange. If HR Giger designed toys for Fisher Price, they’d look something like this. It’s also solidly built, with no flimsy parts on show. I clonked it on the side of my shed a few times, just to make sure. Nothing fell off or snapped.

Performance
It tips the scales at 2.3kg, which means the unit feels light enough in to wield comfortably yet not feeling too weak and puny. The 18v rechargeable battery pack that you wedge into the handle acts as a counterbalance, but the unit is weighted in favour of the cutting head, making it unbalanced for one handed-trimming whilst having a fag. Best use it as Flymo intended – one hand on the trigger handle, one hand grasping the pommel to steady the ship.

In use, there’s no option to lock the trigger in place. It’s a sensible safety feature for sure, but the continuous pressure needed to keep it firing does mean your trigger hand will fatigue after a short while.** It would have been nice to be able to stand the unit unaided during trimming breaks – you can if you remove the battery – but with it installed, the trimmer will keel over.

In ‘trimming mode’, the Contour Cordless coped admirably with the tatty grass/moss combo on my lawn. It also held it’s own tackling my allotment’s wavy thickets of couch grass and with a bit of encouragement, had a good chew on the enormous nettle patch that is threatening to engulf the shed. However, it fared less favourably when aimed at the bramble bushes. In fact the brambles laughed in its face as the strimmer meekly tickled its tough tendrils. To be fair though, this is petrol-powered brushcutter territory and not what the Contour is built for. It was worth a try.

Where the Contour does excel is for edging borders, and it’s probably the function most users will be buying it for. Press the button on the side of the shaft and the trimmer swings on a ball joint, clicking into a vertical position, ready, pumped and primed for edging duties.

Now having made a bit of a botched mess of the first border I tackled, I was slightly underwhelmed with the results. The second attempt was much more successful, having gone back to the instruction leaflet and read it properly. Using the wheel to guide the trimmer whilst keeping an eye on the white cutting indicators produces great results – neat, crisp grassy edges in minutes.

Verdict
The Flymo Contour Cordless XT is a handy tool to keep in the shed, great for light trimming duties and for tackling narrow overgrown pathways where an electric mower might struggle. Being cordless, it’s also handy for carting down the allotment to indulge in a spot of grassy TLC. It will struggle on bigger brush-cutting duties, but take it for a spin around a shaggy border and you’ll be rewarded with neat, professional-looking lines. 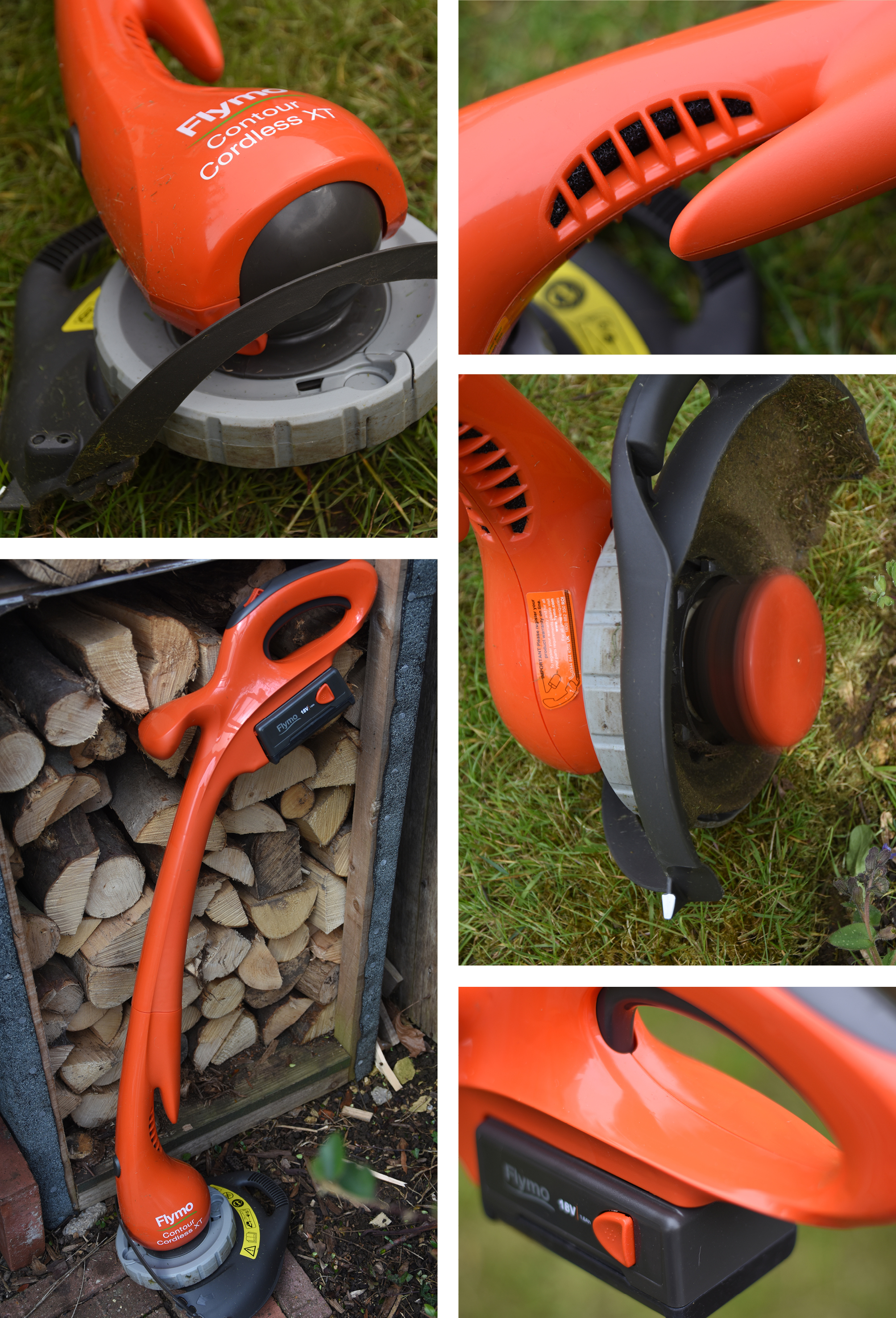 **Unless of course, this is your thing…
https://www.youtube.com/watch?v=lzcVvTHZlQo