Rejoice! One of my favourite BrewDog beers has been elevated to mainstream status and joins the brewery’s more established boozes at supermarket Morrisons. The beer goes by the name of Elvis Juice and is an IPA infused with real grapefruit – very gluggable and jammed full of juicy fruit and bitter hop flavours, right from initial slurp to post-glug burp.

There are several American hops that are notable for striking up a fruit grapefruit-esque notes, so by using actual grapefruits in the mix BrewDog have naturally enhanced the experience to create a beery symphony of citrus flavours. There are other tropical chords chiming in the background but, for me, I’m much more interested in its star ingredient.

As to why the beer has been named Elvis Juice, it’s all a bit cryptic. There’s a big explanation on the bottle, written in typically excitable BrewDog hyperbole, but I prefer to think it refers to the IPAs fruity leader being the king of the juices: no other can match the sweet, sharp and sour fruity face-smash provided by a glass cold grapefruit juice* for breakfast. And I don’t mean the trendier pink stuff that is steadily elbowing the original golden champion out of the chiller aisle. That’s grapefruit for wimps.

So certain was I of grapefruit’s place at the top of the juice charts that I surveyed our twitter followers to see if they agreed with me. Disappointingly, only 10% did (and I suspect some of those choose to drink the pink). Unsurprisingly for a following that includes a lot of grow-your-owners, apple pipped the nation’s favourite orange to the top spot, with pineapple even knocking grapefruit into a dismal fourth place.

But perhaps a few of them will trundle down to their nearest Morrisons to try out a bottle of Elvis Juice and reawaken their senses to the wonder of grapefruit. They won’t be disappointed. 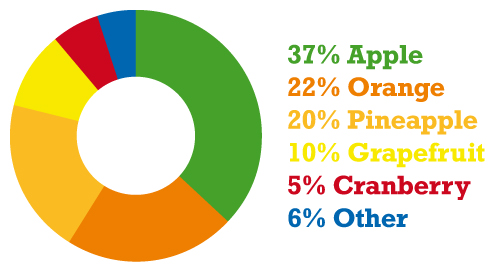 *Apart from fresh lemon juice, but it’s not so easy to find cartons of that in UK supermarkets

For virtual basket fillers, here’s your link to Elvis Juice online (£1.65 at Morrisons). Thanks to Amy from Morrisons’ press team (favourite juice: orange and cranberry) for alerting me to the news – Elvis Juice is one of 26 new boozes in their 40-strong craft beer range – and for sending me a bottle which I’m saving for later…