Beer writer Tim Hampson’s new book ‘The 50 Greatest Beers of the World’ has become our new booze bible as we leaf through its pages, finding the beers we’ve not tried before and learning more about the stories behind them. We were lucky enough to catch up with Tim and find out more about how he tackled the task, and get some more thoughts on one of our favourite entries – the Belgian farmhouse classic Saison Dupont…

Coming up with the Worlds 50 Greatest Beers sounds like a daunting task. How did you set about the challenge?
It wasn’t easy to choose 50 beers. I spent a lot of time thinking about how to do it. One solution would have been to include my 50 favourite ales or even my favourite lagers. But that would have resulted in a narrow focussed book.

I wanted the book to have some narrative to it, so in the end I decided that I would try and include many different beer styles. I wanted to show the incredible diversity of the beer world and celebrate the creation of so many different drinks from just four ingredients – usually malted barley, hops, water and yeast

The beer market has changed dramatically in recent years. How different do you think this list would’ve looked at the end of the 20th century? And how might it change in ten years time?
The changes to the beer world in the last 20 years have been dramatic. There are now so many new exciting breweries not just in the traditional brewing countries such as the USA, UK, Germany and Belgium but we are seeing the blossoming of brewing in non- traditional brewing countries such as Japan, Italy, Brazil and Russia.

In 10 years time I expect we will see the have seen more and more small local breweries opening. But, I also expect to see a consolidation of many of the breweries we have now. That is how capitalism seems to work.

Have your own tastes changed since you first started drinking?
I am sure my tastes have changed since I started drinking. But the real change that has taken place is the availability of beer from hundreds of brewers from all over the world in a multiplicity of styles. When I was young I only knew of a limited number British brewed beers. I knew nothing of great Czech pilsners, German helles or Trappist brews from Belgium.

Saison is one style that has really caught the imagination of contemporary brewers. Why do you think it has become so popular?
I think saisons have caught the imagination of many brewers today because it is a style which allows them to show their creativity. There is no definitive definition of what a saison is. Traditionally each brewer would make their own variant of it.

But the variation is the beguiling attraction of the style – originally the beers would have varied from beers low in alcohol which children could safely drink to some very strong ones. These were the health and energy drinks of the day. Today, I think brewers see the style as a blank canvas, which they can use to express their creativity and experiment with and showcase unusual ingredients such as lemon grass, galanjal, ginger or even kaffir lime leaves.

One of our favourites, the more traditional Saison Dupont, features in your top 50. What makes this beer so special?
It just tastes so good. Dupont is regarded as producing the definitive and probably best example of the style. Unfiltered in the bottle, the beer is a hazy yellow and beautifully balanced. drinkers shouldn’t be concerned if there is some sediment either in the bottle or poured into the glass. This is a living beer which is bottled with yeast, sur lees. The beer is hopped with Kentish Goldings – which give a faint but gentle hint of orange fruit and a touch of spice. The finish is long and dry, leaving the drinker ready for another sip.

Do you recall the first time you tasted it?
I wish I remember the first time I drank the beer. I’d like to say it was while sitting in a bar in Belgium with the late great beer writer Michael Jackson. But it wasn’t.

What’s the best way to serve a bottle of Saison Dupont and what food would you eat with it?
I prefer this beer to be served at about 10C in a favourite glass.

But what to eat with it? Hunks of good cheese and slices of salami would do me fine, together with some an artisanal loaf. And the company of friends with whom I could share conversation.

And finally, is there one more beer you wish you could’ve squeezed in. The 51st greatest beer in the world?
A 51st beer? That’s a tough question. I think, I would have to make it the first I plan to have today at my local pub. I don’t know what it is yet, but I’m already looking forward to the first sip. The anticipation will make it one of the best in the world. 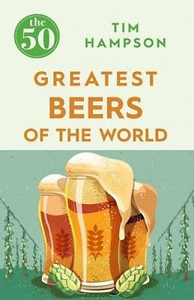 Available from Beers of Europe