This week, Nick has abandoned his BOTW duties, choosing instead to head holiday-wards to the sunny climes of North-West Wales. So while he’s busying himself on the beaches of Pembrokeshire, shouting apologies to parents as his pair of demented greyhounds skittle over small children, I’ve been left to forage for a potential beer to write about.

Last time he went away, I was granted the keys to his Booze Bunker to plunder the shelves for suitable candidates. Not this time – the keys were held tight between his miserly fists, citing my over-enthusiastic gathering of his prized boozes as a reason for denied access.

Nothing was looking particularly inspiring in my own impoverished booze cupboard, but just as I was about to sneak in a cider and hope he didn’t notice, help arrived from a rather unexpected source. Through the post came two new boozes – an IPA and a porter – courtesy of a canned collaboration between Island Records, Two Tribes Brewing and Soundwaves Brewing Ltd.

Thanks to the postman confusing the ‘fragile’ sticker on the package for a ‘kick-me’ sticker, both cans arrived in a rather battered state. Dinks and dents aside though, they are beautiful looking objects, both resplendent in a graduated circle/square motif with a judicious matt varnished finish. The best design flourish, however, can found on the back of the can. These beers are ‘Shazamable’, meaning they wear a small printed icon that – when scanned by your smartphone – will open up Spotify on your device and take you to a choice of three bespoke Island Records playlists.

The Session IPA is good, but the Jamaica Porter is even better, so I tasted this booze over the space of four tracks, randomly shuffled from the first ridiculously good Island Records playlist, which features corkers from the likes of Tricky, Roxy Music, The Slits and Toots & The Maytals.

If I’m honest, I’d liked to have taken a bit longer savouring the beer and listening to more tunes, but any minute, Nick is going to log into the website (providing the Internet has reached North Wales ) and will see that BOTW is over three days late.

Wafts of Bounty Bar greet my snout. There’s spiced coffee in there too, and I’m detecting a slightly fruity, date-like twang. ‘River Man’ is caressing my ears. Punting. I’m punting down a slow-flowing river, accompanied by swallows.

The coconut adjunct makes this porter silky smooth and creamy. It’s slipping down a treat. I’m now detecting a slight hint of rum. I’ve never been a massive fan of spirit additions to beer. I like rum, I like beer. But I don’t usually like rum interfering with my beer, or indeed visa-versa. This is nice though. It has a spiced rum addition, but it’s really subtle. Imagine a hummingbird – drunk on Malibu – settling on the rim of your glass, burping civilised reggae tunes up your nostrils. It’s a bit like that.

It’s a rich booze, but not overtly so, and one that hides it’s strength well. It’s like a lovely coconut, booze-infused milkshake. A beer worthy of the Island Records crest. Is PJ better than Bush (Kate, not George W)? She might be… 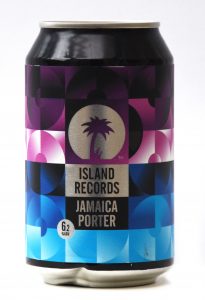