Beer, like most things, follows a fashion. And in this new age of ‘craft’ brewing, one trend that is constantly being talked about is ‘fresh’ beer: ales rammed with hops that are designed to be consumed before the aromas begin to fade. Yet, in most instances, the hops used in the brewing process will be far from fresh: they’ll be dried, sold to the brewery vacuum packed or compounded into pellets.

To really get the freshest possible brew you’ll need to seek out a much rarer product – green hopped beers. These are beers that use hops picked straight from the vine before being tipped into the beery wort before they begin to deteriorate. It’s a process that can obviously only happen at harvest time – a date that can’t be accurately predicted in advance – with the brewer needing immediate access to the hops, making it a much more challenging prospect. And besides this physical challenge, green hops are also harder to work with: it’s a messier process and the hops can provide less predictable results in the finished beer, with any changes in soil condition or climate making a more noticeable difference to the flavouring and bittering properties of the hop compared to its dried equivalents.

One brewery to have hop access within spitting distance of the brewing kettles is De Plukker, situated on the organic hop farm of co-owner Joris Cambie in the town of Poperinge, Belgium’s undisputed hop capital.

Being so close to the hops he has grown and harvested all his life, Joris has a natural respect for the plants and a desire to promote them at their best within the brewery’s beers. Among their range is a single green hopped beer, brewed every year on a pre-determined day during the September harvest, with the hop variety chosen according to what is ready to pick.

On our visit Joris shared with us his 2016 green hop edition, a 5.5% amber beer limited to a run of under 2,000 bottles, which showcases the variety Phoenix. Our bottle was around five months old and already a slight degradation of the hop aroma was apparent,* but the overall quality was high and the characteristics of Phoenix, a British hop, appeared fresh among the flavours. A florally focussed variety it has a tangy British bitterness which is scattered with gentle spruce and spice notes. In Joris’s beer those fresh whole cones also offered distinctive grassy and herby ‘green’ flavours that are more likely to be lost when the hops are dried.

The overall impression of the beer is of an easy-going Belgian ale, along traditional lines, with the hops allowed to gently work their magic rather than hit hard like many modern hop show-off brews. It’s very much a fresh beer, crafted with care and respect for the ingredients that go into making it.

Main picture and left: the hops were just beginning to reveal themselves during our visit to the De Plukker brewery and hop farm
Right: Joris and some of De Plukkers; beers, including the 2016 Green Hop limited eiditon

With green hopped beers providing a challenge for both brewing logistics and beer consistency, they’re not the kind of drink bigger breweries tend to go for. So it was a bit of a surprise that our next green hopped beer was produced by a much larger outfit – the Czech Republic’s Budweiser Budvar.

We met Josh Nesfield from the brewery’s UK headquarters in a pub in Bristol, where explained that the idea for the beer came not from his marketing colleagues, but from workers at the brewery. As with Joris at De Plukker, the brewery takes great pride in its hops, the Saaz variety, which are celebrated in the local town’s annual hop festival, ‘Dočesná in Žatec’, the biggest such event in the world.

To show the effects on flavour of green hops, Josh – a man with no fear of the office hangover – lined up the 2017 fresh hop release, an imperial lager, alongside three other beers from the Budvar taps. “Each beer uses the same ingredients” he pointed out “but they all taste completely different.” The initial thing we noticed about the imperial lager was its strength, 7.5% compared to the 5% of the brewery’s most well known lager. But after adjusting to the added booziness, those fresh hop flavours started to come to the fore: the Saaz spiciness is prominent but has more noticeable floral and grassy notes than we were used to, and a more obvious hoppy aroma that aided the fresh experience. We’ve always enjoyed a glass of Budvar, but reckoned this to be the best of their beers – although after four swiftly consumed pints our judgement may not have been all that sound.

Due to its 200 day lagering process, Budweiser Budvar’s green hopped lager is at its fresh best considerably later than De Plukker’s beer, but it still has a limited run and is only available for a few months from April each year. It’s well worth seeking out when that time comes around again.

Producing these beers can be a challenge, but with breweries keen to explore new flavours by turning to a huge range of unusual brewing adjuncts, perhaps there’s one obvious ingredient that is worthy of more consideration: the fresh, green hop. 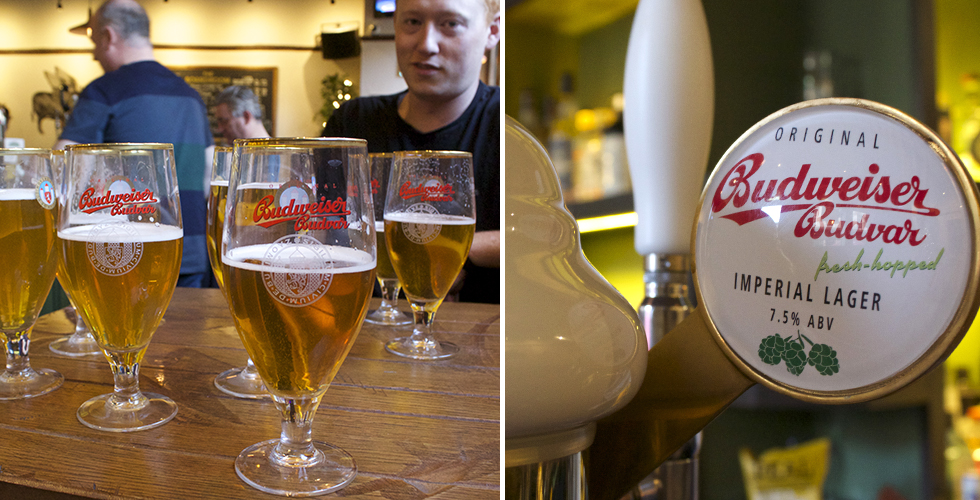 *Beers that start to lose their hoppy freshness are often described as having a ‘wet dog’ aroma. That would be cruel to De Plukkers feint loss of quality. Let’s call it ‘damp kitten’ instead.

Thanks to Paul Walsh of Belgian Beer and Food magazine and the tourist boards of Flanders and Poperinge for arranging the visit to De Plukker.

To find out more about Budweisers green hopped beer check out the feature and video on their excellent Czech Stories website.