Having recently attended Bristol’s harbour-side Craft Beer Festival with its incredible array of tasty boozes, we were dismayed to find a severe lack of quality ciders on offer. Admittedly it was – after all – a craft beer fest so this kind of over-sight was not entirely unexpected, but it did make us sad and ponder how underserved (literally) cider is at these such events. We wandered over to the banks of the Avon (with amazing craft beers in hand) and looked longingly across to the opposite shore where the Bristol Cider shop lies, and dreamt of the juicy treats within. The sadness didn’t last – maybe a couple of minutes tops – and we were soon assaulting (not literally) the bar in a quest for more tasty beer. It did however spark our apple-y appetite to reacquaint ourselves with some nice ciders, and the following day we pledged to do so – as soon as our crushing, hoppy hangovers had receded sufficiently.

As luck would have it, a brace of ciders arrived in the post the following week. The bottles hailed from Crafty Nectar – cider box distributors, apple aficionados and recent sponsors of standing stone blasphemy – who have been busy putting their considerable cider knowledge into good use and producing their own special range of ciders.

Packaging-wise, Crafty Nectar have shunned the traditional farm-house style often spied on cider packaging (tractors, horses, hoary old farmers etc.) and gone for modern, jazzy labels in the craft beer style. Closer inspection of No. 7 revealed the background pattern to be made of rhinoceros* shapes, whilst naughty No. 8 appears to be clad in a coat of drooping breasts**. Pondering the significance of this incongruous imagery, the cap was popped on the rhinoceros cider and contents poured into a willing glass.

Initial sips revealed a clean tasting, lightly carbonated cider with a lemon sherbet nose. It’s quite fruity, with traces of pineapple. Yarlington Mill and Dabinett are the apples name checked on the bottle. There’s a slight bitterness from the Dabinett but we didn’t get too much of a hit from the Yarlies which, in our experience, can be quite dominant. Rhinoceros cider No.7 is a good ‘un – not too ‘farmhouse’ so to scare off first time worshipers at the chapel of apple, but still packing plenty of flavour to keep cider aficionados interested.

Next up, droopy breast No.8 which, controversially, contains rhubarb. Now mention to a traditional cider-maker that you’ve made a cider and blended it with something other than apples and there’s a good chance you’ll be on the end of a sound thrashing from a panking pole.***  Adding alien ingredients is considered a crime against the apple amongst many members of the cider-making community. And thanks to certain sickly sweet abominations that lurk on the supermarket shelves, it often is.****

No.8,  however, is how it should be done. It’s cloudier than No.7, and comes in an amber bottle – presumably to help retain its pleasantly pink hue. On first sip, you get a tart taste of rhubarb, which builds the more you glug. A heavy handed cider maker could easily have tip the scales in favour of the rhubarb, but this blend harmonises beautifully and gives the cider an extra acidic twang. It’s a lovely balanced, refreshing cider – our only gripe being that the craft-friendly 330ml bottle left us wanting more. Great work, Crafty! We’re looking forward to  your next apple-y offering. ***** 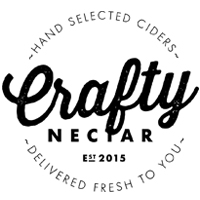 *** A large pole used to dislodge apples from apple trees.

***** And especially looking forward to being invited to the next Stonehenge disco event.*****