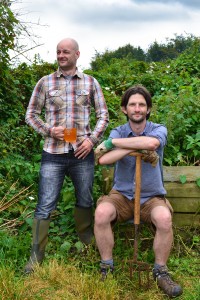 Rich and Nick began making their own cider in 2008, pilfering apples from anyone with a tree and brewing them in Rich’s garden shed. Four years later they acquired a neglected, overgrown allotment plot strewn with litter and without a patch of bare earth in sight. The first thing to get planted was an apple tree…

This website chronicles their battles with voracious slugs, destructive weeds and unexplained yeast infections as they attempt to produce a fresh vegetable harvest and turn some of the fruits of their labour into alcohol.

Meet Rich
Rich was raised in the middle bit between the North and the South, surrounded by factories, houses and the occasional grass verge. One of his earliest memories was stirring his Gran’s elderflower wine with a large wooden spoon.

Soon after heading South-Westwards to follow his dream in desktop publishing, Rich met Nick and was introduced to the quaint, vegetable-growing ways that define the region.

That wooden spoon, which was to became a reoccurring theme in his life, has long since gone, but the desire to ferment and brew still burns as strong as ever.

He lives with his wife and two children in Bath. He is currently 47 .

Meet Nick
Nick was brought up in a small village in Gloucestershire, where the main currency was cider and the only way to earn it was by picking spuds. His green-fingered parents grew a large part of his diet in their garden and brewed many weird and wonderful alcoholic concoctions in the garage.

Now in his 40s, Nick lives in Frome with his wife and dog where he runs his own design business. After years of sitting in front of a computer fighting with spreadsheets he is desperate to rekindle the outdoor existence of his youth and see if green fingers are in his genes.