Supermarkets are the new ‘big brother’. They know what you’re thinking. Loyalty cards, barcodes and secret agents masquerading as spotty young checkout operators are just three of their weapons in the battle over your mind. So it’s no surprise that Sainsbury’s know I like beer, which would account for an out-of-the-blue email inviting me to take part in a tasting event to find the next beers that will grace their drinks shelves.

It’s easy to rail against the big supermarkets for crimes against food retail, but my nearest outlets all supply a good range of beers, with plenty of them coming from local independent breweries. So while some aisles for me are out of bounds, my basket is often weighed down with clinking bottles of West Country booze.

“Sainsbury’s 2013 Great British Beer Hunt” is a clever exercise in marketing and PR , but one that should benefit beer drinkers. Hundreds of consumers have been invited to four regional tastings – London, Leeds, Glasgow and my location, Bristol – to vote for their favourite beers and therefore contribute towards Sainsburys selection process.

On arrival participants are handed a list of 40 beers, each with a brief description as it would appear on the shelves, and ushered to a table where bottles of the beers are displayed. Before any drinks are poured we have to pick eight beers we would like to try, thus allowing personal selection criteria to help the organisers determine which products might be the most appealing. Some people go by description, some by the name and packaging and others choose beers they’re already familiar with and would like to see given their big break. My main criticism of supermarket ranges has been a lack of dark beers, so my eight choices are mostly hued from deep red to black. A light beer called ‘Fistral’ is my one deviation on account of it being named after a place with family connections.

With our selections made we move through to another table where we’re given a tray of eight small glasses filled with our beers and tasting can begin. We’re told to pick our top five from our short list, and number them in order of preference. At the end of the session scores will be aggregated with the winning beer going straight to the shelves within two weeks and the remaining top dogs battling for selection at a final tasting in London.

I carefully sup my beers, continually cleansing the palette with water, and diligently writing notes. All eight beers are genuinely enjoyable and it seems a shame to reject any of them – so while my top three are easy to determine I put in a bit more drinking effort to carefully determine the minor places. This time I gulp the remaining beer, which gives a much better hit of flavour than the delicate sipping, and my selection is complete.

With voting forms handed in we’re then invited through to another room where representatives of the breweries are handing out more free samples, giving us a great opportunity to try some of the drinks we missed out on during the tasting and learn a little bit more about the breweries we’ve voted for. It has been a great experience and another reminder of the depth, quality and innovation of British breweries… and hopefully when the winners are announced we’ll see at least one new dark beer on the supermarket shelves.

What the tasters say…

Marcel, Switzerland
Selection criteria: Marcel, a last minute replacement for a hungover pal, carefully studied the descriptions before making his choice but admits with his eventual winner “it might have been the name that made me choose”.
Favourite beer: Captain Cat – S.A.Brain (4.2%)
“Very refreshing, went down very well. Would be good served cold”

Connie and Barry, Chippenham
Selection criteria: Barry initially “went for the label” when picking his shortlist. They do most of their beer drinking on their many travels to the coast so tried to imagine “what would fit in well at a seaside resort”.
Favourite beers – Barry: Captain Cat – S.A.Brain (4.2%)
Connie: Gower Power – Gower Brewery (5.5%)
“A really refreshing light beer, perfect for a summers day”

My tasting notes (in order of serving)

Porter No 6 – Harbour Brewing Co (6.8%)
Style: A proper London style porter
Notes: Ballsy flavours of roasted goodness powering through the senses, but not too heavy. Top of my list. 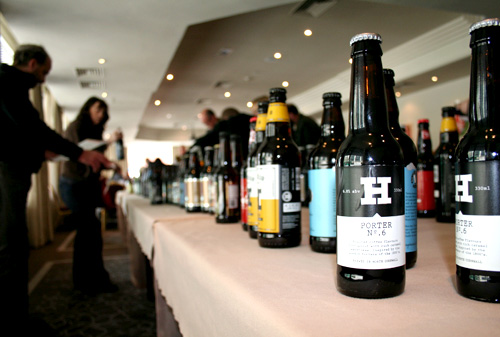 Beer: how do you choose yours? 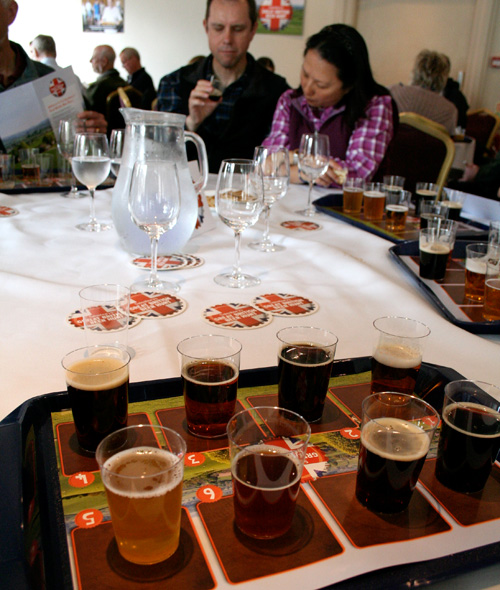