This year we’re experiencing our first dabble with a veg from a bygone age – skirret*. It may be a relative of the humble parsnip and carrot, but you’ll struggle to find any village show offering a prize for “most handsome skirret”. Its multitude of wobbly roots not only give it a faintly ghoulish appearance, but also make it very peeler unfriendly, which is probably more than the modern cook can handle, thus causing it to tumble out of fashion. But we are willing to do all we can to revive its fortunes.

We sowed our seeds back in spring. It’s slow to germinate and we never got to see our directly sown seeds sprout, but a simultaneous sowing in toilet tubes did the trick so our skirret adventure was underway. (Much like parsnips, early seedlings don’t like having their roots disturbed – loo rolls allow for transplanting without troubling growth).

Unlike their straight-rooted cousins, skirrets can be grown as a perennial. Plants are generally lifted from October** right through winter with the straggly roots snipped off to eat, while the central core can bit split and replanted.

They can be cooked in the same variety of ways you would cook carrots and parsnips, and taste a little bit like both of them. But we’ve got something else planned for our harvest. Possibly the first recording of a beer recipe (1800 BC***) derived its bitter flavour from an un-named ingredient which gardening equivalents of ‘The Time Team’ believe to be skirret. And we’ll be testing out its brewing capabilities later in the year.

**OK, so we lifted the roots pictured in September. We lost some plants among weeds and needed to confirm their survival.

***The recipe features in the poem “Hymn to Ninkasi”, an ode to the Sumerian goddess of brewing and beer. It includes the line “When you pour out the filtered beer of the collector vat, It is like the onrush of Tigris and Euphrates.” Can’t wait to try some. 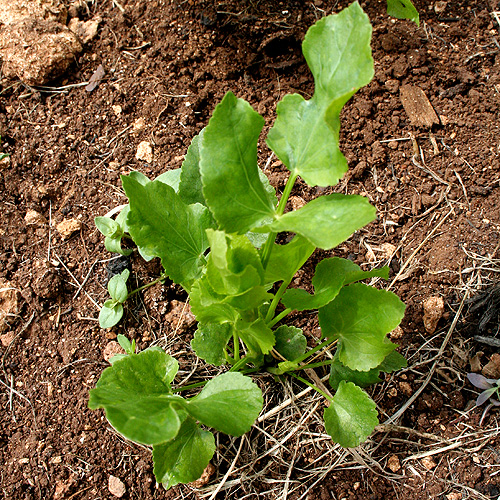 A young skirret plant. Before the weeds took over.