A few weeks ago, at a local gardening show, I discovered an interesting supplier of edible plants. ‘Edulis’ had a stall rammed with fascinating herbs, several completely new to me, but one label stood out above all others – ‘Vietnamese fish mint’. It’s impossible to ignore the irresistible lure of a curiously named plant, so I adopted the tried and tested policy of ‘buy now, find out about it later’.

So while the fishy specimen is loitering in the conservatory waiting to be planted out, here’s what I’ve learned thus far…

I’m not entirely sure why it has ‘mint’ in the name. It’s a member of the chameleon family and its leaves don’t taste remotely minty. Instead they have a slightly sour, metallic tang, described as ‘fishy’ by the Vietnamese. They’re used sparingly as a garnish in soups and salads or cooked with grilled meats and, of course, fish. Of more interest to me are the roots which are also edible. They grow to resemble a big ball of spaghetti, can be eaten raw or cooked and have an aromatic flavour like ginger or galangal but without the heat.

It looks like it’ll develop attractive white flowers but can be an invasive grower, so I’ll be sticking mine in a pot. I’ve yet to find any evidence of it being used in brewing, but who wouldn’t want an experimental glass of fish mint wine? 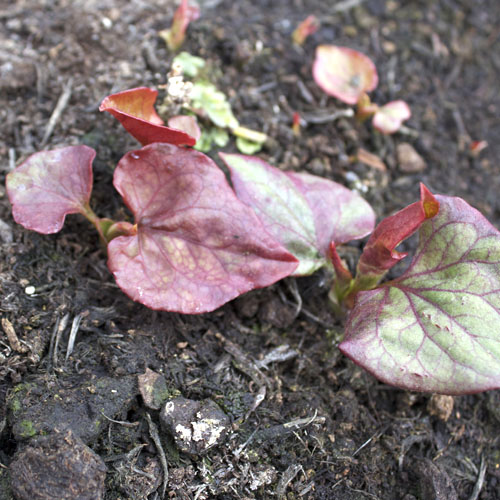 Update! May 2014 and the leaves have emerged. Looks nothing like mint. Or a fish.