When it comes to growing your own produce, few people possess as much knowledge as Alan and Jackie Gear. Their excellent book ‘Grow Your Own Fruit & Veg’ not only passes on years worth of easy-to-follow advice to us amateurs, but it also comes rammed with useful tips and recipes for preserving your harvest. So it’s about time we asked them to reveal a few of their secrets…

How did you first get into growing your own fruit and veg? What are your earliest memories?
Neither of us were experienced gardeners, although Jackie was a biologist, when we packed up our well paid jobs and moved to Essex to work for organic pioneer, Lawrence Hills, as scientists. He had started HDRA – the experimental organic horticultural organization (now called Garden Organic). It was a huge gamble as he could only pay us a tenth of what we were earning previously and we had to live on site in a small touring caravan. We were clueless at first, but we couldn’t have wished for a better apprenticeship. It was very much a ‘Good Life’ existence, growing all our own vegetables, keeping chickens and bees, bottling and preserving, and even grinding wheat for flour for our own bread. Hard work, but immensely satisfying, and all the time working on pest control and fertility building trials that would transform the way organic gardening was practised.

Your book contains growing and preserving advice for a vast amount of fruit and veg. What plants do you recommend a beginner should start out with?
The great thing about growing vegetables is that most of them are not difficult to grow, provided the soil is reasonably fertile and they are kept well weeded and watered. An absolute novice could start with radishes, lettuces or other quick maturing salads and be pretty much certain of success. Early potatoes are another winner, and thrilling when you come to dig them up, even for seasoned gardeners. Its probably best to avoid brassicas at first, simply because they can be attacked by so many pests, especialy pigeons and cabbage white butterflies. Nothing is more dispiriting than seeing your newly planted seedlings stripped to shreds as soon as your back is turned.

Fruit has an undeserved reputation for difficulty in our view. A row of raspberries and a currant bush or two will rarely fail, and are child’s play to manage.

Are there any fruit or veg that you’ve found especially hard to master over the years?
Trench celery! So many things can go wrong. It will bolt if you sow too early and the seedlings become chilled, or later if you don’t water regularly. We live in the East where we can go weeks without rain and it’s a constant struggle, making sure that plants have sufficient water.

There is a risk, too, of plants becoming stringy. And if you use some sort of collar, instead of earthing up, it is likely to provide a home for slugs which can wreak havoc. Self-blanching celery is easier, so we tend to grow that instead.

We’ve always struggled with cauliflowers, never seeming to get more than the occasional golf-ball sized harvest. Any tips we should look out for?
Cauliflowers are the hardest to grow of all the brassicas. A number of factors can check growth and result in small curds. You need to make sure that the ground is really firm (as for Brussels sprouts) and that plants never run short of water.  It’s worth installing trickle irrigation lines to ensure permanently moist soil. Cauliflowers also hate root disturbance, so always start them off in modules or root trainers – ideally they should be station sowed in-situ and thinned to the strongest seedling, but for reasons of space this is rarely possible. Too much nitrogen can also be a contributory factor in the development of undersized heads.

Home preserving seems to be rising in popularity and is particularly useful for a bumper harvest. This year we seem particularly weighed down with courgettes and raspberries. Do you have any winning recipes for those (not necessarily together!)
Jackie makes a mean courgette cake, using a wartime recipe. We were also thrilled to discover that we can make a low-calorie, gluten-free, alternative ‘spaghetti’ from courgettes, using a hand turned spiralizer – available, price around £30, from good cookshops. The machine can produce a mountain of green and white twisted ribbons from a couple of largish, unpeeled courgettes in seconds. Add them to your chosen pasta sauce in a large pan and gently heat for a couple of minutes to soften. They work particularly well with a creamy sauce – Jackie uses soya or oat-based ‘cream’.

We’ve had a great crop of raspberries too, and have frozen loads. Even so, I’ll be surprised if there are any left in the freezer by harvest next year. We give a recipe in the book for raspberry vinegar – a great favourite of Victorian ladies, who drank it as a pick-me-up and cure for sore throats. You could also try making raspberry vodka as an alternative/supplement to sloe gin. Just fill a kilner jar or similar with raspberries, add sugar equal to half the weight of the fruit, and then top up the jar with vodka. Put the lid on and then shake, shaking daily till all the sugar has dissolved. Store in a dark cupboard for at least six months, then sieve out the rasberries (which are delicious, by the way) and enjoy!

The book looks like a lifetime of work has gone into it. Is there anything new you learnt about growing and preserving while putting it together?
The main surprises were when we were researching the nutritional value of fruit and veg. Of course we knew that they were good to eat in a general sense and that some had more vitamins than others, but we were astonished by the amount of recent research, especially coming out of America, which showed how important they were in actively helping to prevent heart disease, cancer and other life-limiting conditions. We’ve changed what we plant as a consequence, growing more of some things, fewer of others. Apart from that, we had fun trying to make healthier low-sugar and sugar-free jams. We had quite a few failures, but it is possible!

We’re fans of heritage and unusual varieties of veg that don’t appear in shops. Can you recommend anything we should look out for?
It’s difficult to give specific recommendations – it depends on what you like to eat – but we would suggest that you join Garden Organic’s Heritage Seed Library. For a small annual fee you can choose from over a hundred varieties of home-saved seed with names you are unlikely to have come across before. Each member receives 6 free packets as part of their membership. This year, for example, you could be growing ‘White Belgium’ carrots, oval-shaped ‘Boothby’s Blond’ cucumbers, ‘Cherokee Trail of Tears’ climbing French beans or ‘Green Nutmeg’ melons. They have also started to list varieties collected and saved in the UK by ethnic minority communities; eg Vietnamese watercress, lablab beans and dudis (a type of Asian pumpkin). It’s a great initiative and well worth supporting, as well as giving you the chance to grow something new.

And, finally, a mean question – if you were allowed to grow just one fruit or veg, what would it be and why?
You’re right, it is mean! But after a lot of thought we’re plumping for strawberries. As with tomatoes, those you get in the shops bear no comparison with the delicious taste of ripe fruit, fresh from the garden. Strawberries have the longest season of any fruit, cropping from May in an unheated greenhouse through till August – you could harvest almost all year round, given the luxury of heated glass. They’re listed in our top twenty fruit and veg that are really good for your health too—-being packed with vitamin C and other antioxidants and phytochemicals.

However, we’re glad we aren’t restricted to just one fruit or veg, and can grow what we like! 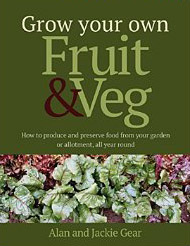