Around this time of year, our livers start to quiver.

Tradition dictates that each and every August Bank Holiday we must dutifully haul our weary bones westwards to the Frocester Beer Festival with an aim to conduct some important booze research. So like a pair of idiot moths repeatedly nutting a bare lightbulb, we returned once again and futilely attempted “not too get too drunk”.
Some readers* might wonder why this write-up is so late, but please have pity… we’ve only just been able to type in the word ‘beer’ without feeling green-gilled and giddy.

There were plenty of changes at the fest this year. The Dursley Lions and Frocester Cricket club have been the genial co-hosts since it’s conception way back in 1979, but with the sad passing earlier this year of Dennis Haddrell (Lion stalwart and one of the festivals founding fathers) the Lions have decided to hand over the running of the FBF to the cricket club, who were eager to ring in the changes.

Whilst the quality of boozes on offer had never been a cause of concern, FBF food options have always been a bit, er, basic – ‘rubbery pig ‘twix a limp bap’ option for meat-eaters, cheese and onion crisps for the vegetarian. This year however, there were all kinds of edibles on offer… curries, pizza, hog-roast**, pasties, the lot. Admittedly, we may have sniggered at the coffee and cake stall, but there was no doubt that the overall standard of beer soaking carbs had improved greatly.

The musical entertainment had also received a short, sharp kick up the jacksie. Out with the brass band and old men playing jaunty jazz, in with a selection of singer/songwriters***, bar room rock–combos**** , and the welcome return of a Bavarian Oompah outfit, the likes of which we have not witnessed since the ‘Frankfurter Schnitzel Band’ last graced the FBF stage/trailer back in 1995. Whilst largely enjoying their lederhousen-stirring, Germanically themed ditties, they did fall slightly short of our lofty Oompah expectations because;

They made up for these potentially disastrous shortcomings however, with an inspired rendition of ‘Wonderful, Wonderful Milford Haven’. The largely intoxicated crowd appreciated this and showed their appreciation by drinking heavily.

All in all, this was a resounding success for Frocester Cricket Club and was one of the best fests for many moons. Three cheers for the FBF… we’ll see you next year! (“Not if we have anything to do with it”, squeak our livers)

Gloucester Brewery
Galaxy
5.2%
A splendid pale ale with a smart citrus finish that pirouettes on the palate like a dancing grapefruit.
Website: http://gloucesterbrewery.co.uk

Worsthorne Brewing Co
Some Like It Blonde
3.9%
A very drinkable light ale with a good combination of bitter hoppiness and citrus aromas
Web: http://www.worsthornebrewingcompany.co.uk/
Twitter: No twitter 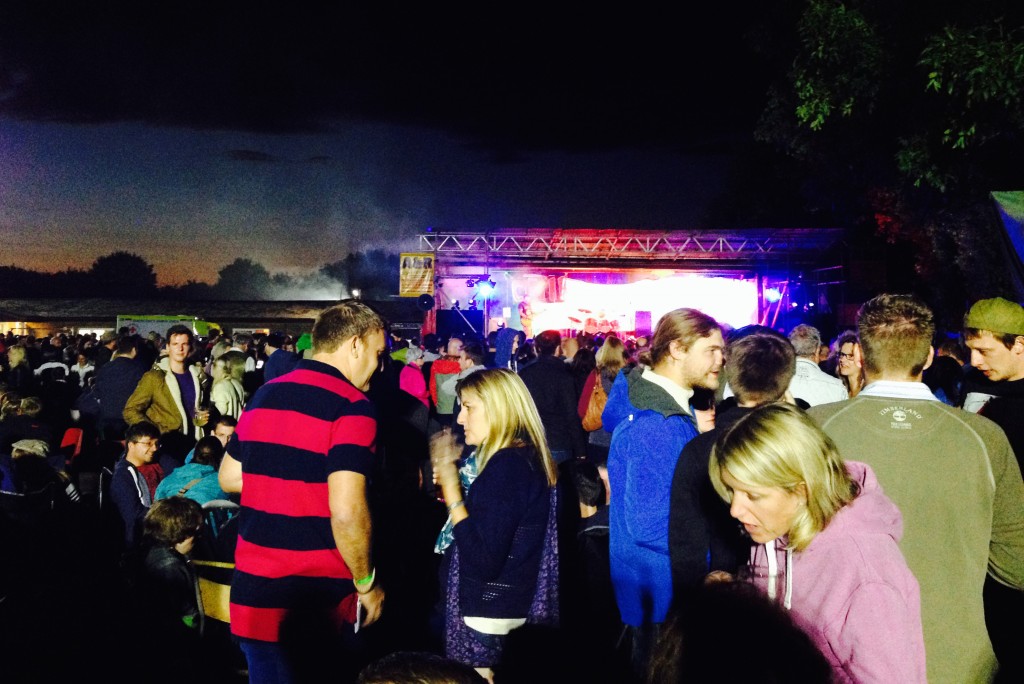 In the distance, a band. Playing a Reef song.

** Note to festival organisers… Simply call the hog roast ‘pulled pork’ and sell it for twice the price next year.

*** Is the collective noun for singer/songwriters a ‘Cowell’?

**** Pub rock setlist requirements: Oasis? Check. Limp Bizkit? Check. That one where everyone sings ‘Put your hands up’? Check.