It’s not every day we get the opportunity to interview rock legends, so when we found out that Status Quo’s Francis Rossi and Rick Parfitt had released a new beer and cider, emails were sent to their management faster than a rat running down the dustpipe (1). Rossi agreed to the request and Rich, being the keenest denim rocker of the two of us, was our designated interviewer. A telephone number was supplied, a precise time arranged and Rich nervously dialed the number…

Unfortunately for him, Rossi didn’t answer. He tried again and again (2) but still no joy. The interview was rearranged but poor rockin’ Rich was now unavailable, so it was up to me to chinwag with the great man instead…

I called at my newly allotted time and the phone was answered before it even rang, with Rossi chortling an apology for “catching me out” (and proving that previous attempts were most likely been Rich’s fault). I introduced myself, explaining a little about our website, but the Quo man was well prepared and knew all that already. A true pro Quo.

To help me out at such short notice, Rich emailed me his pre-prepared questions. But seeing as the best was “How about a range of Italian pizzas? You could call them Status Dough” I decided to ignore them, opting for an unscripted chat instead. So the first thing I wanted to know was how the beer and cider ventures came about…

“Our merchandising people were approached” Rossi explained “and we are always looking at things like that. Breweries want to sell more and think ‘we need someone to front it. Blondie and Baldie might do something’. We had another beer out a couple of years ago that did rather well* so we sort of said yes.”

Being rock legends, these approaches are a regular occurrence and, inevitably, more things get turned down than accepted. Were there, I wondered, any memorably daft requests they had rejected? “Somebody approached us once in Australia. They wanted us to front this company that was going to float the Titanic. This was the early seventies and the others were quite interested, so I said to them ‘why are they coming to us?’ If it was such a good project they would’ve gone to a finance house.’ So while the Titanic remains a piece of heavy traffic (3) languishing at the bottom of the ocean they can concentrate on the booze instead.

How then does Rossi rate the band’s new beer and cider? “Generally the public, when they see something out there allied to people in showbiz, they’re kind of sceptical. But, particularly the cider, I think it’s superb. I’m not particularly an aficionado but both the products – I’m sounding corporate calling them both ‘the products’ – have been well received thus far.”

But perhaps the quality shouldn’t be such a surprise, with both drinks being produced by respected industry professionals. The beer, called ‘Dog of Two Head Ale’ after their classic 1971 album, was brewed by Shropshire’s Hobsons Brewery, with Rossi and Parfitt having a close involvement throughout. “We were shown the process and had a few sips and suddenly the knees went ‘whoops’ and I thought ‘oh that’s got there’. But my thing is the cider” That cider, named ‘Down Down’ in honour of a 1974 single, was made by Herefordshire makers Celtic Marshes and, again, the band chipped in with the process, including a day spent harvesting apples. Thirsty work (4) indeed.

But what about the products names? At first Rossi was unsure about the marketeers suggestions: “What are we going to call it? Down Down? Oh fuck it, you’re not are you?” However, after further consideration, ‘Down Down cider’ began to take on a positive appeal, as did ‘Dog of Two Head’ for the beer. “I like the idea of ‘give us a pint of dog, mate.’ I can see people wouldn’t mind saying that.” And after drinking it might you  feel like you have two heads? “Definitely on those ales, they’re as punchy as fuck.”

Status Quo have built up a reputation for hard rocking and hard drinking. But, I wondered, has cider ever featured in their boozy escapades? Silly question. “I’ve known about cider a long time. When we first started in 1965 we were in Somerset in Minehead – we went to Butlins for a season, that’s the day I was sixteen. I remember it seemed to have bits floating in it, really coarse rough stuff, scrumpy. Getting shit faced and waking up thinking ‘what the fuck happened there.’ That’s a great word, scrumpy, people love to talk about their scrumpy cos of the word. Mmmm…”

Rossi seems to be drifting off on the thought of a pint of cider “I was going for a moment, yes” he confirms. “I’ve got a bit of a lust for it now. I’ve got to be careful. I’m a habitual type person. I start dropping the stuff back, but it’s lovely. I’m one of those drinkers, I will keep drinking the entire thing down in one. I love the idea of going to the pub and sitting there with a pint over an hour or something but I just don’t know how people do that, we’ll knock the friggin thing back and hence be carried home.”

I ask him if he, along with thousands of other cider experimenters, ever added blackcurrant to his cidery pint and, for a man who has probably been under the influence (5) of just about all forms of alcohol, of course he has. He recalls seeing Linda Nolan in Blackpool with his son who bought him a snakebite and black (cider, lager and blackcurrant) “knowing that his father has a sweet tooth. So I drank the fookin lot. I wanted to sip it, I loved the idea of sipping it but I thought, ‘oooh, look it …’ I don’t remember much about that evening other than I saw Linda Nolan come on and then it’s all sort of blank after that really.”

Having talked at length about drinking, I finally wondered if he grows any fruit or veg himself, this being a digging and swigging website. Given his love of cider perhaps a couple of apple trees? “I used to in my previous house. We had a large orchard – we used to get apples and all sorts of stuff. In this particular place now all I grow is garlic. I love garlic. I put garlic in everything. Some people do garlic ice cream, don’t they? No thank you.”

Status Quo, a no nonsense band. They rock ‘n’ roll and drink and beer cider. They’re never going to be the kind of act that does garlic ice cream. But just supposin’ (6) there’s a garlic grower reading this, looking for a no-nonsense band to front their product, then maybe it’s worth putting in a call into their merchandising people. They might just sort of say ‘yes’. 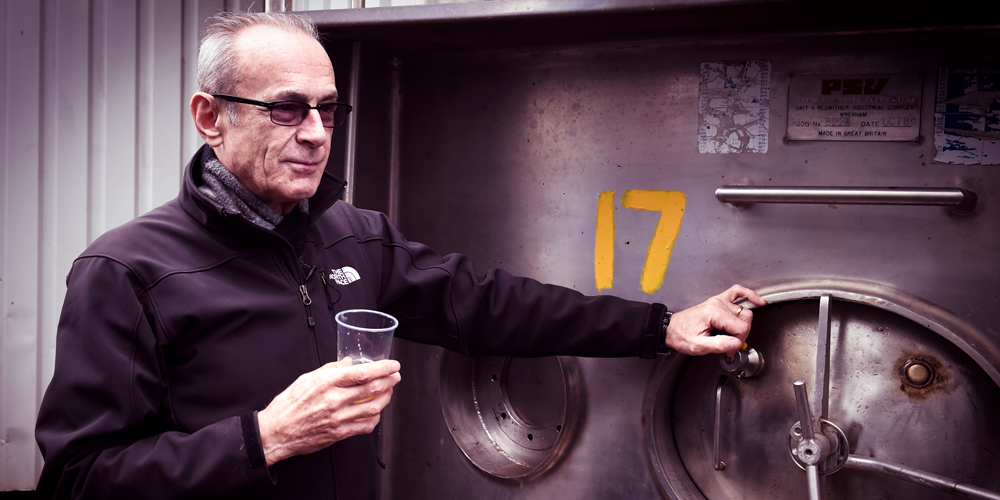 Seeing as Rich set up the original interview, the booze was sent his way. Here are his tasting notes…

Whoah! This is a lively one! Probably down to the fact that it’s been rolling around in the post office van like a drunken roadie on a tour bus. It pours the colour of  dirty water (7), but bright, you understand – no spicks and specks (8). And it tastes fine, fine, fine (9), – sweet, subtle malts strike a harmonious chord with a fuggle-hopped bitterness. A nice example of a classic amber ale that doesn’t break the rules (10).

5% of the profits from sales of this ale will be donated to the Dogs Trust charity.

Pop the cap and this cider fizzes like a Rossi riff. And it’s surprisingly well balanced – not the rough, foot to the floor head banger that I was expecting. It’s a cider that stays true to the Herefordshire-style – the slightest hint of tannins and not overloaded with acidity, giving an altogether softer ride (11). And at 4.6%, it’s not a heavy hitter, certainly not a cider that’ll make you roll over lay down (12). But I ain’t complaining (13)… don’t want to be left a broken man (14), feeling like a zombie (15) after two or three pints. 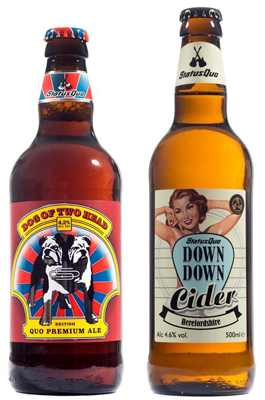 Nick: Mean Girl, April 1973
“I had this on a cassette that I think I got from saving tokens on biscuit wrappers. Infectious guitar rhythm, crude rockin’ lyrics. Here they are slaying it at Glastonbury in 2009”

*’Piledriver’, named after their 1972 album, sold over a million and a half pints in the UK alone