Rejoice! Posh retailer Marks & Spencer has added some exclusive beer imports to its already impressive range. This is especially good news for Nick because M&S is his closest supermarket meaning minimal walking for maximum beer pleasure.

This new range includes the likes of American outfits Ska Brewing, Six Points and Hardywood, Norway’s Aegir and Amundsen Bryggeri, along with four beers from one of our favourite ever breweries, Danish experimenters Mikeller.

Rejoice again! It’s Ryder Cup weekend. One of the greatest sporting occasions pits Europe’s golfing elite against America’s finest club swingers and we’ll* be glued to the radio and telly for three days, immersed in the tension with a few beers to see us through.

Here’s how it goes. Pick one beer to represent Europe (we’ve opted for Mikeller’s IPA ‘Hair in the mailbox’ in honour of Europe’s captain, Thomas Bjørn, who is also Danish) and one beer to represent America (M&S has been raided for Ska Brewing’s IPA Modus Hoperandi). Then all you need to do is take a swig of the relevant beer when one of these events happens…

Now load up on beer, enjoy the golf, don’t get too carried away with the booze and, most importantly… EUROPE: GET IN THE HOLE.

*Maybe not ‘we’. Rich doesn’t much go in for golf. But if there’s beer drinking to be had then he might change his mind… 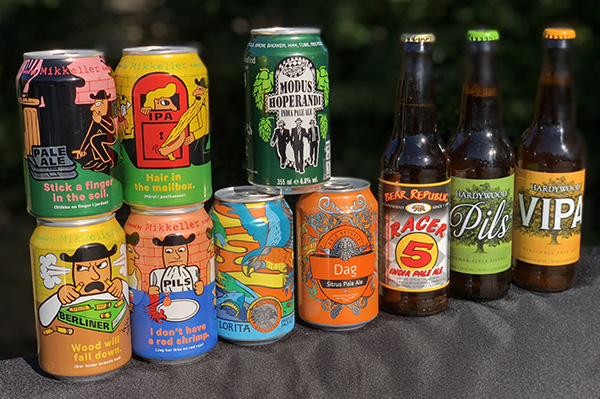 Some of the new beers on sale at M&S. A Ryder Cup fan’s beery dreams…