We haven’t previously featured much information on sherry. The only times it tends to get mentioned are either when we’re enjoying a whisky that has been aged in sherry casks or if one of our home made wines has turned out stronger than expected, giving it a boozier sherry-like flavour.

For sherry novices like us, choosing what type to buy isn’t obvious, so we’ve teamed up with sone of Spain’s oldest producers, Bodegas Barón, to find out more about each style and what to drink them with. They own three Albariza vineyards, totalling about 140 ha. in the area surrounding their base in Sanluca, and their portfolio has three levels – Micaela, Xixarito and Soluqua – which refer to the varying lengths of time the sherries have been aged.

Sherry is a fortified white wine made from grapes grown near the city of Jerez de la Frontera in Andalusia (the word ‘sherry’ is simply a re-spelling of Jerez for English folk who couldn’t get their chops around the Spanish accent) and there are various styles depending on factors such as the wine’s sweetness, how long the sherry is aged, and levels of oxidisation.

What are the types of sherry available?

To give you a guide to the different sherry styles, and how best to drink them, we’ve picked out some of the main types as outlined below…

These light sherries are the driest available and tend to have around 15% to 17% alcohol by volume. They’re aged in a ‘Solera’ (ageing barrel) and are covered by a ‘flor’ (layer of yeast) which prevents oxidisation. They’ll have an almond aroma and a slight acidic bite to the dryness.

How to drink Fino: Serve chilled and enjoy with salty food. Great for a tapas starter of salty meats or nuts.

A Manzanilla is very similar to a Fino sherry in production but is made on coastal regions (Fino sherries are produced inland). It has a similar dry snap to it and most experts will claim the sea air gives it an even lighter feel.

How to drink Manzanilla: Another chilled serving with salty tapas accompaniments is best and, given its place of production, seafood is its ideal partner.

To make this sherry the protective Flor used for Fino sherries is allowed to naturally break up, exposing the booze to the air and causing oxidisation. This results in a dry sherry with a darker tone and some earthier, nuttier notes coming through to the palette.

How to drink Amontillado: This only needs to be lightly chilled and is great with more flavoursome tapas and main course dishes such as chorizo or grilled fish.

This is an unusual sherry that you won’t find too readily owing to the seemingly random ageing process it goes through. It starts out the same way as an Amontillado (with a flor that breaks up) but by some mysterious kind of Spanish magic it develops a darker, reddish hue and richer, buttery flavours (similar to an Oloroso).

How to drink Palo Cortado: It’s another dry sherry so can be served in a similar way to Amontillados but we think its special production calls for a special kind of foodstuff: pork scratchings.

These dark sherries are made from a wide range of grapes and can therefore come in a wide range of styles, from sweet to dry. The protective flor is intentionally broken up during ageing which gives them their richer colour and more intense toffee flavours. They’ll also be stronger, fortified to over 18%.

How to drink Oloroso: Lightly chill and serve with bolder flavours for leisurely supping. A good Spanish cheese such as manchego is hard to beat.

This sherry is made from Pedro Ximénez grapes, a sweet variety that is allowed to dry in the sun before fermentation. It tends to have a lower alcohol content to other sherries, a dessert wine sweetness and syruppy texture, with lots of rich fruit and molasses flavours.

How to drink Pedro Ximénez: As with dessert wines this is to be served lightly chilled and either enjoyed as the last course of a meal (especially if you’re skipping dessert) or with a not-too-sweet pudding.

These categories are sherries that have been sweetened. Anything simply labelled as a ‘Sweet Sherry’ is likely to be a sherry sweetened with Pedro Ximénez grape juice whereas a Cream Sherry is sweetened with the Pedro Ximénez sherry. Confused? Don’t be – just see them as richly flavoured, sweet sherries and get on with enjoying them.

How to drink Sweet and Cream Sherries: These are the sherries to drink with dessert. Drizzle over ice cream, guzzle with a slice of cheesecake or sup with some custard creams on your granny’s sofa on a Sunday afternoon. Delicious. 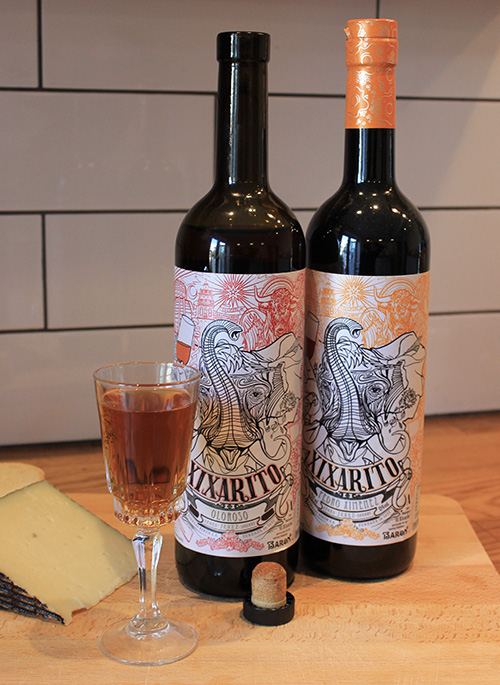 Bodegas Baron sherry is available from leading Spanish restaurants such as Bar 44 which provide the perfect setting for sherry novices to discover more about the various styles and food pairings.