Following on from last year’s oca growing success I welcomed another Andean tuber to my veg patch: the mashua. It was introduced to me by grow-your-own guru, Carl Legge, who promised it would perform wonders in both the garden and the kitchen.

With the confidence of a mighty oca haul under my belt I shunned any mashua research, trusting my experience to steer me on a path to success. I then proceeded to make a series of mistakes that would spell death for any lesser veg. But not the mashua. Spurred on by mysterious Incan spiritual forces it proved to be something of a miracle plant.

As anyone knows, tubers, such as seed potatoes, need to be stored in a cool, dark location with some airflow. The mashua is no different. The cool and dark I managed but, for some reason, wrapped the tubers in a bag that allowed no air to circulate. After several months in storage my five mashuas had shrivelled to a third of their original size and developed unhealthy looking black blemishes. Despite this obvious error I went through the process of ‘chitting’ them. Unsurprisingly, they couldn’t give a chit, remaining unmoved and wrinkled.

With blind optimism I planted them out anyway. Their odds on survival were low so I decided not to waste the best areas of garden on a long shot and gave them the corner most resembling a bog. For weeks, nothing showed. But after a while, what looked like nasturtium seedlings began appearing above ground. Google revealed the two are related. The pan pipes rang out in celebration.

Growth was slow. The neighbouring ocas spread to a leafy mass, their flowers came and went, but the mashua barely expanded. Then, as we drifted into autumn, they started to look more interested in life and began growing with some haste, crawling along the patch and up the side of my brassica netting. Back to google and, yes, they’re climbing plants.

They flowered small orange trumpets and continued to grow. So last week, in mid November, I decided to dig my first plant. And behold, the miracle was complete. Nestled tightly within the centre of the root ball was a mighty harvest of nobbly, waxy mashuas. Each one in pristine, blemish free condition. And to complete the miracle they’ll even survive the frosts.

Mashua can be eaten raw or cooked, possessing two totally different flavours. Raw, they’re like an extra hot, crunchy radish with a hint of smoky aniseed to them. Cooking (roasting being my favourite method) transforms them to a soft, creamy texture with a slightly aromatic, starchy fennel flavour. They’re delicious and, with their insistence on growing despite what idiot gardeners put them through, they deserve to be a much more commonly grown crop. 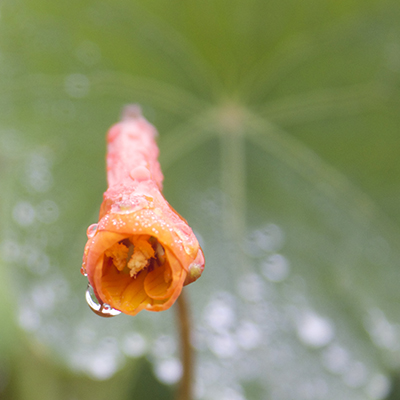