A few weeks ago we were chatting with some folk from supermarket supremos Aldi about their water butts. As with too many of our conversations, the subject quickly turned to booze. Noticing we write quite a bit about the stuff, they enquired if we were aware of their ‘award winning range’ of alcoholic drinks. With shamed faces we replied that we weren’t.

They pointed us in the direction of a few of their summer favourites, whereupon our eyes alighted on some gleaming bottles of triple sec – an orange liqueur beloved of cocktail makers. At this point we got a bit carried away and got a bottle each – if it was any good we would both come up with a cocktail recipe featuring the triple sec and see which one is the best.

It’s good. So first up, here’s my rhubarb sour recipe. Rich’s ‘sloe gin and orange’ is to follow…

Traditionally, a sour is a fruity cocktail containing a good dose of lemon or lime and an extra hit of liqueur. It is often topped with egg. Being egg fans, mine is definitely coming with an egg on board.

It’s also rhubarb picking time, and we’re rife with the stuff, so I figured its natural acidic qualities would go well in a sour drink and offset the sweetness of the triple sec. And besides, rhubarb and orange is one of my favourite flavour combinations.

To make this cocktail, you first need to make a rhubarb syrup…

Dice around 400g of rhubarb and place in a pan with 100g white sugar and 250ml water. Bring to a boil then simmer for 15ish minutes until you have pink* pulp. Strain off the liquid and chill it in the fridge where it will keep for a week or two. (Note: you’ll likely have more syrup than you need for a round of cocktails, so dilute the extra for squash or use it in desserts).

To make the cocktail you need 1 measure of gin, 1 measure of triple sec, 2 measures of rhubarb syrup, 1 measure of lemon juice and the white from a single egg. Chuck the lot into a cocktail shaker and give it a vigorous shake. Not a fancy sashay above the head: A GOOD HARD SHAKE.

Add a few ice cubes and shake some more, until your brow contemplates the prospect of sweating. Strain and pour into your daintiest, chilled cocktail glass where the frothy egg white should create a layer above the boozy pink* liquid. Decorate with a couple of strips of orange peel.

*Or, if your rhubarb is like mine – mostly green – it’ll be a murkier pink liquid, but none the less attractive for it. 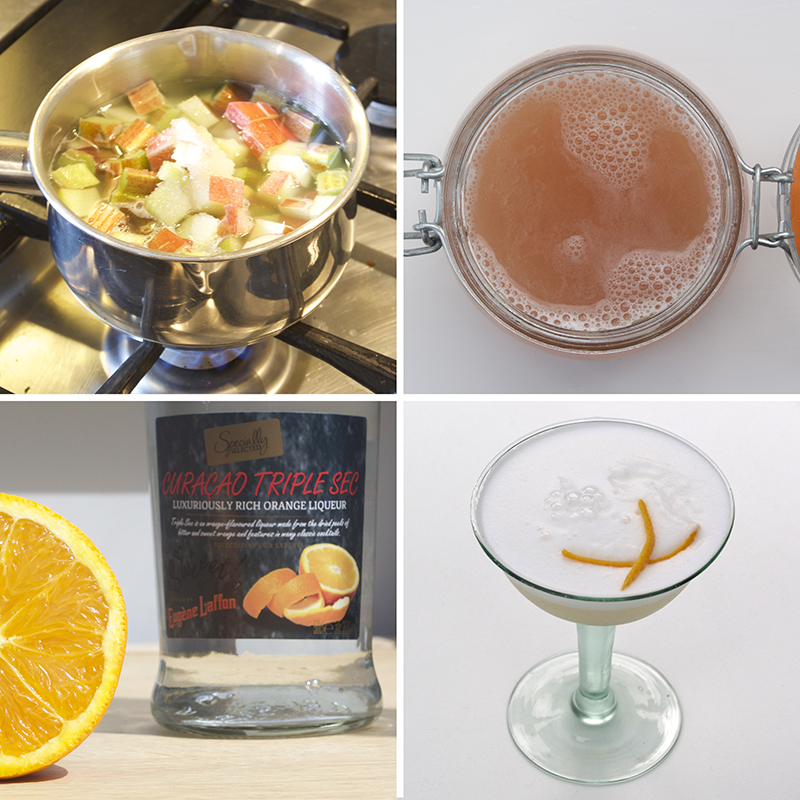 Thanks to Aldi for supplying the triple sec