Hampton Court Flower Show is celebrating its 25th anniversary this year and, giddy with birthday conviviality, the RHS kindly cast a couple of press day invites in our direction.

Nick declined the invitation, citing the old ‘too much real work to do/sick greyhound to tend/don’t want to spend 3hrs in the car listening to your awful CDs’ excuse. So it was to be a solo visit for me, with no one to talk to but the satnav.

(Talking to satnavs is ok, yeah?)

Pressure was on to return with something blog-worthy, so I made extra care to remember everything: Press pass, camera, spare camera, notebook (to look important), all that kind of stuff, but – laughably – forgot to take a hat and sun cream. On the hottest day of the year.

Having a press pass affords the holder unlimited access to the ‘press tent’ – a tempting prospect indeed, and sure to afford some respite from the heat, I naively thought. In reality the ‘tent’ turned out to be more of a Wi-Fi enabled portaloo, housing rows of sweating hacks filing flowery copy to their absent, air-conditioned editors. I left them to their moist laptops, choosing to spend my time darting between marquees to avoid the scorching sun burning stripes on my thinly turfed scalp.*

Out and about at ‘The Court’

One of the coolest hangouts was inside the vast flower marquee. Not only featuring the very best in horticultural excellence, it also appeared to be the place where visiting high-vis school kids were taken to be told off by prickly teachers, exasperated by their endless cries for ice creams. Stand out displays included our pals Hardys Plants, who had set up shop with another triumphant floral explosion. Likewise the ‘Every Picture Tells a Story‘** stand, where their display of impossibly hued bromelaids provided rich material for photographers taking ‘succulent selfies’.

Fine specimens in the Floral Tent

Fortunately, a scheduled interview at the ‘Turkish Garden of Paradise’ afforded some relief from the midday heat, conducted in the shade of a wrought iron pavilion, in arguably the most fragrant, shadiest spot of the entire showground. You can read our interview with the designer Nilufer Danis here.

Pushed for time, post-interview, I managed to swing by a few gardens for a ganders before scooting off home. I had a peek at the ‘Henri Le-worm Community Garden’, designed by Chris Collins. A commendable cartoon collaboration (the garden, not Collins), designed to engage kids with the great outdoors, featuring easy access veg beds, chicken coops and an outdoor kitchen – all of which were overseen (and overshadowed) by a giant moustachioed annelid. Our pals from Squires were there too, with their ‘Urban Oasis’, a wild flower infused tranquil retreat that was throbbing with bees. 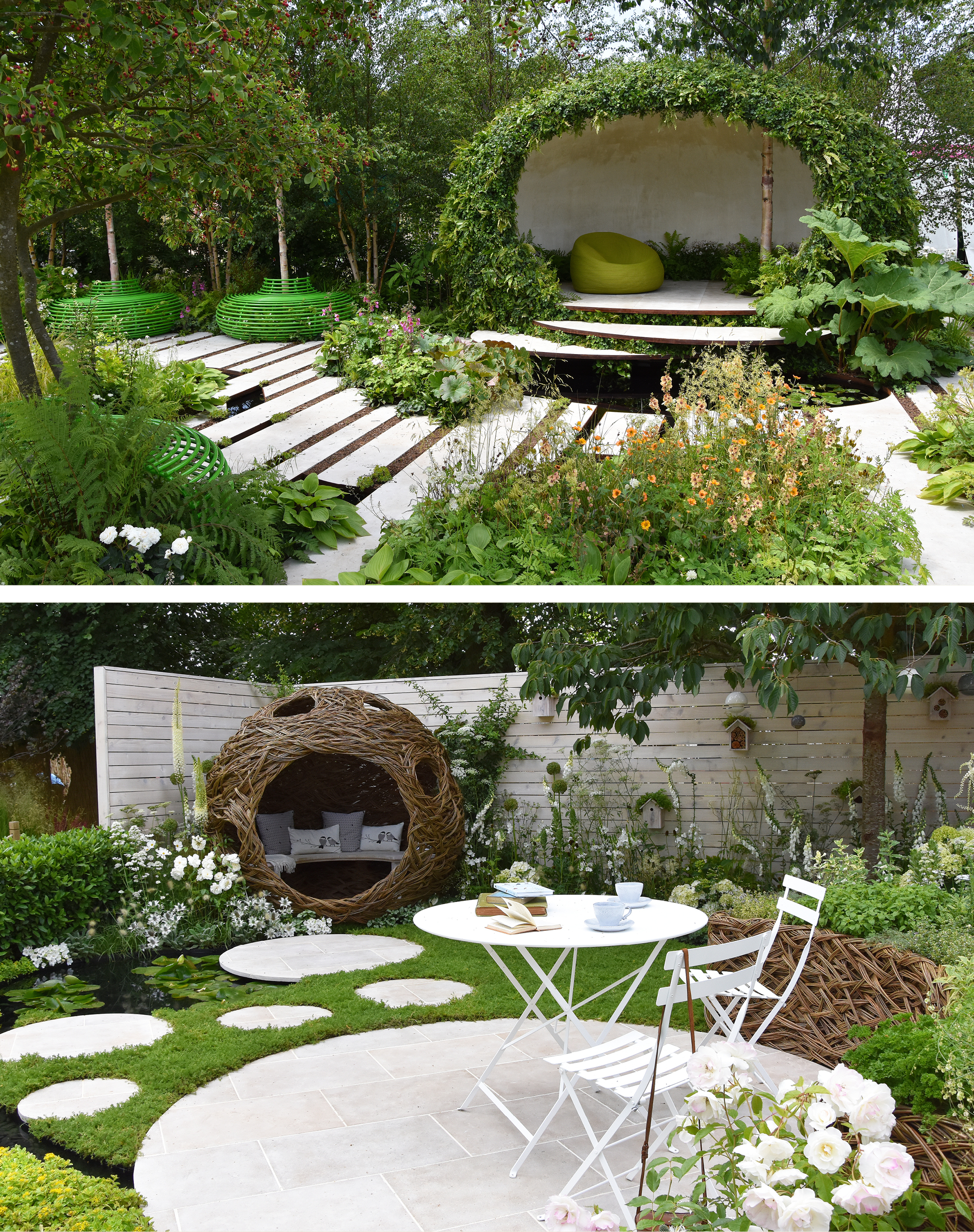 Hampton Court Flower show really is plant Nirvana – a horticultural heaven that deserves all the plaudits it gets. My time there was short but undeniably sweet, tainted only by the raging sunburn on the back of my neck. (And the noticeable lack of beer tent***).

After a swig from the water bottle left in the sun on my car dashboard (the temperature of pyroclastic flow), it was time to leave.

‘Happy anniversary Hampton!’ I croaked, then joined the M3 contraflow for an evening’s appointment with Dr Aftersun.

*OK, so I could’ve bought a hat. There were lots of stalls selling those white gardening trilby things. But unlike Joe Swift who looks undeniably dapper in one, I can’t really pull off the look. I’d resemble a dodgy ice-cream seller. Or someone who should be operating a sausage machine in a back street butchers.

***Plenty of Pimms shacks and champagne bars, but no sign of any brown booze on offer. We know RHS committee member Jim Buttress is a massive Meantime Brewery fan, and a beer tent would certainly go down a treat. Next year, eh chaps?