Last weekend we were at Craft Beer Rising 2016, a festival of booze housed in Brick Lane’s Truman Brewery as part of London Beer Week. Usually when we attend beer festivals we simply drink pints, eat pork pies, then deal with the hangover later. But with CBR16, we were there to work.

First we presented a ‘tutored tasting session’ for some of the fantastic appley boozes muscling in on the hop ‘n’ barley scene, before presenting a segment of a home brew workshop alliteratively titled ‘Ferment, Forage, Feast’. This session took dazzled* punters through a beery journey of discovery, starting with Scottish brewing maestros Williams Brothers, who demonstrated the ease at which beer can be made using home brew kits while generously allowing them to sample their fine heather ale ‘fraoch’.

The next stage saw the groups arrive at our action-station where we were joined by ‘open brewery’ UBrew (pictured above). They had pots, pans and hot flames to bubble up a real, live beer, telling their telling their increasingly inebriated audience how to step up from those basic home brew kits to the more professional practice of ‘all grain brewing’. Meanwhile, we were giddily talking them through an array of home grown and foraged ingredients, such as wormwood leaves, chicory and dandelion roots, that could turn the most basic brews into wild creations. We let them sup our own rosemary and coriander ale while the UBrewers casually tossed real heather into their bubbling pot for a unique CBR fraoch.

The tour ended at the table of ‘feast’, presided over by Melissa Cole – ace beer writer, sommelier and mastermind of the whole workshop.*** Here she showed the boozed up masses how best to pair beer with food, cunningly including some of the hottest chilli snacks known to mankind to rekindle the thirst of anyone suffering from drinking lethargy.

Either side of work we considered it our duty to roam the halls sampling beer from the master craftsfolk who brew for a living. There were hundreds of beers available, so we couldn’t possibly claim to have tried all the best ones, but from the many we did manage to sink, here are our top five…

We’ve been keen to meet up with the chaps from Kew Brewery for a while so were pleased to see them at the festival, touting their wares from the greenest looking bar at the show. Anyone with a connection to gardening palaces such as Kew is good by us, and we also like it that they  boast British-only ingredients in their recipes. Their rye beer was a particularly impressive drop of hazy orange nectar with a spicy, tart twinge of rye interrupting the deliciously fruity, bitter hop flavours. A brewery to watch: we’ll certainly be back for more…

Despite being one of our local breweries, this was the first time we got our chops around Electric Bear’s Cherry Blackout. The Bath brewery has rammed this beer full of cocoa nibs and perked it up with rich morello cherries. So tasty that Rich has already declared it his ‘beer of the year’.

Following our cider tasting session, beer expert Des de Moor** gave a fascinating talk on London brewing history, with a few beery tasters thrown in. One of these was Truman’s London Keeper, a luxuriously toasty, nutty and treacley stout based on an 1880 recipe from the Truman Brewery archives, and the first brew from the new company that has resurrected the Truman’s name. Only 2,000 bottles were produced so this was a very rare treat.

The poor folk of Islay were unable to get their usual fix of beer direct from the island’s brewery this weekend because the whole team (all three of them) were on their annual works jolly at CBR. Lucky for us, because we’re big fans of this traditional style brewery’s output and this beer is new to us. It’s another dark drop with a lovely smoky, malty background giving it a real flavour of wild Scotland, a nice break from the bustling trendiness of our London location.

Our drunkenly scrawled notes have let us down on this one and we’re not sure exactly what beer they refer to. We have written ‘Mikkeller Simcoe’, but the celebrated Danish gypsy brewers knock out so many beers they have many named after the Simcoe hop. Seeing as those same notes describe it as “cloudy, sour, less cheesy than the Belgian lambic, amazing” we’re guessing it was the Spontan Dry Hop.

**For an in depth guide to London brewing check out Des’s superb CAMRA Guide to London’s Best Beer, Pubs & Bars

***Melissa also has also written a book, ‘Let Me Tell You About Beer‘, which is also well worthy of your attention 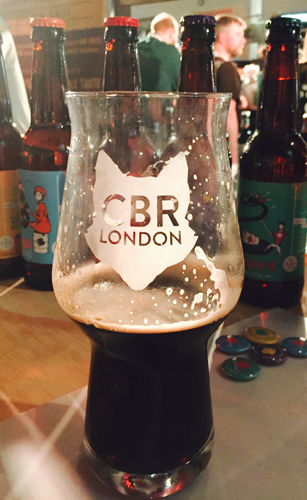 Electric Bear’s Cherry Blackout. Could this be the best beer of 2016?