Thank you to the organisers of Frocester Beer Festival for another excellent weekend of boozy entertainment. We’ll gloss over the decision to replace glass pint pots with plastic (please, never again) and we won’t dwell on the choice of closing band*, simply being grateful that the problem was dealt with.

Instead we’ll remember the perfect Saturday drinking weather – warm and sunny but with enough passing light clouds to avoid fried skin – and the greatest ever line up of beers.

The highlight of the day was a setting sun, casting a pink and orange glow across Gloucestershire’s gently rolling hills, which prompted festival-goers to fold their beer lists into paper planes and launch them into the colourful sky, creating a silhouetted display of a hundred swooping, dipping and crashing aircraft. All this to a background of fiddle and banjo folk and the happy chatter of beer-talk.

For the second year running Rich had better things to do** so again the task of picking out the festival’s best beers fell to me, aided as always by my drinking pals…

Anarchy, Smoke Bomb, 3.9%
Smoked beers divided our group between me (I like them) and everyone else (not fans). They’re not easy to get right, but this pint was mightily impressive. Dark, but not heavy, with a fresh grainy sweetness and enough smoke to be always present without killing the rest of the flavours.

Marble, Frazzle Rock, 5.9%
One drinker in our group, Rory, decided to work his way through every porter and stout at the festival.*** For most of the day Blue Monkey’s Guerilla Special (a chocolate amaretto stout) was top choice until he noticed he’d missed out an entire section of the drinks list that included a smoked porter from Marble.**** It instantly had everyone purring with admiration: a thick, creamy beast with lovely chocolate flavours and such a subtle lick of smoke that they all decided smoky beers aren’t so bad after all. Good work, Rory.

Roosters Rockefeller, 4.4%
This Yorkshire booze wasn’t even on the list, only showing up as a last minute substitute for a failed cask. And what a bonus booze it turned out to be – an easy drinking pale ale that was gratefully guzzled at a time when the palette began to get a little weary. My even wearier tasting notes describe it as having ‘an unusual fruit lipsalve flavour’ which I’m certain was meant to be a compliment.

Cronx, Nektar, 4.5%
One of the great things about Frocester’s beer menu is the huge number of boozes from breweries I’ve not even heard of. Cronx was one of them and I was mightily impressed with their pale ale. That menu correctly described it as possessing blackcurrant favours and aromas which were presented in a modern, fresh and juicy kind of way, with soft malt and a spicy finish to complete the piece. 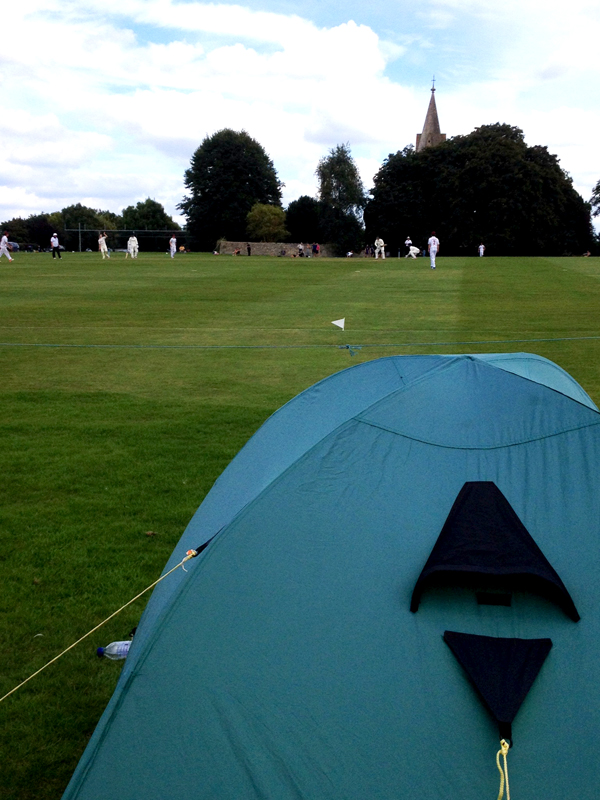 My tent, pitched next to the cricket ground. After 20 years of service, and much patching up, it finally broke beyond repair while taking it down. A splendid innings.

*Guitar noodly, misery-laden songs with an Eddie Vedder impersonator on vocals. Perfectly acceptable in a dingy bar; totally wrong for beer-swilling revellers desperate for something to dance to. They soon exited stage left and were replaced by a mix tape.

**Erect a polytunnel, a chore that elicited much swearing, no doubt including phrases that started “If only…” and ended “…beer festival instead.”

***When finished he switched to the cider menu. None were worthy of a mention.

****I made an instant beeline for Marble, one of my favourite breweries, starting the day with their excellent Manchester Bitter… but we’re not allowing two beers from the same brewery in this top five.