A good pal of ours (who’s name we have removed to protect his privacy*) has just been diagnosed as a coeliac. Our first reaction was to laugh long and hard and to fill his inbox with pictures of celeriac, but now we are left celeri-wracked with guilt. No one loves beer more than our nameless pal**, and for him to be denied his beloved brown booze is a cruel twist of fate. To make things right and to clear our conscience of having partaken in such callous, childish mockery, we have purloined and guzzled some gluten free beers and eaten a delicious gluten free pie in an ode to his ailment.

PIE
You’d be pushed to find a better drink than a pint of brown booze, and there can be no finer culinary combo to said pint than a lovely pie. ***  We are no strangers to the delights of the short crust. Many years ago, both ourselves and our mystery pal sat on the judging panel for ‘King Pie’ – Total Football Magazine’s ‘Best Football Stadium pie’ awards and bravely fought our way through many trays of savory delights to find the eventual winner (the name of which we can no longer recall).

The gluten free pie on trial hails from frozen food purveyors Field Fare and we reckon it’d give those stadium pies a run for their money. This pie is built to reside in frozen form in the freezer – whip it out, lob it in the oven and 40 mins later it’s ready for noshing.

This pie yielded hefty pieces of hock and decent slabs of chicken, doused in a thick, creamy sauce. The pastry was crisp with a good crust to filling ratio. If we were being critical (which, of course, we are), we thought the pie tasted a tad on the salty side. It made us drink more beer, which in turn made us hungry for more pie. A vicious circle.

Did we miss the gluten? Can’t say that we did.

PINT
Brewed by Belgian brewsters Brasserie La Binchoise, Golden Era eschews gluten-rich wheat and barley in favour of a heady mix of ancient grain: Quinoa (those gritty bits found in posh salads), millet (not to be confused with the female mullet) and buckwheat – a coeliac friendly seed that pretends its a grain – are all present.

On pouring, the frothy head receded quite quickly, leaving behind a murky, apple juice coloured pint that would have any haze-crazed New England beer hipster swooning with delight. It’s quite a pokey little number on the tongue with an initially harsh grapefruit tang. This soon resides to reveal a rather complex tasting , floral brew with plenty going on.

Did we miss the gluten? It certainly misses the viscosity and mouthfeel that wheat/barley additions afford. It’s an odd beer for sure, but definitely one worth persevering with.

On a happier note, our coeliac pal who shall remain anonymous**** is to fill his brown booze void with local cider of which Bristol – the city where he lives – is awash. This is good news indeed. It means his popeye-esque drinking arm will not wither and waste away to a wizened claw with lack of pints to lift. But this does mean that those sulphate filled pints of cider will wreak havoc with his gout.

Now where’s that picture of the mutated radish that looks like a foot…?

To get your fill of Golden Era gluten-free beer, go here

To fill your own face with gluten free pies and other frozen delights, go here… 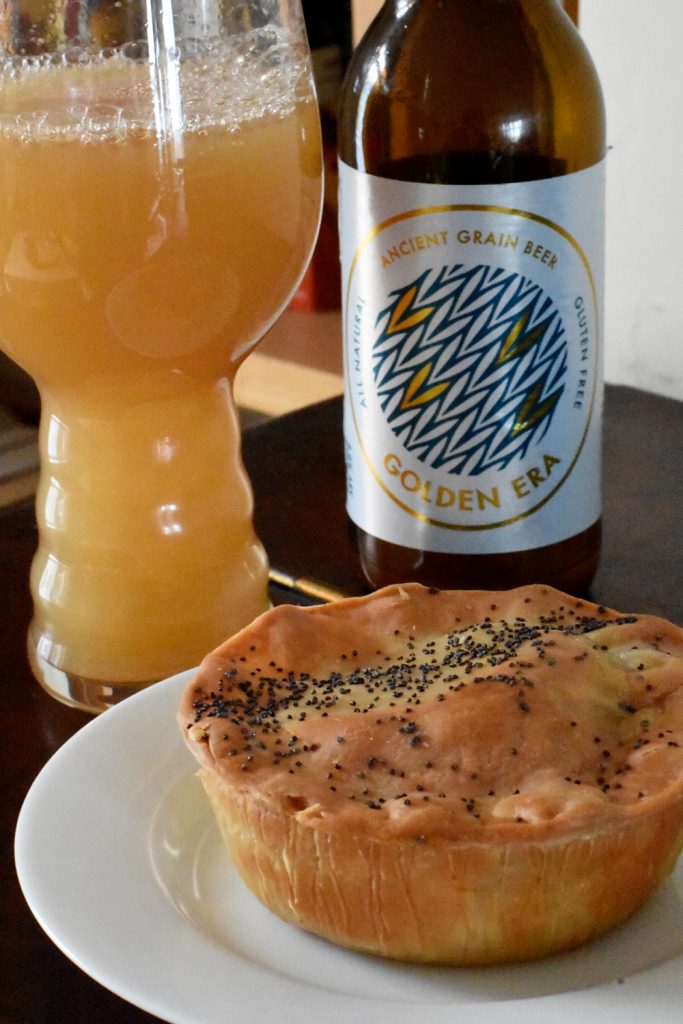 * Dav Ludford.
** His name is Dav Ludford.
*** Apart from ham and eggs, lamb and mint, cheese and tomato, chips and gravy, cider and scotch eggs, sausage and mash, crisps and fags, chicken and baskets, etc…
**** See * and ** above