Most of the beer we drink comes from our patch of the south west. That’s because most of the pubs and retailers we visit sell a lot of local booze and we like supporting our local businesses.

But we still like to augment our local favourites with beer from the rest of the UK and the occasional sampling of foreign stuff. And not only are we eager to taste what the rest of the world is up to but a steady stream of new beers from overseas keeps our local brewers abreast with global trends, inspiring them to innovate and push their brewing boundaries in new directions.

A few days ago I was invited to a London lunch hosted by the American Brewers Association, where some of the most exciting new American beers were enjoyed in the company of some of the American brewers that made them. Of the drinks showcased only one had previously been notched on my tastebuds – Hardywood’s VIPA, a Virginian IPA so tasty we gave in a top ten slot in a piece for the Independent – and the others were so impressive that I’ve decided to pick out my five favourites for this blog. So here goes…

Beers from Hawaiian brewery Kona have made an impression on the UK drinks scene, but this was my first tasting of anything from Maui. One of two beers they supplied (the other was the tropical and punchily bitter Big Swell IPA), this lager was my gentle introduction to the event and it quenched my immediate thirst a treat: a very light and easy going beer with a bit of malt character peeping through at the finish. 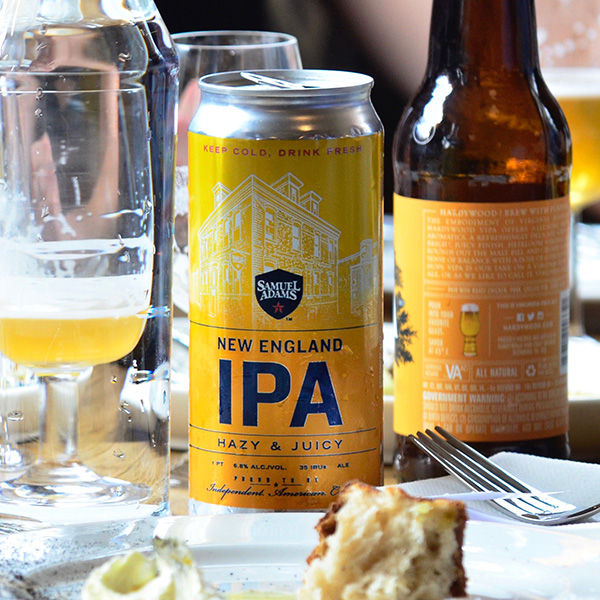 It was inevitable that at least one of the beers on the menu would be an in vogue New England IPA, and this hazy treat packed the requisite hop juiciness and more. Galaxy, Simcoe, Mosaic, Citra and Cascade are the hops that combine to serve up a full-on tropical storm while wheat and oats add some creaminess to the malty base. The Samuel Adams range of beers is always worth investigating and this new offering shows the brewery is still hitting the high notes.

Although a rapidly increasing number of UK breweries are barrel ageing beer (including our local ace experimenters Wild Beer) we don’t think many have quite achieved the consistently brilliant results of their Belgian and American counterparts. This Fifty Fifty porter is brewed with vanilla, coffee and cocoa nibs and all three ingredients are obvious from the outset, mingling nicely with the roasted grains and woody matureness. It has a lovely full bodied feel creating the impression of a boozy ice cream sprinkled with dark chocolate.

I feel massively lucky that I’ve had some of Lickinghole Creek’s barrel aged beers before. They’re of such a luxuriously high standard that the feeling of drinking one must be akin to a wine buff dipping into a cellar for the most expensive old vintage he can find. This Bourbon Barrel Aged Imperial Russian Stout is immediately boozy, full of oaky alcohol flavours, roasted coffee, bitter chocolate and hints of spicy, fruity sharpness that brings those expensive old red wines to mind. Amazing stuff.

Having started with a light lager, before moving through the gears to an imperial stout (all accompanied with some amazing food from restaurant Brat) it was a smart sommelier’s stroke to finish with a light and refreshing Berliner Weisse. West Sixth provided us with a clean, simple example of the style – the sourness had a cidery crisp and acidic bite and it had a nicely satisfying neutral fruitiness to it (undoubtedly fruity but not in a way you could pinpoint a specific fruit likeness). A very satisfying finish.

For more on the American Brewers Association www.brewersassociation.org

For Jay Rayner’s Guardian review of Brat wander over here