It’s not often we get chance to mooch around a world class garden on our own doorstep, but our neighbours* at the American Museum & Gardens have just undergone a rather swish garden facelift and recently invited us to come over for a gander. The garden has been designed by Washington DC-based landscape architects Oehme, van Sweden and is the group’s first European commission. Notable previous commissions of theirs include The Garden of Contrast at Cornerstone Sonoma, The Native Plant Garden at the New York Botanical Garden and the Chicago Botanical Garden, all of which are characterised by bold, naturalistic swathes of grasses and perennials. Check out OvS’s rather impressive portfolio, here.

The 30 acres of undulating landscape that surround the American Museum still house the remnants of the old Italianate style manorial pleasure gardens, which dates from the 1820’s. Since the museum’s opening in 1961, the landscape has been dug, prodded and sculpted into its current form which features a replica of George Washington’s Mount Vernon Garden, an arboretum of American trees and a natural amphitheatre.

OvS’s design for the New American Garden takes inspiration from Monticello’s Winding Walk, and is designed to link the Manor House and the existing Mount Vernon Garden and to provide accessible routes to facilities across the museums hillside location.**

Here’s a few pics from our visit. Please excuse the slate grey skies and raindrops on the lens – for our visit, the weather was more akin to Weston-Super-Mare than West Virginia. 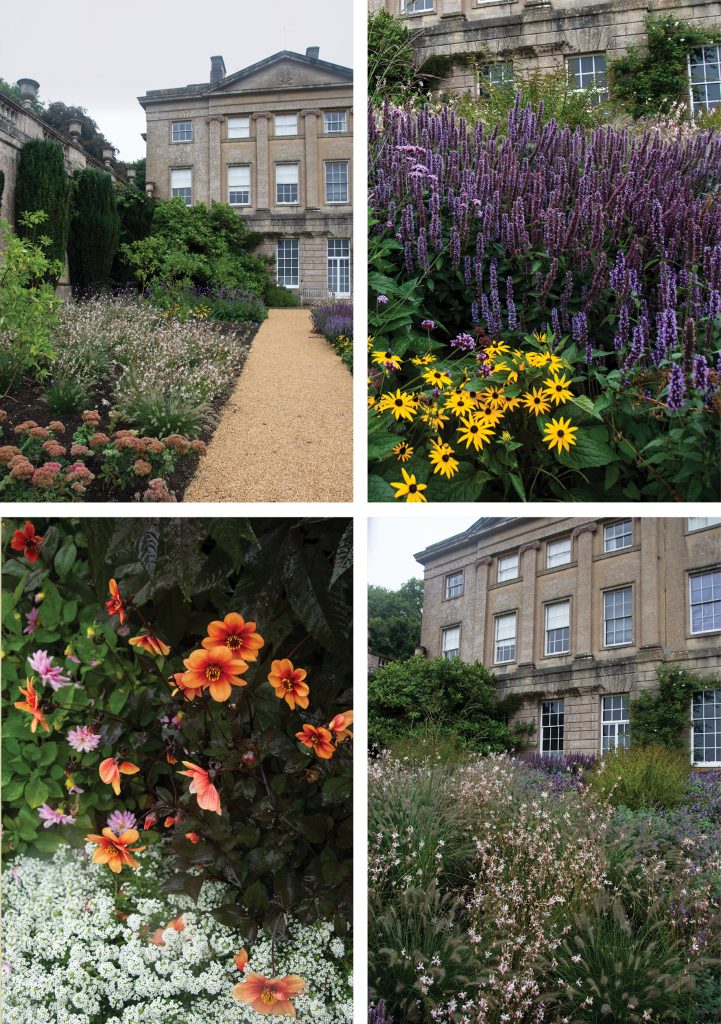 Views towards the Manor House, from the East Lawn. Over 12,00 new plants were used in the scheme. They include large swathes of Agastache, Dahlia, Panicum virgatum ‘Warrior’ (mixed with Eryngium agavifolium) and Agastache ‘Blue Fortune’.

The Mount Vernon garden. There are plans afoot to create a new vegetable bed to include heritage varieties of potatoes, beans and asparagus. To prepare the bed and to help break up the soil, over 140 ‘Jack o lantern’ pumpkins have been planted. Also note the (out of focus) eighteenth century octagonal seed house. Recently renovated, it sports a cedar shingle roof and wooden cladding which has been made to look like stone – a process George Washington referred to as ‘rustification’.

Bath’s American Museum & Gardens was first opened to the public 1961, and is the only museum outside the United States to showcase the decorative arts of America. Its permanent collection includes more than 200 historic American quilts, Shaker furniture, Native American artefacts and a huge collection of American folk art.

Prices for admission to the Museum, gardens and exhibitions are as follows:

* The American Museum lies just a stone’s throw from our allotment. We could probably hurl a Yarlington Mill apple through their conservatory window if we tried hard enough. On a windy day we can smell the Yankee Candles they flog in the gift shop.

** As you sashay through the gardens, look out for the bronze busts of key figures in American history, sculpted by Angela Conner. Rumour has it they’ve reserved a spot for President Trump’s bust at the back of the house, down near the bins.