A lot can happen in a quarter of a century. 25 years ago, in 1993, England failed to qualify for the World Cup in the USA, Mr Blobby spent a few weeks at number one and the Maastricht Treaty came into force, formally establishing the European Union. And in that time the pub landscape has changed dramatically, with a recent report claiming that more 25% of UK pubs have closed since 2001.

1993 is also the year that we both graduated from Coventry Polytechnic and last weekend we joined a small group of fellow ex-students to revisit our old stomping grounds. We’ve both fleetingly called in on the city on separate occasions since (once each, over ten years ago) but this was our first chance to explore those old pubs together since gleefully handing back our graduation gowns to the hire shop.

When we left we didn’t realise quite how many pubs we would be bidding farewell to for good. Among them, biker’s basement haunt The Godiva; Spon End favourites The Malt Shovel and The Black Horse; the rickety old Shakespeare on Spon Street; Gosford Street pub crawl destinations including The Golden Cup* and Hand & Heart; and stop off point on the way home, The Admiral Codrington.

But despite these boozer bereavements there still seemed more than enough pubs for a city of Coventry’s size, with some of our old favourites still in business and a large range of new establishments open to tempt the current younger generation in from the streets. The youth appeal of these flashier new bars meant that many of the student-packed pubs of 25 years ago were now populated by people of our own age, meaning we weren’t required to scrap our way to the bars with the younger and fitter folk.

Having visited many pubs over the course of the weekend we’ve picked out five that we think make for a great city pub crawl for anyone with a weekend to fill in Coventry. 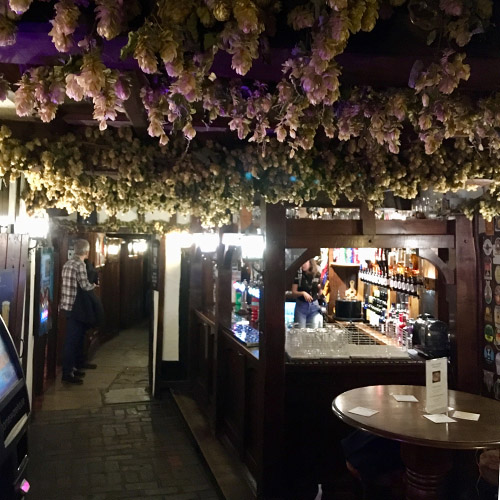 Dried hops hanging from wooden beams in the Old Windmill

Some things never change. This was our favourite pub in 1993 and our favourite in 2018. It’s believed to be Coventry’s oldest, a 15th century inn situated on medieval Spon Street, close to the city centre, with wonky walls, stone floors, exposed beams and various barrooms and snugs to relax in. It was always busy with a very mixed clientele enjoying fine cask ales and the occasional cider** and that still seems to be the case today. A proper old pub with a long history that, thankfully, is still run as a proper pub, rather than the kind of touristy, food-focussed, pub-museum that too many other ancient inns turn into.

We drank: Having visited the Old Windmill three times during our Coventry reunion we managed to get through all seven of the cask ales behind the bar. Classics Timothy Taylor Landlord and Theakstone’s Old Peculiar were in excellent condition and hardly bettered all weekend, while we also enjoyed Slater’s light and hoppy ‘1 Hop’ (the single hop being Goldings). 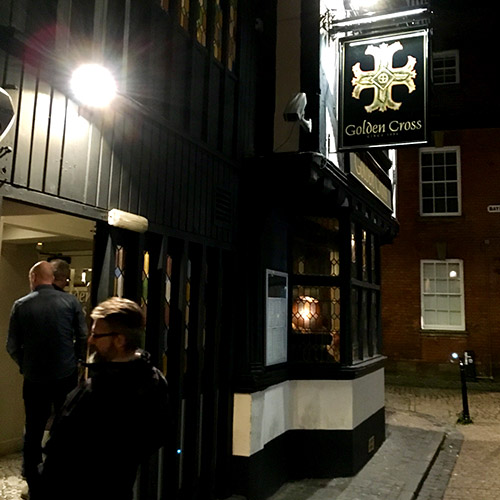 Another medieval pub that was built in the 16th century, becoming a public house in the 17th century, situated round the corner from the abbey. The upstairs bar was our Friday night meeting place and it was always heaving and had a great atmosphere and Ruddles beers behind the bar. It looked a bit run down when we last saw it over ten years ago but has recently been given a tasteful makeover, with glass panels and Farrow & Ball colours complimenting the wooden timbers and stained glass windows.

We drank: The upstairs bar had a much more limited selection than downstairs so we opted for the house beer, brewed by the Caledonian Brewery. It was decent enough but not quite up to the high cask standards set elsewhere. 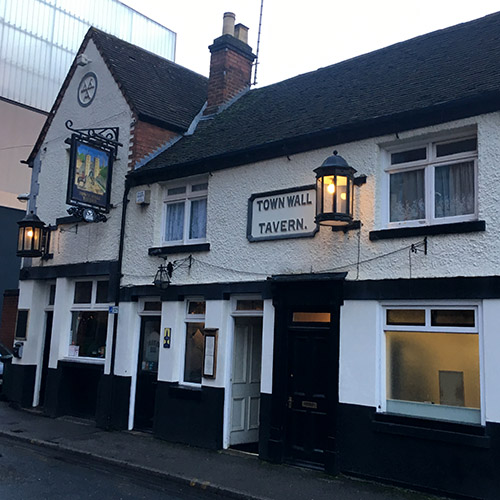 For some reason we don’t remember visiting this pub in the 1990s. Tucked around the corner from the Belgrave Theatre, Nick had a pint here on his only other trip to the city and made sure it was on the itinerary for this weekend. It’s an outstanding pub, perhaps second only to the Old Windmill, with a narrow room on one side of the bar, a more expansive lounge-ish room on the other and ‘The Donkey Box’ in the middle. This room has claims on being the tiniest in the country with its own bar and the regular occupying it shared a few tales about it while we were there (it was named after being visited by a pantomime donkey from the theatre).

We drank: Lots more decent cask ales to choose from here including Goff’s Cheltenham Gold and Purity’s Mad Goose, both light and fruity, perfectly suiting the mid-afternoon part of our day-long session. 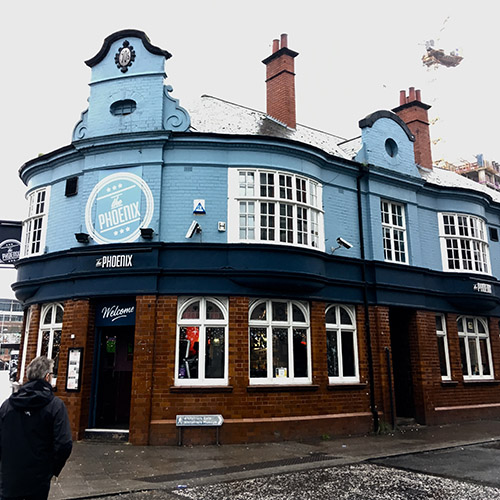 The Phoenix, better known to us as the Sir Colin Campbell

There are several other better Coventry pubs than The Phoenix, but it’s one we have a strong connection to and is the kind of place anyone can pop into at any time without feeling out of place. It was called the Sir Colin Campbell in our day (and the Parrot and Griffin long before then) and sat opposite our art college, beckoning us in for lunchtime halves and post-study sessions. It was also the kit sponsor of our football team. After we left, it went through a chequered period which included a major fire, before being reopened as The Phoenix – the symbol of Coventry University. Today it’s brightly lit with glitzy, modern pub ephemera and is full of TV screens, but it provided us with a relaxing distraction from the drizzle outside.

We drank: There were five keg and five casks on offer, mostly fairly mainstream. Nick played it safe with a Camden Helles while Rich was pleased with his choice of Robinson’s Trooper. 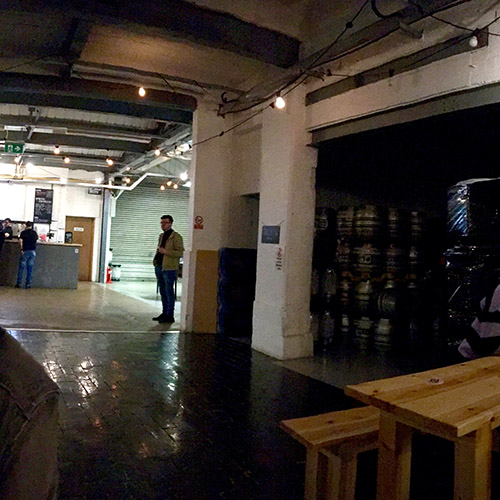 The Twisted Ale Brewery: a new tap room in a whole new part of town

Lucky Coventry. In our day there were no breweries to head to for a fresh pint. Now Coventry doesn’t have just any run-of-the-mill brewery, but one of our favourite contemporary outfits in the country, Twisted Barrel Ales. Just off Far Gosford street, which is now lined with ghosts of pubs, lies an assortment of modern food, drink, creative and community focussed businesses that is collectively known as Fargo Village (Far Gosford. FarGo. Got it?). Having moved from smaller premises opposite, Twisted Barrel occupy a good sized space, with piles of kegs separating tables and benches from the brewing equipment, and a bar with 20 keg taps. So impressed were we with this new addition to the city’s drinking scene that we trekked across the city for our final drinks on both nights.

We drank: We got through quite a range of our host’s beers with the tang of Detroit City Sour hitting the spot as well as anything all weekend. From further afield we enjoyed the rare experience of drinking Weihenstephaner’s Helles on tap which was fresh as a just baked loaf, crisp and thirst quenching – not a bad way to finish off a weekend of beer adventuring.