During a particularly destructive episode of DIY I liberated four drawers from the living room furniture. Not wanting to throw away good wood I figured they might make suitable frames for growing salad. The garden’s own salad drawers.

I’ve always previously struggled to grow supposedly simple salad ingredients – seedlings tended to get lost in the allotment mud or devoured by slugs and pigeons before I could harvest the leaves. But the salad drawers have been such a revelation that four wasn’t enough. With no more furniture to rob I took the saw to a few old shelves and knocked another out in no time.

1. Saw
You need to cut four planks that will combine to make a rectangle. Size doesn’t matter, so long as you have two pairs of planks of roughly equal length. Any timber will do, with palettes being a common favourite of gardeners.

2. Hammer
Bang the planks together with a hammer and nails. My new box is a bit wobbly, but lets call this ‘rustic’.

3. Stake
Put your wooden frame on a patch of cleared earth and bang a wooden stake into each of the frame’s four inner corners. You can cut these from thin strips of wood or use fat sticks. They will help secure it in place – particularly if your hammering, like mine, has been less than perfect.

4. Cardboard
Cut a piece of cardboard to roughly the same size as the salad box and lay it inside the frame. This acts as a biodegradable barrier against weeds loitering below the surface.

5. Compost
Fill the box with compost to an inch or so below the top of the fram.

6. Divide
If you have a large frame and want to grow multiple crops then it’s useful to lay down dividers. More strips of wood or bamboo canes will suffice.

7. Sow
Open a pack of seeds and liberally sprinkle on your compost.

8 Cover
Here’s a natty tip for you… cover the box with horticultural fleece pinned into the four corners. This keeps things warm, enabling you to make early sowings of salad, and also acts as a barrier against thieving pigeons. You don’t even have to remove it to water the plants. Don’t pin down too tightly so there’s a bit of room for the salad to grow.

Next, we’ll point you in the way of our five favourite salad box ingredients (coming soon!)… 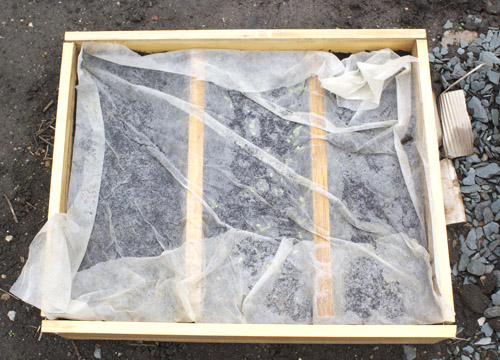 A wobbly salad box with wooden dividers and protective fleece