This year, for the first time, I grew, the fancy Italian chicory variety ‘puntarelle’. And how it grew. For a few months in early summer a relentless supply of long, slender green leaves added a bitter twist to just about every meal I cooked.* So when the chorus of “not more bloody chicory” became deafening it was time to dig the patch for a new crop.

But that didn’t spell the end for my new found chicory addiction. The best bit was yet to come…

A recent trip to Belgium introduced me to a typically boozy Belgian brew called ‘Wit Goud’ from Brouwerif Hof Ten Dormaal, a lightly coloured 8% ale in which a portion of hops are replaced with locally grown ‘witloof’ – aka chicory. And it tasted amazing. I’ve no idea how they used their chicory to brew with but I know that some brewers have used chicory coffee, made from roasted roots, to impart bitter earthy flavours to dark stouts and porters. So I settled on the following process to prepare the puntarelle roots for my own chicory beer.

How to prepare chicory roots for beer (or coffee)

1. My chicory roots were very long, thin, straight and hairy. After digging they received a thorough scrub, with stubborn strands getting shaved off with a sharp knife.

2. I  dried the roots with kitchen towel and chopped them into similarly sized chunks to ensure the received an even roasting.

3. These chopped roots were laid out on a baking tray, placed in an oven and roasted until dry. Annoyingly I didn’t make notes of the exact temperature (it was low) or time taken but, as with drying anything in the oven, it’s advisable to regularly check their progress to prevent burning. And anyway, the length of time depends on size of chunks drying, type of oven, and all sorts of other random factors…

4. Seeing as I was aiming for a bitter pale ale I didn’t want my roots to receive a dark roasting, so as soon as all the moisture had evaporated they came out of the oven (to test them make sure there’s not the slightest hint of flexibility or chewiness remaining).

5. To apply the chicory flavour to my ale I decided to first make an infusion (ie. chicory coffee) which I added five minutes from the end of the beer boiling phase. This coffee was made by first grinding the chicory with a mortise and pestle, then infusing it in boiling water, before straining off the hot liquid. Just like regular coffee. For my one gallon batch I made a single mug of coffee from three heaped teaspoons of ground chicory.

So, how does it taste?

Happily I can report brewing success. The chicory pale ale has the familiar beery flavours of one of my regular home brewed pale ales – after all, it still contains the usual malt and hop ingredients – but there’s an extra deep lying bitterness that comes from the chicory. It’s subtle at first, but lingers in the mouth for longer than the hop bitterness, rewarding you with an increasing intensity of bitter flavour the more you drink. 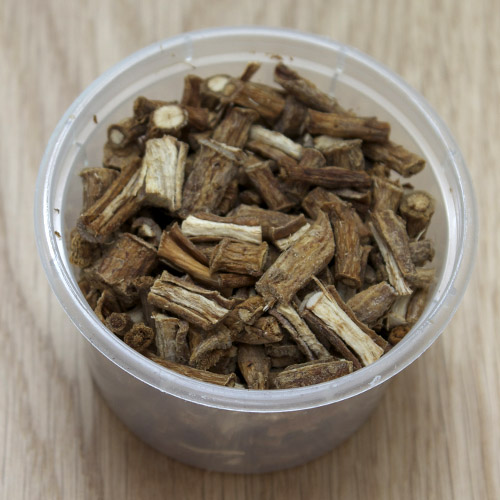