A few weeks ago we were contacted by London booze makers par excellence, Portobello Road Gin, to see if we were interested in sharing one of their ‘drink your garden’ cocktail recipes with our readers. We like to drink as much of our garden as possible, so how could we say no?

With gardening and cocktail making both undergoing a renaissance, the idea behind these recipes – based on Spanish style ‘copas’ – is to use ingredients growing in the garden as a flavour or garnish for a gin based drink. The cocktails are currently served at the Portobello Star in London and Pintura in Leeds, but rather than keep the recipes a secret, they’re generously sharing them with the gardening fraternity.

Having scanned their recipe list our eyes alighted on ‘the vegetable patch copa’, which deploys the carrot as its magic home grown ingredient, and not only are we sharing it with you, we’ve even test driven it ourselves.

1. Place the ice into a large red wine glass.

2. Take the baby carrots and extract the juice using a juicer.

3. Pour the juice over the ice then slowly add the gin and the tonic, give it a gentle stir and garnish with a basil sprig and a sprinkle of juniper berries.

That’s how it’s meant to work, but to get our cocktail from garden to glass we had to slightly tinker with the method…

For starters, we don’t have baby carrots. They’re either too grown up or too embryonic to be considered babies, so we selected four long, slender carrots instead. And we don’t have a juicer. It was fed too many hard apples during a lazy spot of cider making and threatened to blow up the kitchen before spluttering to death in a cloud of pomace and smoke. The necessary juice was winkled out using a combination of kitchen blender, mortar and pestle and aeropress coffee maker.

Apart from that, the rest was as written and the finished cocktail guzzled with relish – the carrot giving the booze a vivid orange appearance but just a subtle, sweet carroty flavour to complement the exquisitely crafted gin.

Go on, put a carrot in your cocktail this summer. 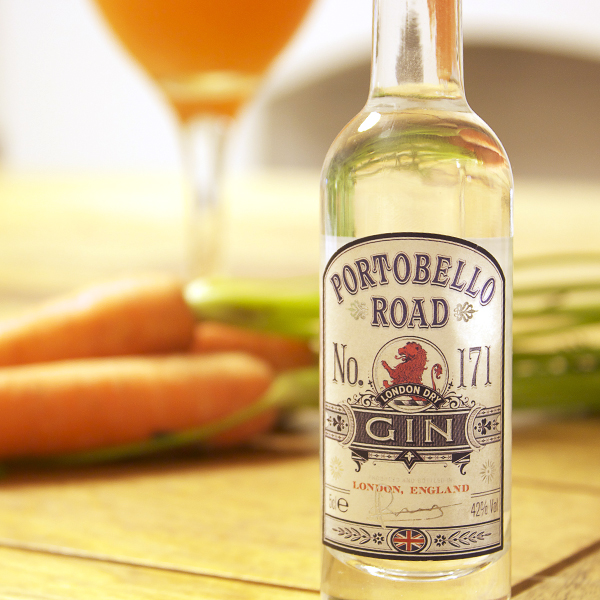