For us, the raspberry is a strong contender for the accolade of ‘world’s greatest berry’. The fruit bearing canes are easy to grow and produce an abundant crop of deliciously tart pickings, no matter how much we deprive them of nutrients through laziness and ignorance.* Having shorn our raspberry patches of the higher maintenance summer raspberries** we’re left with the plumper autumn varieties. And, right now, the canes are raining fruit.

Hardly any desserts during this raspberry heavy period reach the table without a red splash tarting its way into the picture, and breakfasts have become large servings of raspberries topped with a sprinkling of muesli. I’ve even taken to dotting raspberries between the slithers of salami on my pizza***. But that still leaves us with a vast berry surplus.

We don’t like waste at the best of times, and are certainly in no mood to squander precious berries when, in a few weeks time, there will be no more. Instead we rely on these helpful tips that will not only use up that raspberry glut but will keep you feeling fruity long after the last berry has been harvested.

You won’t be surprised to hear that our number 1 use of raspberries is in booze making. Their fruity acidity makes them a drinks maker’s best friend and there’s hardly a beverage style that can’t be given a lift with the stuff. Our book contains recipes for an easy to make raspberry beer (that’s it brewing in the picture above) and a winter warming raspberry and thyme whisky. Elsewhere on this site we show how to make raspberry vodka (great for plunging in a trendy glass of prosecco). And further afield on the web a quick google search should reward you with recipes for raspberry wine, cocktails and more. We’ve even mixed our drinks by chucking the vodka soaked berries from a liqueur infusion into some of our prized farmhouse cider, christening the resulting mix ‘rumpy’.****

Not only is raspberry jam one of the finest preserves you can spread on a slice of toast, it’s also one of the easiest to make yourself. Put the same weight of fruit and sugar (use the stuff with added pectin) in a pan, squeeze in some lemon juice, bring to the boil and let it bubble for 10 to 15 minutes, mashing the berries as you go. Store in sterilised jars and the job is done. We’ve made so much raspberry jam that we’ve started mixing it up with other flavours. Apples pair up particularly well and for an additional spicy flavour try adding a touch of cardamom.

One of our stock answers to the “what can I do with surplus…?” question is “pickle”. We have yet to try pickled raspberries (although we don’t doubt they’ll work) but we have made plenty of the unusual sounding raspberry vinegar. It’s a lovely thing to dash over a salad; a few drops on an ice cold, creamy dessert is surprisingly welcome; and it’s a great pan-deglazer for rich meat sauces, especially game. To make your own you simply soak 400g to 450g of berries in 500ml white wine or cider vinegar for a couple of days, then strain into a pan, add a bit of sugar to see off the rough edges (around 50g should suffice) then bring to the boil and simmer for 10 minutes before scattering over whatever takes your fancy.

If the thought of slapping vinegar over your honeycomb and pecan ice cream makes your face turn sour, try making a more traditional sweet syrup instead. Not only does this add a touch of red glamour to the pudding bowl it’s also a useful addition to any number of fruity cocktails – daiquiris, collins, blushes, fizzes, sours… the list is endless. Heat some sugar in the same volume of water until it has dissolved, then add raspberries to the pan (the same volume as the water, or a few more for an extra fruity syrup). Mash, infuse (for an hour), strain, bottle, pour, shake, sup, pour more, shake more, sup more, hiccup, snooze, etc…

You can, of course, freeze your surplus raspberries and make any of the above at a later date. But you don’t need us to tell you how to do that…

*The old canes get shredded and fed back to the raspberry patch, and that’s about it.

***I think I once saw Hugh Fearnley Wittingstall do that on the telly. Whatever, it’s not as bad as it sounds.

****If you haven’t yet worked it out: raspberry + scrumpy 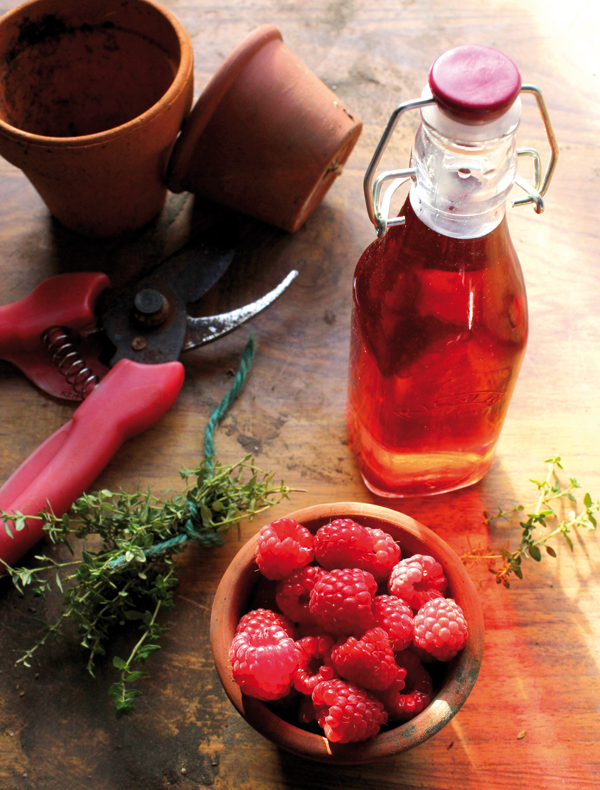 Rasberry and Thyme Whisky, taken from ‘Brew it Yourself’