If Top Trumps ever decide to make a hipster beer edition of their games cards*, Lucky Jack would be a card worth owning. Hipster location score? Every craft beer collector wants a good dose of Scandinavian booze and this one hits the lucky jackpot, hailing from the South West coast of Norway.

Trendy packaging? Here we witness the perfect blend of modern and retro in cool blue, embellished with an illustration of a salty bearded gent. Oh, and it comes in a very much on trend 330ml can.

And what about the hops? Go celebrate a triple scoring success with three of America’s most hip, happening hops: amarillo, citra and chinook.

It pours a lovely pale, cloudy peach colour, complete with a smoky whisp of beery head, but how does it score on the only category that really matters? Taste.

Lucky Jack is a light, refreshing American pale ale with good blend of malt and hop flavours but contains nothing too dominating or overpowering. The initial burst is of citrus fruits, particularly grapefruit, accentuated by the matching juicy aroma. As the beer’s light carbonated fizz tingles and subsides a delicately sweet, grainy malt flavour nudges the hops to one side before a lingering bitterness nestles on the back of the tongue.

There’s nothing unusual or unique about this beer that will reward it with bonus points, but that doesn’t mean it’s not a mighty fine beer. It’s going to be a high scoring ace in that hipster beer pack. 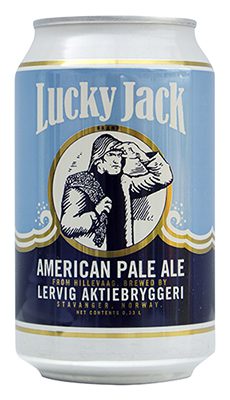 Save a tenner on your first Beer52 box!

If you like the sound of Beer52 and fancy getting a £10 voucher off your first box then your luck is in – we’ve got hold of a special voucher code for you. Simply enter ‘THIRSTY10’ when prompted by their website www.beer52.com