We don’t normally blog about an evening down the pub, but a social get together in Bristol last night was interesting enough that we’ve decided to break that habit. We were at The Mall in Clifton, a large pub that has been neatly spruced up, features a great range of cask and keg beers, an ample beer garden and some of the comfiest leather pub seats our gardening-weary bodies have reclined in.

The Mall is one of several pubs throughout the land to host a Craft Beer Residency featuring a rotating range of 20 beers from three outstanding Californian breweries: Sierra Nevada, Stone and Anchor. We met two of our Bristol chums – Dav and fellow booze author Andy Hamilton – along with Nikki from nearby Portishead who helped put the Residency together.

Four of the beers were available to us last night – two each from Sierra Nevada and Anchor – and we think they were worthy enough for us to blog about them. Nikki was driving and didn’t join us on the booze, and Dav is a recently diagnosed coeliac so settled for Caple Road cider instead. Which left three of us to come up with the following tasting notes…

Sierra Nevada’s Pale Ale is one of the American beers that was responsible for switching the world’s brewers on to the amazing flavours of US hops and kick-starting the global craft ale movement. They hardly put a foot wrong with their pale ales and this sessionable IPA was American perfection, with a full flavoured golden grain body highlighting the hoppy marriage of citrus and pine. “Spot on” announced Nick “can I drink this all night?” (“No” was the answer).

This was the most unusual of the beers available – a gose with lime and agave. The gose sourness was suitably light with the lime instantly prominent and the agave more subtle (“I can almost taste it” Rich declared and, despite this being nonsense, we know what he meant). Andy wasn’t sure of it at first but it steadily worked his magic on him and, on completion, announced “it’s alright”. (Trust us, that’s praise).

This wheat beer was nice and dry and loaded with refreshing tropical flavours of sweet mango and some citrussy offerings. If we were drinking this outside we might’ve asked for it to be served in large jugs – it had the refreshing sweet-and-dry qualities that go down a treat under a hot sun (and hot sun was very much in evidence yesterday).

This lager was ‘reborn’ in 2012 and we think it already deserves the status ‘American classic’. We’ve already featured it on this site, describing it as a “perfect fridge standby”, and it performed equally well in the pub with its crisp, cold bready lager body pepped up with touches of spice and pine from the hops. The last of the four beers we drank and, on aggregate, the one that came out top and caused the most envious grumbling from Dav about his cider.

For more information on Craft Beer Residencies, check out the website www.craftbeerresidency.com 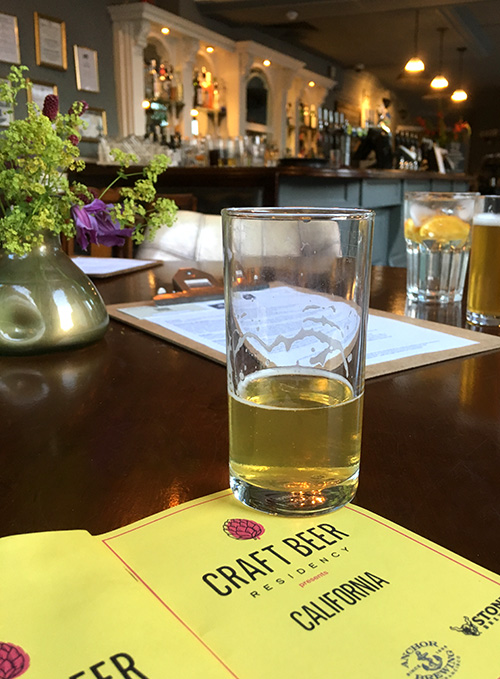