No trip to the supermarket is complete without a mooch around the booze isle, with extra lingering reserved for the beer section, scanning the labels in the hope of finding something new. Invariably it’s the same range as the last visit but, even when I don’t need beer, a bottle or two usually pulls itself towards my trolley like a malt-to-metal magnet.

We like to write about some of our favourite supermarket purchases at fairly regular intervals on this site and, up until now, have covered most of the major stores with one obvious exception: Tesco. This is not through any discriminatory policy but rather that neither of us live anywhere near a Tesco, so rarely get the opportunity to dally in their beer aisle.

A few weeks ago I received an email from ‘The Tesco Beer Team’ telling me how excited they were about the new range of canned craft ales hitting their stores. I saw my chance to peruse some Tesco beers without even leaving the house, sent them my address and was soon admiring five cans of finely crafted booze.

The full range includes three beers from the excellent Vocation brewery (Life and Death IPA, Heart & Soul Session IPA and Pride & Joy American Pale Ale), a brace from Adnams Jack Brand range (Dry Hopped Lager and Crystal Rye IPA), Brooklyn Brewery’s East IPA and Pistonhead Amber Lager. But the one that got me most excited was an American import, Anchor’s Californian Lager – a classic beer that I had yet to experience from a can.

If anyone stills doubts America’s excellent brewing heritage then point them in the direction of the Anchor brewery. They’ve been knocking out beer under the Anchor name since 1896, having originally been established by German gold rushers 25 years earlier. Although I can’t vouch for the quality of their output from over a century ago, they’ve certainly enjoyed a great reputation in my lifetime.

Their most famous beer, Anchor Steam, has been a sating thirsts throughout this time, only pausing during the prohibition years, and in the early 1970s the brewery began expanding its range, staking a claim to be one of the original craft breweries that inspired the West Coast beer explosion.

Anchor’s California Lager was first brewed in 2012, based on a Californian lager recipe dating back to 1876, and uses the most popular hop from that period, Cluster. Canning the beer has worked a treat. It is the epitome of a simple lager done well. Sweet on the nose, smooth in the mouth and lightly spicy on the tongue. No crazy hopping; no meddling with the malt; just a clean, refreshing taste that makes you wonder why more lagers aren’t made this way.

It’s a great beer for any occasion, which makes it a perfect fridge standby: keep a stash by the milk and cheese and break one out whenever the mood strikes. Next time you’re in Tesco, fill your basket – and please drop off a few for me on your way home…

Thanks to The Tesco Beer Team for the booze 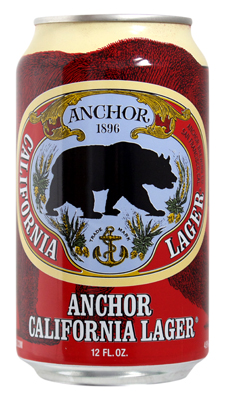