We were contacted recently by a PR company, asking if they could send us some curry to try. The answer to this question was – and always will be – a resounding ‘yes’ (followed by a ‘how fast can you get it to us?’ email, typed out to the reverberating, gurgling sound of an overexcited intestine).

Daydreams of curry trucks pulling up outside TTG HQ and hose-ing in chicken dhansak through the letterbox quickly evaporated when a small package arrived through the post, containing the building blocks necessary to construct a Japanese katsu* curry. One pack of rice, one pack of Japanese breadcrumbs (panko) and a pack of curry sauce.

This kit-form katsu required a bit of basic cheffery to knock it into shape. Nothing too taxing though – just the attendance of a sliced onion, a few pieces of chicken and a familiarity with the basics of hob-based, deep fat frying.

Now unless you count a few games on Cooking Mama (and the unfortunate incident when I miss-timed the oven and served the kids ‘sushi fish-fingers’) my previous experiences of Japanese cookery have been few and far between. Despite my culinary shortcomings, the katsu curry construction was easy – I even managed to overcome my fear of frying and successfully cooked the breadcrumb-coated chicken without setting the house ablaze, or Jackson Pollock-ing my flesh with scalding oil.

Behold the results below… 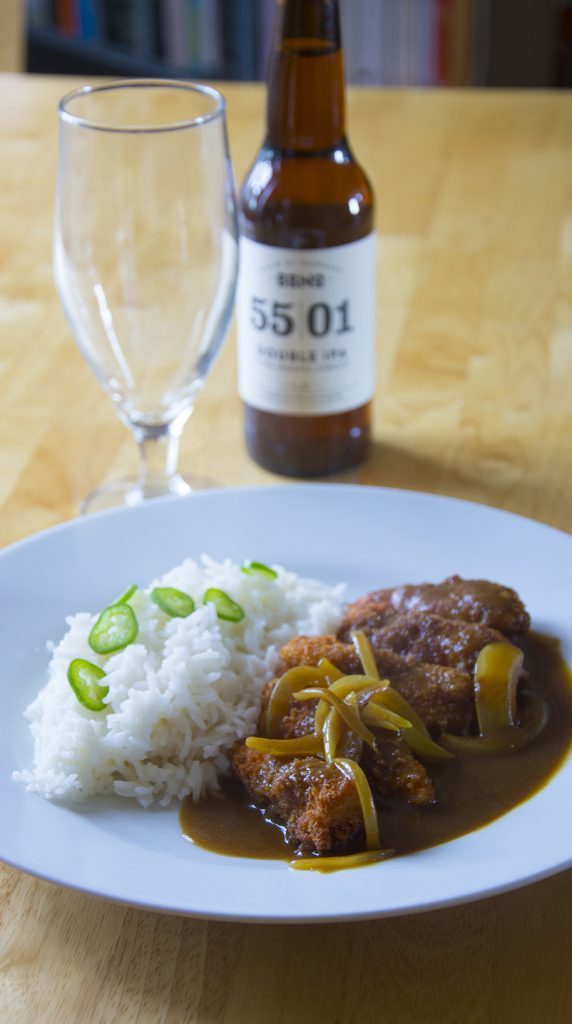 Tada! One nicely presented (if not entirely photogenic) katsu curry, ready for gobbling. But what booze to serve with this piquant dish?** For the answer, I took to Twitter.

Now, as we are all too aware, ‘asking the public to vote for things’ hasn’t particularly gone that well of late, but fortunately, our sensible Twitter pals avoided a Trump/Brexit style reaction*** and fed us some sensible results. 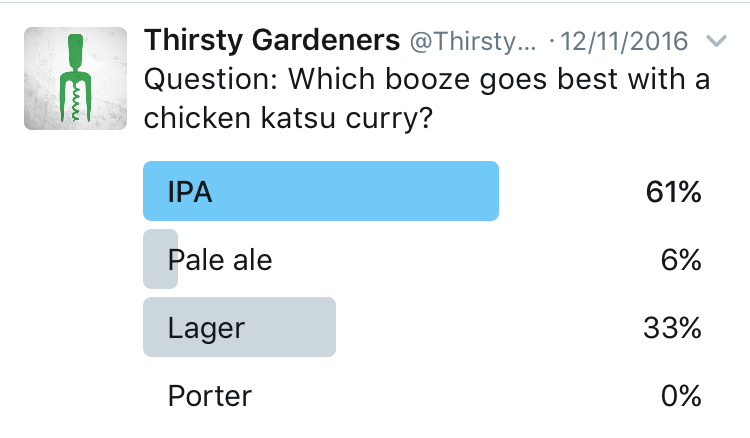 It  was a resounding victory for the IPA, blazing a blue trail ahead of the second most popular choice – lager. A few folks voted for pale, whilst no one was foolish enough to plump for the porter wildcard.

There were a couple of likely IPAs giving me the glad eye from the beer cupboard shelf, but I decided that the only thing that would satisfactorily slice through the fiery Japanese spices would be an American style double IPA. Specifically, a Brew By Numbers*** Double IPA, straight outta’ Bermondsey.

Fortunately, for all concerned, the match was a good ’un. My crudely constructed katsu sauce was a smooth, gravy-like affair (not a million miles away from a chip shop curry) that wrapped and caressed my bread crumbed chicken in a soft, piquant blanket. The curry packed a decent amount of heat, but not with the initial up-front fire you can get from an Indian curry – this was more of a slow-burning, forehead-beading warmth. The double IPA’s clean, citrus-y bite providing a fine foil to the dish, and whilst undeniably hop-forward (BBNo have dry hopped this one four times) its hoppiness is quite restrained – certainly not an eye popping hop-monster that you might come to expect from this style of beer.

I did, however, make one tiny error in my beer/curry equation. Partially number blinded by the big black digits on the BBNo beer label, I overlooked the most important number of all.

A BBNo Double IPA weighs in at a lusty 9.2%. That, combined with an enormous*****, mid-day katsu and a ‘bit of a sit down’ in front of Homes Under The Hammer, and there can be only one outcome…

Brew By Numbers rotate their range quite a bit. The Double IPA above came from an unknown source, and had been lurking around in my beer cupboard for a while, hiding behind a brace of feisty Somerset perries for safety. It’s worth checking their site often, to see what they’ve recently cooked up. 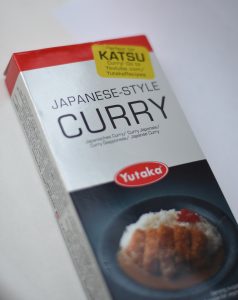 * Katsu is short for katsuretsu, the Japanese word for cutlet.
** Admittedly, there’s a rather big clue in the photograph, but bare with us…
*** “Screw your guys, we want change! We vote for petrol! Give petrol a chance! What’s the worst that can happen…?”
**** Not to be confused with ‘painting by numbers’, the popular painting system favoured by retirement home dwellers and the artistically inept.
***** Turns out the pack I used makes enough curry for six helpings.