A few weeks ago Rich proudly announced that he had started a new series called ‘cocktail corner’ by publishing his recipe for the Martini. I knew nothing of this until he sent me the feature with the words ‘your turn’.

So here’s my first contribution – the dead easy ‘Old Fashioned’. Your turn next, Rich…

Brief History
For this recipe we’re traveling back to 1806 and the first documented definition of the word ‘cocktail’, which appeared in an edition of the weekly newspaper The Balance and Columbian Repository and was described as a mix of spirit, bitters, water and sugar. Over the decades, combinations of these liquids went in and out of fashion, so when their popularity rose in the 1860s they were referred to as ‘old-fashioned’ cocktails.

The first known mention of a specific cocktail under the name ‘Old Fashioned’ was said to have been served in Kentucky at the Pendennis Club. Although various whiskeys had previously been used to create similar cocktails, this first recorded version used bourbon. So it’s bourbon we’ll use in ours.

After a bit of an identity crisis the Old Fashioned is back in vogue, largely thanks to it being the manly booze of choice for brooding ad-man Don Draper in the telly show Mad Men.

How to make an Old Fashioned.

What you’ll need:
2 oz bourbon whiskey
2 or 3 dashes Angosturas bitters
A lump of sugar
A splash of water
Ice

It’s worth getting a decent whiskey for an Old Fashioned as it’s the whiskey that does most of the work. We’ve chosen an authentic Kentucky bourbon, produced by Wild Turkey, that has been aged for 6 to 8 years in oak barrels and has soft honey notes and punchy spice flavours.

1 Drop a lump of sugar (or half a teaspoon) into an Old Fashioned* glass and squirt two or three dashes of bitters onto it, along with with a splash (teaspoon) of water.

2 Crush the sugar in the manliest manner you can muster.

3 Casually hold the rim of your glass and swirl with an air of nonchalance for effect.

4 Add an ice cube or three and pour in the bourbon.

5 Give it another swirl, summon some sort of manly pout, and sip with furrowed brow.

You may have noticed from the photograph that our Old Fashioned is un-garnished. This is because there was no mention of garnish in that original cocktail recording. In 1833 nutmeg gets a run-out for Team Garnish and in 1895 an Old Fashioned recipe includes a ‘piece of lemon peel’.

Contemporary Old Fashioned cocktails often include a slither of orange peel or a full orangery slice and sometimes they’ll insist on a cherry as well. This fruitiness likely comes from the prohibition era when such flavours were added to disguise the liquor – not only did drinkers want to make it look less like booze, but the illegal alcohol available usually tasted nasty. We’re using decent, legal bourbon so no disguise required.

You can substitute the bourbon for any other form of American whiskey or be like a Wisconsinite and use brandy – in which case you had better call it a ‘Brandy Old Fashioned’. Heck, these days you can probably use whatever spirit you like and get away with it, but we would prefer not to go there. And nor will be performing another modern twist by substituting the water with a load of club soda. We want to taste the bourbon…

If you want to show off something you’ve grown yourself in this cocktail then you’ll have to go down the fruit garnish route. If you haven’t got a cherry tree to pluck from then next best is a raspberry. It’s also red, goes well with whiskey and can be skewered on a cocktail stick for a fancy touch. 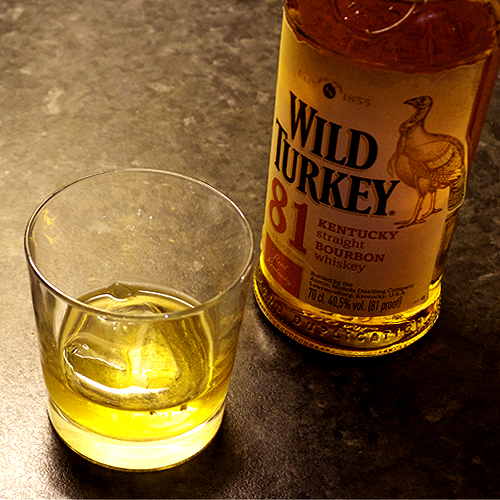 * The short tumbler used for various cocktails was named after the drink. My glass is probably a little bit bigger than a proper Old Fashioned glass, but you will notice other photographers have filled their glasses with more than the prescribed measures to make them look a little more photogenic. Do not be tempted to follow suit – this is very much a short cocktail.