One of our most recent ‘Top 10’ beer pieces for our regular paymasters, The Independent, was on the wintery subject of porters and stouts. We both have an appreciation for well crafted black boozes and gleefully drink them all year round, but their toasty tastes really come into their own when the nights are long and Jack Frost is busy sweetening our parsnips.

In order top come up with our list of ten champions we sprung open a lot of cans and bottles, roughly dishing out the duties as follows: I tackled Europe; Rich battled with the rest of the world.*

Throughout our lists we like to include as much variety as possible. In this selection five countries were represented – England, Belgium, America, New Zealand and Japan – and style variants included traditional London porter, milk stout, plum porter and super-strength imperial porter.

Unfortunately, ten isn’t nearly enough to showcase the full global diversity of porters and stouts available and plenty of ace boozes missed out. Perhaps most notable was the lack of representation from stout-mad Ireland, and none of our chosen ones reflected the recent trends of plunging smoke or chilli into the drinkable darkness.

So this week we’ve decided to rectify matters by featuring a porter that was not only brewed in Ireland but contains both smoke and cayenne chilli. Step forward Metalman’s Heat Sink and lets see how you shape up…

It’s black, has an off-white head and tastes of roasted malt. Those are the easiest boxes successfully ticked. The beer’s body is towards the thinner end of the porter spectrum but that’s perfectly acceptable to me – some folk will heavily mark down a dark ale if it’s anything less than a treacle consistency, but there’s no reason why black beer should be thick. There’s a slightly sharp fruitiness at first and it dries out with a coffee bean finish. In porter terms, it’s a job well done.

This beer won’t clog your throat with a full intake of bonfire smokiness, but the smokey aromas and tastes are obvious from the start. And as the other flavours drift away it’s that smoke that lingers longest. It’s a light charring rather than full on ash and it works a treat.

At first you may find yourself asking “what chilli?” But be patient. A third of the way through and there’s a faint murmur of heat on the tongue; further down the line the mouth has definitely warmed up; and come the end at least a couple of endorphins have been released in a mild chilli joy. As with the smoke, subtle is the word, but once again it’s a success.

This is a straight up, unfussy porter given some interest with a mellow smokiness and warming chilli. While it failed to make our top ten it joins a cast of hundreds parading in the ‘just missed out’ category. Good stuff. 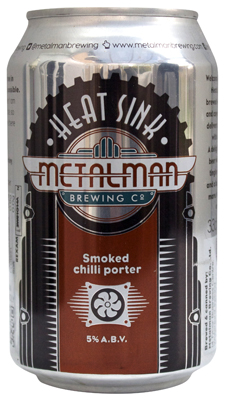 Our IndyBest porters and stouts

*Although I ‘accidentally’ put Oskar Blues’ Ten FIDY on my tasting list, one of the finest American imperial porters you’ll find.