Duvel isn’t known as ‘the Champagne of beers’ for nothing. It is a drop of Belgian beer gold. A frothy, flavoursome brew that slips down far too easily for one so strong: a trap we’ve fallen into on far too many occasions* and are likely to repeat again.

For the past few years Duvel Moortgat’s Master Brewer, Hedwig Neven, has been getting a little creative with his prize booze, by chucking an additional hop into the mix for annual limited edition ‘tripel hop’ beers. In previous years these bitter bonuses have been familiar to hop spotters (Amarillo, Citra, Sorachi Ace, Mosaci and Equinox), but this year he has gone for something a bit more special: an experimental hop that’s so new it doesn’t even have a name.

Referred to as ‘experimental hop HBC-291’ it hails from America’s Yakima Valley and has first been added to the main brew and later dry hopped for extra aroma. Sneakily he has also increased the beer’s strength, bringing it up to a giddy 9.5% ABV. Being adventurous types we decided to give this new hop a scientific taste test, guzzling first a Duvel and then a Tripel Hop beverage in one boozy sitting. We each made our own tasting notes independently of each other and have shared them below. But be warned, they may contain drunken rambling…

The environment in which a beer is drank can have a big effect on the drinker’s appreciation of the booze, so we noted where and when we drank the goods. Nick settled down on his sofa on a Friday evening, keeping an eye on his iPhone to follow the Masters Golf while some crap Friday night TV flitted away in the background.

Rich cracked open his Duvel hoard the following evening, sat at the kitchen table in front of the computer, with a double sporting bill of Match of the Day and boxing lined up. For company he had the cat buzzing around, moaning for food.

Pre-drinking food:
Nick’s intention of eating a neutral tasting pre-beer meal of vegetarian pizza was ruined by the addition of hot habanero chilli sauce. And a filthy piece of garlic bread. Amateur. Rich showed equal disregard for looking after his taste buds by devouring tripel portions of veg chilli and vowed his “ever expanding beer gut dictates there shall be no salty snacks eaten tonight.”

Glass used:
Neither Nick or Rich own a Duvel glass. Nick’s closest match, an unbranded tulip glass, was in the dishwasher so he used an Orval glass instead. Rich couldn’t decide between a Craft Beer Rising Foxy glass and an airloom Babycham glass.

First up, the Daddy of Belgian boozes. Pure, unadulterated Duvel. A whole bottle each…

The pour:
Nick noted how the Duvel “bursts into frothy life on hitting the Orval glass, but was successfully filled to the brim” while Rich’s initial pouring was a little more troubling. “Opted for the Babycham glass but, due to the pathetically small capacity, now pouring it into the foxy glass.” He also commented on the instant head of foam, declaring it “fine and upstanding, like Jedwards haircut.”

Appearance:
Both Nick and Rich noted the pale golden colour, the pristine head of froth and lots and lots of beautiful boozy bubbles…

Aroma:
A first sniff of the beery liquid sparked instant nostalgia. Nick noted “the unmistakable whiff of Belgium” while Rich was reminded of “the smell of hangovers.” Both commented on the yeastiness, with Nick detecting hop spices while Rich’s nostrils twitched to a touch of fruitiness.

Mouthfeel:
“Soft and foamy on the lips; sharp Champagne fizz on the tongue” according to Nick. Rich was more concerned by the sudden taste of alcohol.

Taste:
“Magnificent” and “masterful” were Nick and Rich’s first impressions. Nick elaborated with notes of “pithy lemon bitterness, spice, and the unmistakable taste of Belgian yeast”. Rich was more concerned by the continuing taste of alcohol.

With a familiar 8.5% beer polished off it was time to delve into unknown territory with extra booze and extra hop flavours. Another bottle each…

The pour:
Nick noticed less sudden frothing which he put down to “second pour syndrome” while Rich was more intent on noting his own pouring success, describing it as “textbook.”

Appearance:
Nick lazily jotted down “looks the same” so it was down to Rich to scrutinise for any differences, noting “vigorous, almost aggressive bubbles. Might be paler in colour to the last Jedward head.”

Aroma:
Evidence of the affects of alcohol are beginning to show in both tasting notes, with Nick bizarrely writing “similar, but concentrate hard enough and you can detect a faint essence of Turkish Delight.” Rich got even more carried away with the olfactory sensation, describing it as a “hoppy hit, more pronounced than the regular. Yeasty, less fruity. Smells amazing. A riot of hoppy, floral smells. Would wear this as aftershave if (a) I wore aftershave and (b) shaved.”

Mouthfeel:
“Similar but harder” was Nick’s unhelpful assessment but, thankfully, Rich’s response was more elaborate. “Not as viscous. Cleaner. Seems slightly calmer in the mouth. Dryer, for sure.”

Taste:
Nick reckons he could “notice the extra booze” and felt it had “a more instant bitterness and grainy flavours. Still a bit spicy.” He then returned to his daft North African theme, droning on about a “strange clash of bitter acidity and perfumed oil that you get in Moroccan tagines.” Rich started to ramble. “Sharper. Doesn’t taste as alcoholic at first, but the familiar burn makes its presence known. Definitely a grower. With each mouthful, hoppy bite and alcohol reveals itself. The cat has returned through the catflap, after pretending it has been out hunting, rather than relieving itself in my raised bed.”

Alcohol may have started to take its toll on their senses, but both beers were extremely well received. Nick whined about “fuzzy eyes. Struggling to read golf scores” while Rich’s boozy deterioration was more pronounced. “Feeling rather pissed” he scrawled. “Emotional. Just. So. nice. Sniffing the glass right now.”

Through his beer haze, Nick just about managed to sum up the Duvel differences, albeit without making much sense. “Duvel lives up to its ‘Champagne of beer’ tag, while the Tripel Hop was an angrier offering, like Champagne with girders.” On the other hand, Rich’s notes descended into the whitterings of a booze-addled madman. “Forgot how bloody good Belgian beers are. Easy to get carried away with American xxx, but the Belgians. Peerless. Heres a beer. Undersated genius. Making it look easy. I bloody love you, duvel, And your green brethren. Swear not to take you for grsanted. Want crisps. What about breadsticks. Breadsticks are OK. How about humus dips? Is AMtch of the Day still on? The boxing has started. Cant afford the pay per view. Wheres the radio. Gonna text Nick on how much I love Duvel” 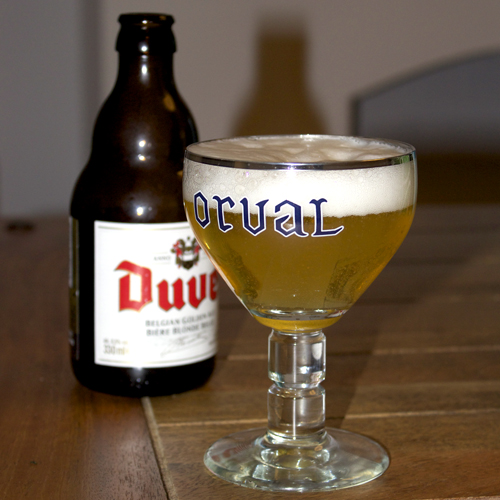 Nick uses the wrong glass for his Duvel 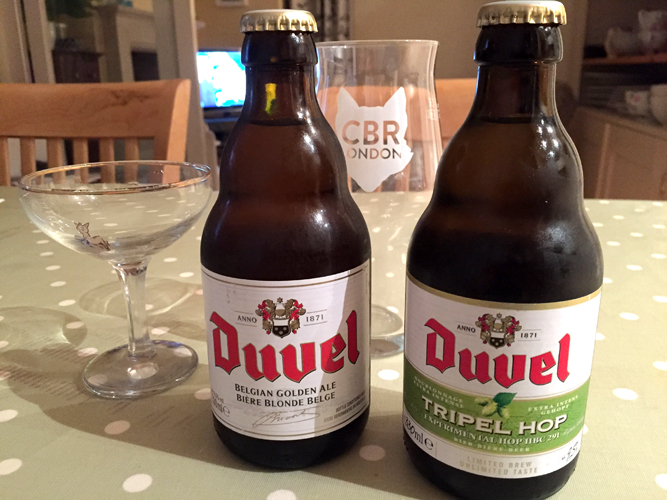 Rich contemplates which wrong glass he should use for his Duvel

*Ask Rich if it’s a good idea to run up a Flemish sand-dune with a Duvel induced hangover.

Thanks to Rupert Ponsonby for securing the booze for our tasting session. 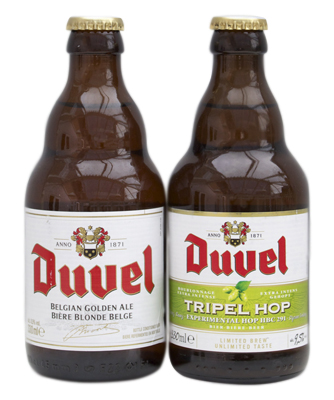